A crown jewel of the Pacific Northwest, Hurricane Ridge is an epic 17-mile ascent topping over 5200ft amongst the massive Olympic Mountain Range. PEZ climbs to discover that some rides are worth trading the heart rate monitor for a camera.

As the summer swelter finally subsides and the lingering days slowly escape from your after-work rides, you’ll find October- might be the most underrated riding month of the year. With no more summer holiday traffic to clog the roads, crisp, clear mornings and long-shadowed afternoons, October is the ideal time to do that last big ride. It’s a final chance to unload the fitness tank before relinquishing your summer form for that of something closer to jolly ol’ St. Nick. 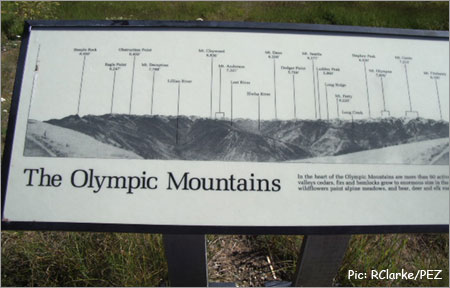 I use this time of year for my annual assault of Hurricane Ridge, a 17-mile (27km) uphill onslaught peaking at 5242ft atop the breathtaking Olympic Mountain Range in Washington’s scenic Olympic Peninsula. 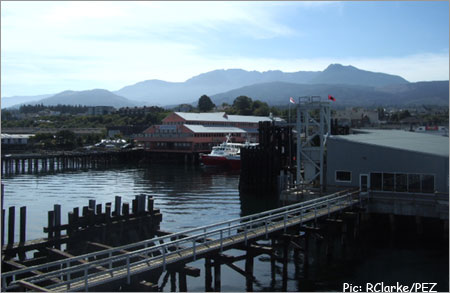 Port Angeles sits in the northwest corner of the Pacific Northwest, nestled between the Straight of Juan de Fuca and the Olympic mountain range.

Based in the seaside town of Port Angeles, WA, the climb is most often accessed by the M.V. Coho ferry from Victoria, BC. The 2 hour tug across the Straight of Juan de Fuca provides both an opportunity to take in the splendor that is the west coast, and a chance to revel in the fact that you have volunteered to climb for an hour-forty-five at an average gradient of 6%. Too late to turn back now! 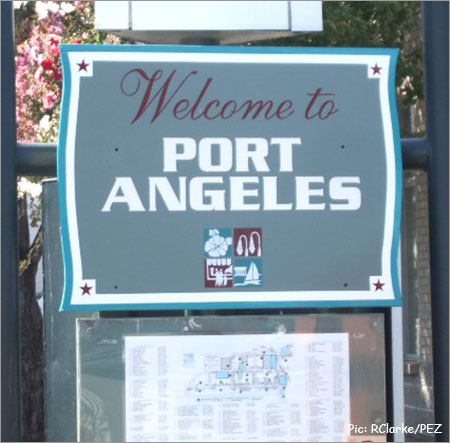 A seaside town is tops on my list for cycling destinations.

Off the ferry, we endure chuckles from the U.S. Boarder guards while waiting in line for customs. Apparently the frequent sight of brightly colored spandex is a novelty that’s hard to overcome, but we’re clean-shaven and packing current passports, so they let us through and we’re on our way. 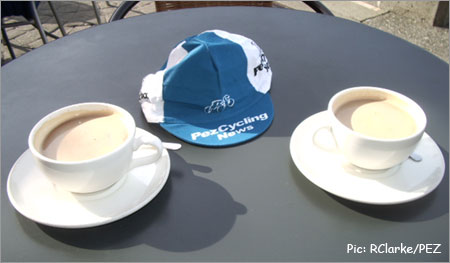 You can’t start an engine without appropriate fuel.

On paper, the climb starts at the Ranger Station, about 20 minutes out of town. But in reality you’re ascending as soon as you set foot outside the ferry terminal. It’s not an easy slog either, especially after the obligatory cafй stop in town. But if you ever want an honest taste for a locale, stop for an espresso and drink it all in. 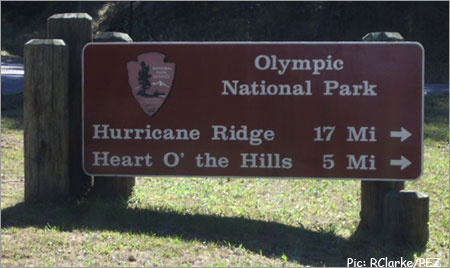 We reach the “official” start, and the road kicks up to 8%. While it’s fair to say that 8% isn’t all that difficult, especially with end of season fitness, this 8% adds a little treat- you can never see where you’re going. Like a rolling hamster wheel, the climb lulls you into a submission over the first 4km as you snake your way over what feels like an eternal half-moon road. 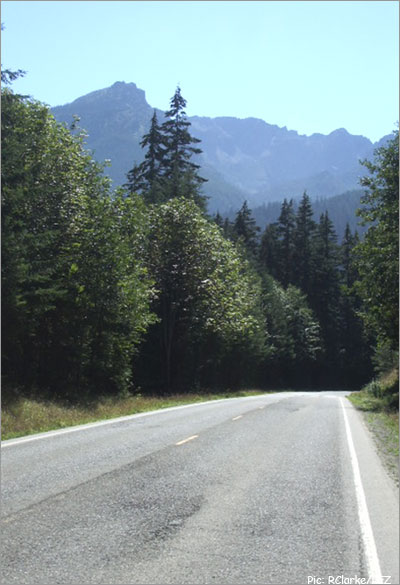 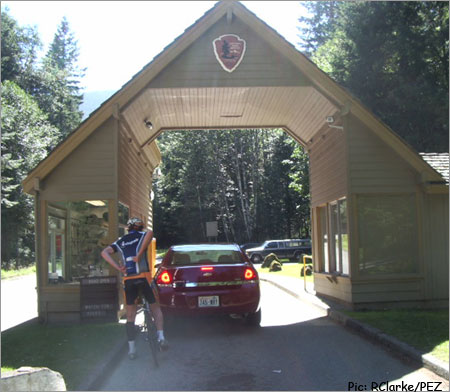 There’s no running this tollbooth!

At long last the road levels and we see a beacon amidst the evergreens. What looked from afar to be a hut from Hansel & Gretel turns out to be a tollbooth. Hurricane Ridge sits in a National Park, and cyclists are subject to fees just like motorists. A $5 isn’t such a bad deal though, especially if it accompanies some wisdom imparted by an old fashioned Forest Ranger a la “Smokey the Bear” uniform and all. With a wink and a weathered smile Ranger Roger sizes us up and says, “Good luck fellers, you’re going to need it…” I took it as the calm before the storm. 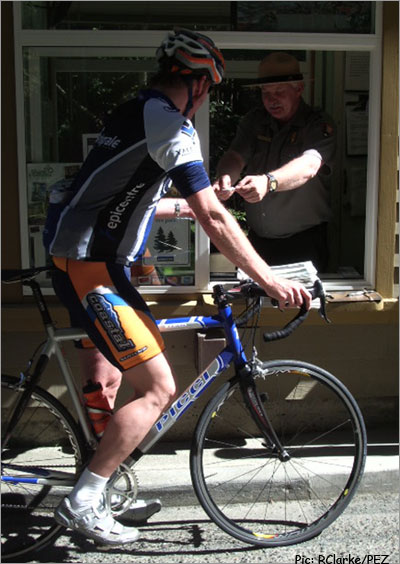 As the road resumes its siren song of scenic false flat, you get into a rhythm. Having taken off my speedometer and left the heart-rate monitor at home, I’m actually taking in the sights and sounds of my surroundings. The periphery sparkles into clear view and you realize that there is far to more climbing than the pain and suffering we are all so accustomed to. 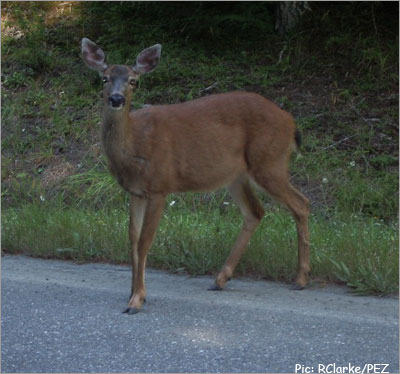 Bambi came out for moral support. 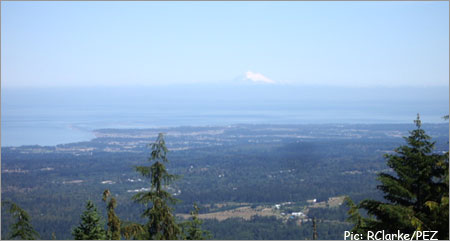 Our treetop canopy fades, making way for jagged mountain views. Pine and Cedar are slowly replaced with exposed rock. Road signs that mark the ascent indicate that, much to our chagrin, we are not the first cyclists to attempt this summit. Details such as these usually go unnoticed when you’re searing the steak of your legs to break that personal best time. And for once, I find that I’m smiling as I climb. 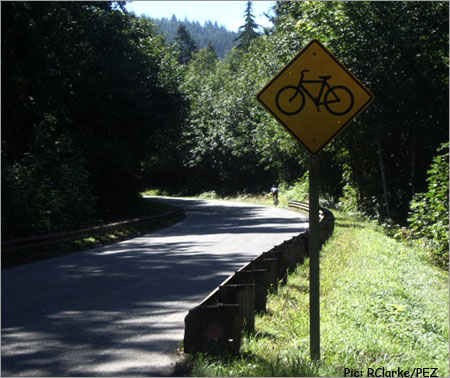 Apparently they were expecting us. 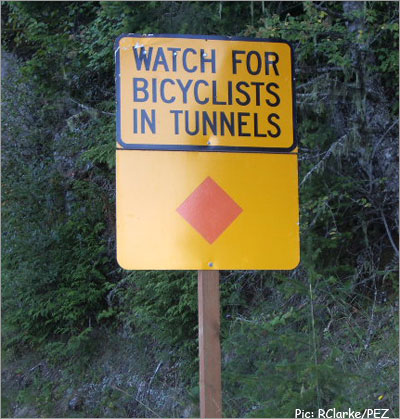 Due to heavy winter snowfall this route is also well known for its landslides, which is evident by the hillside scarring. The road is pockmarked where rocks have come smashing down. Not surprisingly, our speed increases through these patches. 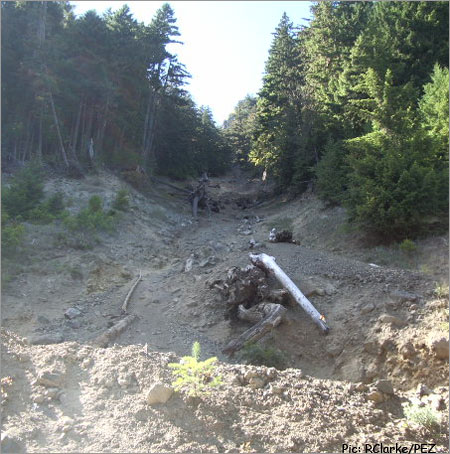 When Mother Nature has her way, you get out of the way!

Like the hairline of an aging pro-turned-director-sportif, the tree line continues to recede. Two massive switchbacks encompass a wide valley of steep cliffs and fallen trees. 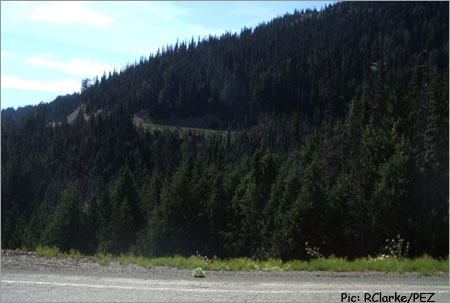 As the climb levels, I cheat a look at the altimeter on my wrist watch- 4800ft. I have no clue how long we’ve been riding for, but to gain that much elevation and not notice it is impressive; Not for our snail pace, but for the simple fact that the gradient allows you can maintain a friendly chat and still make progress. 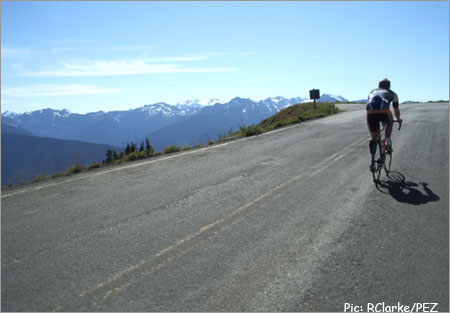 Both trees and air thin out near the top.

At long last, we round a corner and are greeted with a chorus of snow-capped peaks that would make the most scenic postcards blush. Amidst lunar-like rock and exposed alpine winds, I am reminded of what Mount Ventoux would look like. One final kilometer and we’re there.

Framing the view is our final destination, the visitor centre. As we roll through the parking lot, the cheshire grins we faced at the bottom are traded for looks of awe and amazement. “Yes, we just rode to the top”, I proudly think to myself as a family of not-so-cyclists stare in unison. 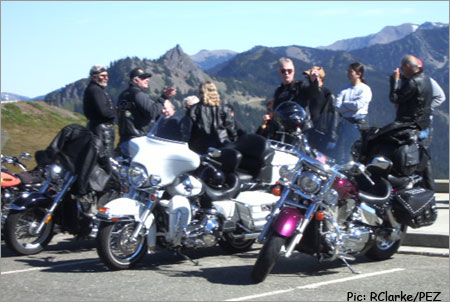 Not everyone on two wheels struggles with the climb. 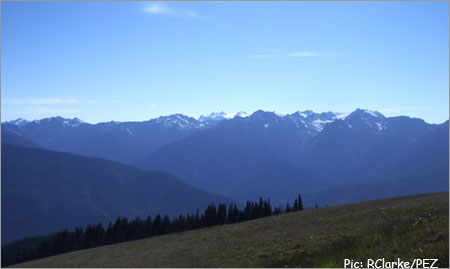 The Olympic Mountains- a worthy prize for almost 2 hrs of climbing.

Dismounting and taking in the assembly of hill and dale, you breathe in the mountain air. It’s a feeling of exhilaration and accomplishment you can’t put into words. As I crack a well-deserved Coke I wonder why more people don’t ride and challenge themselves to squeeze more potential from their bodies.

Then again, looking down at my pink spandex kit, I realize we are indeed crazy and it’s probably just the altitude talking.

What goes up must eventually come down, and down we did. Fast. Like a bat out of hell, you can hold 70 km/hr for about 45 minutes. That’s right- 45 minutes of descending.

If the view at the top isn’t a good enough reason for you to climb, then the trip back down certainly is.