Pez-Fan Bret Dunbar turns a ‘work’ trip in Europe into an ultimate 2 day escape as he catches the Giro one day and then goes and climbs the ‘Rodney Dangerfield’ of Italian climbs, the Gran Sasso the next. I get no respect, I tell ya!

Words and pictures by Bret Dunbar

In a continent of phenomenal riding, with beautiful rides steeped in cycling history, Gran Sasso stands alone. Gran Sasso? Never heard of it. It is not the Tourmalet, L’Alpe d’Huez, Arenberg forest, Muur-Kapelmurr, the Dolomites from the Giro or the Pyrйnйes from the Vuelta but after riding it on a beautiful Sunday in May I felt like I just had to share the experience with my fellow Pez fans.

I was in London for business the second week in May, so I figured I could bolt some fun on the front, in terms of a quick weekend in Italy to see the Giro ‘d Italia, do a little riding and eat some good food. What a crazy world we live in – “A quick weekend in Italy” are you kidding me? The modern world may have some drawbacks, but jet travel and the internet’s ability to connect cyclists are major pluses. 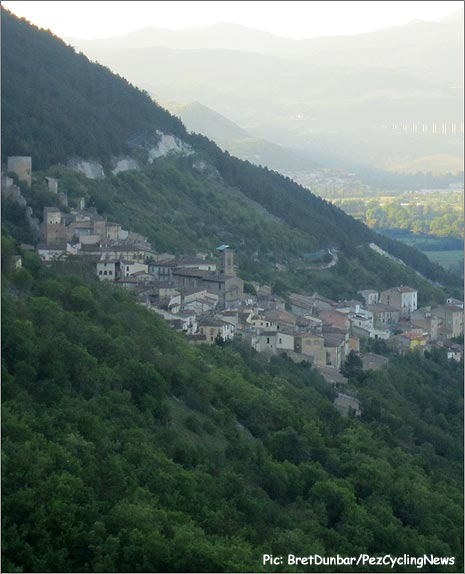 Who wouldn’t make a special long weekend out of a business trip with views like this to enjoy from your bike?

I contacted the Pez team – any suggested rides near Rome? Ale replied “You cannot miss the climb to Gran Sasso… from Fonte Cerreto you go up, up and up till Campo Imperatorre. The climb is not so steep, a little downhill in the middle with a kick at the end. Marco Pantani won the stage and the pink jersey here in 1999 with an attack in the last 3K.” I decided I needed more detail, so looked to Google maps (coordinates: 42.442667,13.558792) to map out the course. I figured it has to be a decent size mountain as it has skiing stations and the road builders in the region built a tunnel through the mountain rather than over it. Anyway, by my Texas Gulf Coast standards it would be steep (and cold). I should have thought a bit more about “Pantani won… with an attack in the last 3k.”

Pantani doing what he did best, winning solo in the mountains.

Before I headed out to tackle the Gran Sasso and do my best Pantani impression though I had a Giro stage to go and watch! Stage 7 of the great race awaited me so I picked up my rental bike from Top Bike Rental in Rome and rode most of the Rocca di Cambio climb, picking a spot about 10K to go near a friendly Belgium couple with a camper and a TV. The Giro is the perfect size – there are fans with campers with the race on the TV and the crowds are small enough that you actually get a spot in the crowd gathered at the camper door to watch the stage finish. 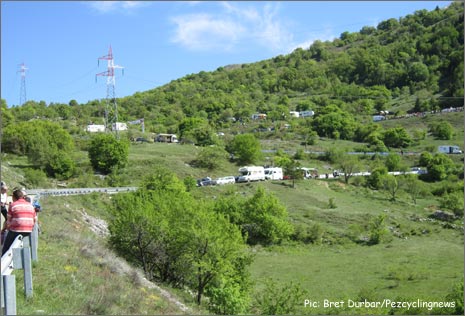 Friendly campers with TVs, beautiful mountains, Goldilocks number of fans (enough for excitement but still room to breathe)and great weather. Who could ask for more?

It is official now – I think Pink is a cool color. Which is good since I couldn’t stop buying cheap stuff from the vans trolling the route hawking Giro memorabilia. Did I really need an XXL cheap pink Giro t-shirt? And what size is an Italian XXL? But, at that moment, I had to have it. 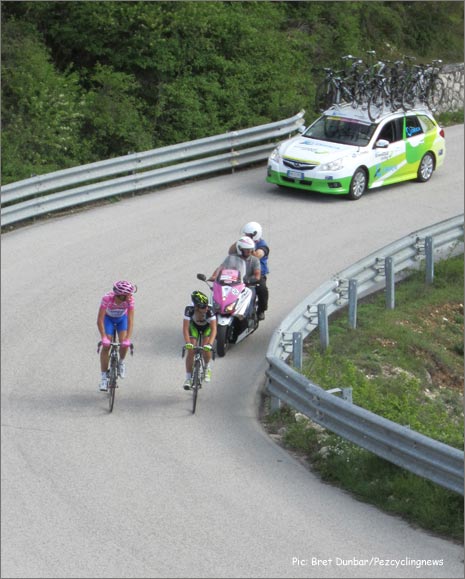 Adriano Malori modelling his very own Italian pink shirt during stage 7 as he gets dropped and left behind up the Rocca di Cambio pass.

After the stage I coasted back down the hill to stay at Monastero di Santo Spirito, some place built in 1222. That’s not a typo – almost 800 years old. This ain’t Texas. It was just silly in its perfection. It was situated halfway down the valley wall, looking over a movie-beautiful valley. The owners were great & the espresso was better than in Milan (gasp!). 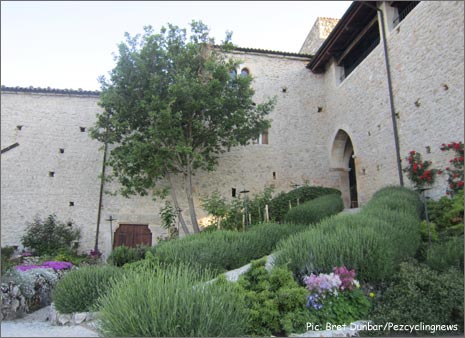 Our man Bret did this trip in style staying at the gorgeous Monastero di Santo Spirito – certainly beats a campervan.

Sunday was my big day riding on the Gran Sasso and I drove there via the typical Italian small roads to see the countryside, and wow it was nice. The highlight was squeezing the partial car (I mean European full-size rental) between a rock cliff and yet another ancient church. I think there has to be some major penalty (both on earth and beyond) for crashing into a church.

Arriving in the town at the base of the climb, Fonte Cerreto, about lunch time, I thought a healthy, energy efficient lunch might be the way to go before my ride……. 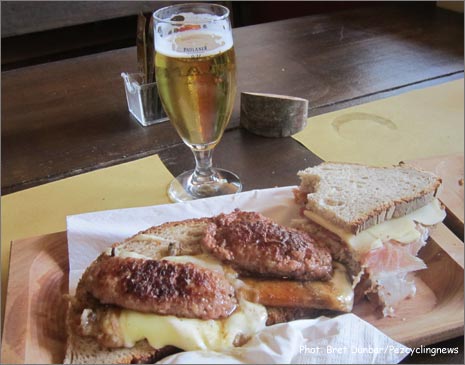 Hhmm, looks good. Not sure what Allen Lim would make of it as a pre ride meal though?

With the afternoon temperature in the low 70’s (low 20’s Celsius), the sun shining and puffy white clouds dotting the sky it was time to get on the bike. The ride after lunch started with a manageable uphill drag through a forest (I was in the smallest gear to conserve myself and digest lunch – not for any fitness related reason). 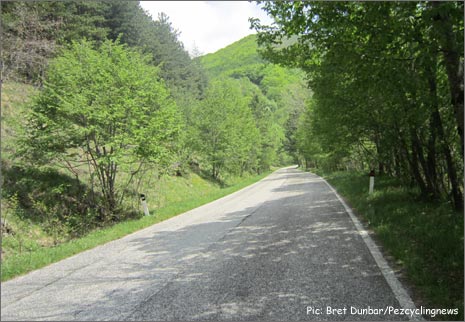 The start of the Gran Sasso – reasonable grade, sheltered, warm – and deceiving.

After a bit the trees dropped away, and the vistas opened up. I kept checking – yep, that is the lowest gear. My open-mouthed breathing was offensively loud, but the altitude forced me to ride moderately, which is good. I guess I was passed by about 10 cars, and one group of motorcycles. The rental bike had no cycle computer, no heart rate monitor and the lack of external feedback was exhilarating, it felt similar to going into a completely dark room – the rest of your senses become hyper sensitive to compensate. 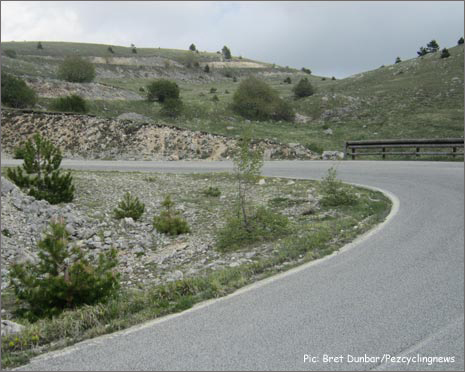 Phase one ended with a Zippy, big chainring/small cog descent which included the sweetest fruit of all – I caught and passed a car that had recently passed me. 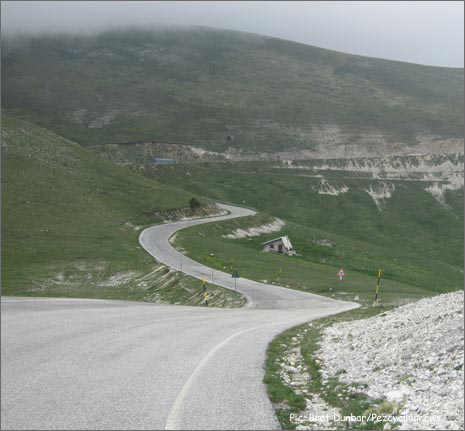 Downhills embedded in climbs are fun – on the way up at least!

Then came a soul-sapping false flat. My victory over the car was short lived, and they motored past as soon as the descent ended. The valley looked flat, but I was only one or two cogs from the easiest gearing… and my breathing was even louder, and I was starting to feel the cumulative effort. While stopped to put on arm warmers, I noticed that it had changed from fluffy white clouds to grey skies, and there was a menacing cloud front on the right side of the valley.

I was starting to get nervous – How much farther? Where am I? Will it snow? And how come I haven’t seen a car in 30 minutes? (or maybe only 15 minutes, time is funny when you are nervous and jet lagged).

I went up a little climb, and found a sign that said Campo Imperatore, 3 KM. The next sign said 10%. The road had missed the first cloud by going to the left. But the little climb took me right up into the clouds. No way I was turning around now – why would a father of two young kids, alone on a bike in a foreign land not ride straight into fog with a visibility of 15 feet? Note to self: When an Italian tells you a ride has a ‘little kick’ and you know Pantani won a stage here, you are in for a treat.

The lack of visibility is shocking. Since I can’t see, I don’t know how fast or how hard I am going – but at least I know I am getting close to the top. The snowdrifts are on the side of the road, and in the mist I see the wind blow over the top of the snow like a slow motion version of the contrails that form around airplane wings during takeoff and landing, or the pictures of a wind tunnel. 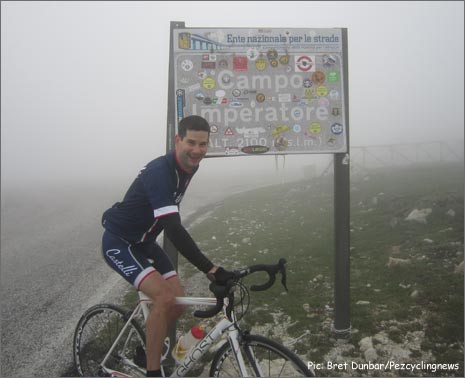 By the time our hero made it for the obligatory sign shot, the weather had really closed in.

All I can hear now is my own breathing as I struggle for breath at 6,000 feet. I feel the icy mist sticking to my face. My oxygen starved brain starts to shut down… watch the side of the road… keep the pedals turning over… breathe in-out-in-out. The effort and the altitude closes my world down to a small tunnel, and my imagination picks up. I hear an imaginary noise behind me, and look over my shoulder, straining to see the car. But instead I see, in my minds eye, Pantani dancing past me, and the mist parts for this ghostly vision like silent crowds of fans.

Suddenly the road edge is gone. With my guide gone, I stop and stand over the bike, panting, straining to see. I gingerly walk forward, and laugh out loud as the hotel (old observatory) at the top of the mountain comes into view. I literally would have run into it if I had stopped 10 seconds later. 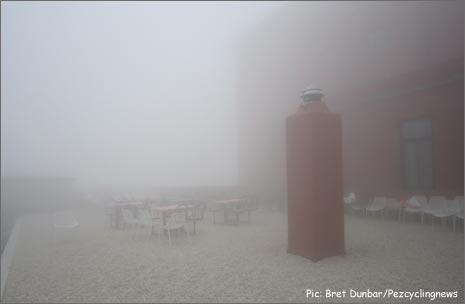 The ‘view’ from the top

After conquering the Gran Sasso it was now time for the ride down which was a mixture of feelings – cold, scared, thrill of the speed and where did this uphill come from?

It was then with sadness that I realised that a perfect day on the bike was over and that from this point forward it was drive, return car/bike, train, fly, car, hotel and then work.

Fortunately for me though before reality truly hit home I had time for one more good meal in Rome – and it was the tastiest meal of my life! It was at Il tempio di Iside, a place recommended by a friend who knows food. I don’t really know what I ate – but it was amazing. 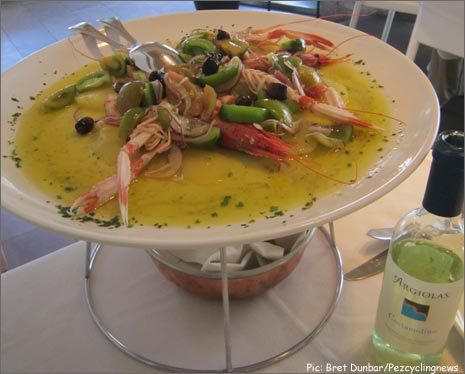 Not sure exactly what it was, but who cares – it was great!

The reason I don’t know what I had is they didn’t speak English in the restaurant and I only speak English. I am willing to talk English louder to help them understand but for some strange reason that rarely works. Now I am a reasonably sophisticated seafood eater, growing up in New Orleans and living on the Gulf Coast. But, I learned about new flavors that day in Rome – the best oysters I have ever had, and the sweetest shrimp, all new and super tasty.

So now that I’m back in the real world and back at work in meetings, my mind wanders off… blah blah blah. My internal conversation went something like “Dude! I just got back from an awesome weekend of riding in Italy! I saw the Giro d’Italia!” My thoughts cause me to smile so broadly that the presenters think I am into what they are saying but my mind and heart are back in Italy riding the Gran Sasso with Pantani and co.