Paris, France – the city of love, the Eiffel Tower, le Louvre and… traffic jams. Could Paris really be a destination for a PEZ ‘Top Ride’? Well, yes as just 35km South-West of the capital is the gorgeous Vallée de Chevreuse where the cows, sheep and forest replace the hustle and bustle of the big city making it an ideal playground for cyclists. 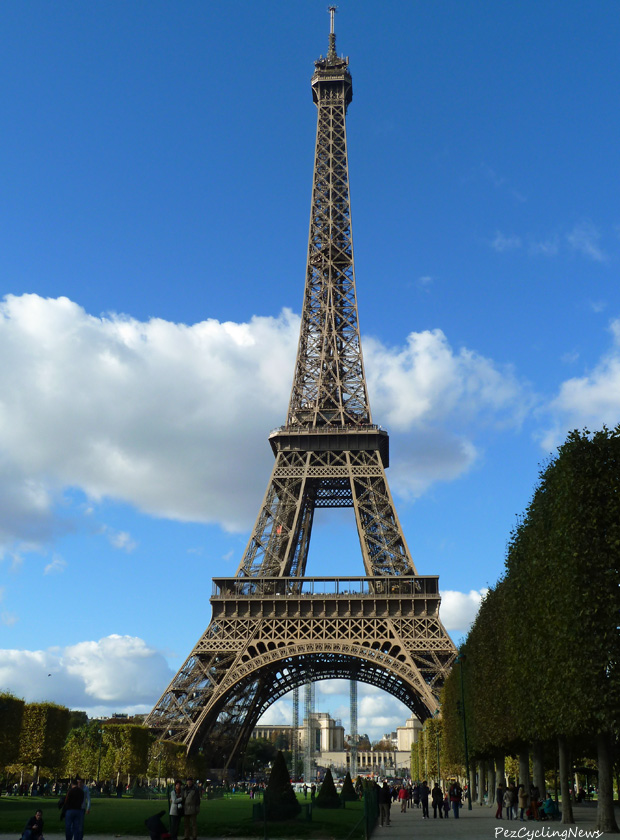 Visiting the Eiffel tower and all the sights that Paris has to offer is a must but if it’s real bike riding you’re after then you have to leave the city.

Having lived and worked in Paris I’ve come to accept the realities of this beautiful city. To live there as a cyclist is somewhat difficult with the constant traffic and generally unfriendly drivers, but just beyond the city limits are some notable escapes for the road cyclist, like the Vallée de Chevreuse, just 35km south west of the city. 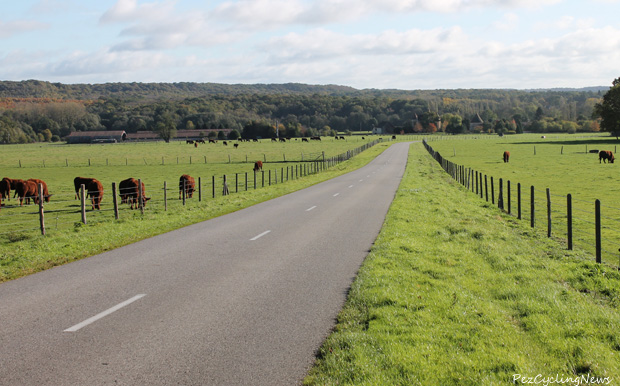 It’s hard to believe that just a short train, car or even ride away from the center of Paris you could be riding in this perfect country setting.

My start to this Top Ride was in the town of Montigny le Bretonneux, an outer lying suburb of Paris like many others surrounded by highways, shopping centres, schools and parks but with two notable exceptions:
1) It’s the center of the French Cycling Federation with their head office and brand new velodrome almost (opened in Jan 2014) and 2) It’s the hometown of my mother-in-law.

Yep, I was once again staying with the in-laws and while their hospitality and baby-sitting skills are much appreciated, the key to a successful stay with them is to have an escape plan – enter my ‘Top Ride’ in Paris. It may have been a cold November long weekend that promised rain, fog and heavy winds but no matter – I was going out whatever the conditions on my bike that I keep in their garage for my visits. It’s an old beast of almost 10kg with front suspension and all, but it works well, is the right size and I don’t miss it when I’m back home with my normal bikes. When I’m visiting the in-laws though this bike that no one would normally look at twice becomes like gold to me and I love it dearly – it’s the perfect ‘Escapemobile’. 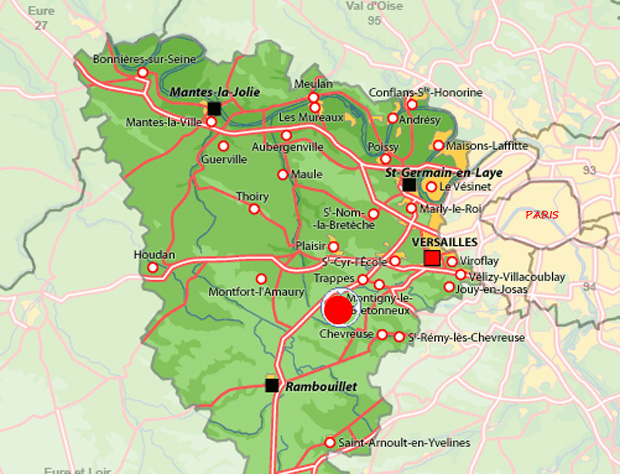 Not far from the city of Paris, the Vallée de Chevreuse (red circle) is THE place to ride in the capital.

Failing having inlaws to stay with in Montigny I can still recommend it as an excellent starting point to the ride as the train station just down the road (Gare de Saint Quentin des Yvelines) makes it easily accessible to Paris if you’re in town for work or a short holiday. If you’re lucky enough to have a car, drive to Le Mesnil-Saint Denis just another 8km from Montigny, park the car opposite the City Hall (Hotel de Ville) in the large, free car park on the D58, get the bike out and start riding as Mesnil is the true gateway to the gorgeous Chevreuese Valley. 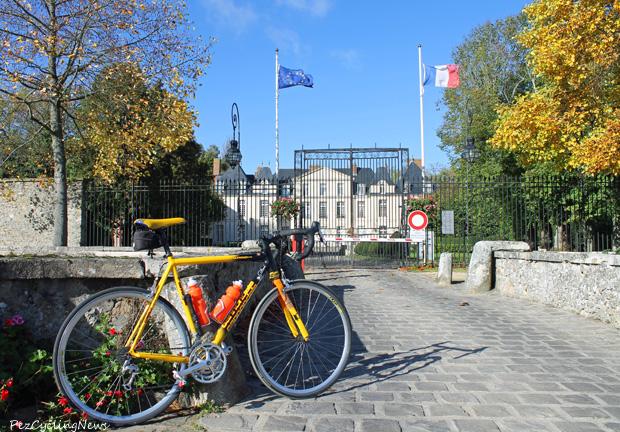 My 10kg Escapemobile in front of the City Hall in Le Mesnil-Saint-Denis ready for action.

From Mesnil the only way is down as you descend the D58, leaving the suburbs behind you and enter the forest that signals the start of the valley. For my ride in November the weather was cold, but thankfully sunny after 3 solid days of rain although the 60kph winds made the cold bite just that bit more, I didn’t care as I knew the beauty of the valley that awaited me. 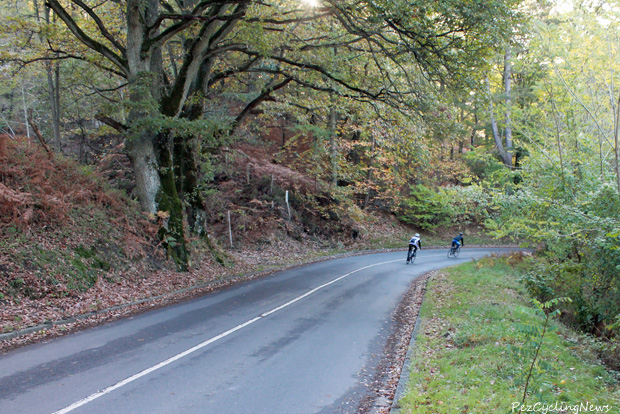 The first descent down the D58 from Mesnil. A quick 1.5km descent to start the day is always nice but you know what that means for the return!

The Chevreuse Valley or ‘Vallée de Chevreuse’ in French if you prefer is simply THE playground of choice for Parisien cyclists of all types. MTBer’s play in the forests whilst roadies like myself hit the valley in their hundreds – if not thousands on the weekends in large packs, small groups and soloists to experience the beautiful countryside full of castles, hunting manors and cute villages in a forest and farmland setting. I’ve previously been roadside for PEZ for the start of Paris Nice in this beautiful setting and having ridden quite extensively in the valley – albeit a couple of years ago – I set off with no real plan and no map, just an idea to follow my instinct and maybe join in with a group or two along the way.

After my descent and a couple of kilometers in the valley the first stop on my unplanned itinerary was the beautiful town of Dampierre-en-Yvelines with its Chateau. 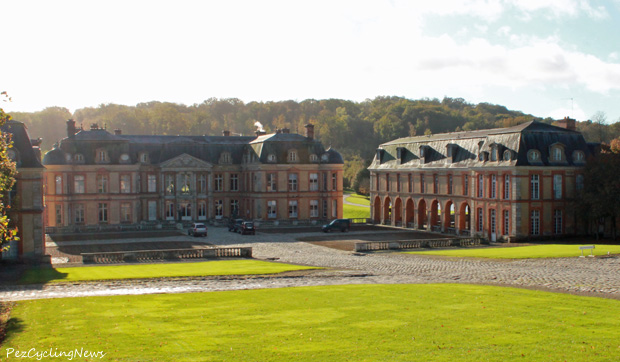 Being located so close to Paris and in an ideal setting of forest and rich farming land the Vallée de Chevreuse has a long and proud history with numerous chateaux and is today where the rich go to live – much like in the old days in fact. Previously the enormous houses that dot the valley were hunting lodges or holiday getaways for the elite, now they are permanent residences of CEOs and the like, who also enjoy the close proximity to the City of Lights. 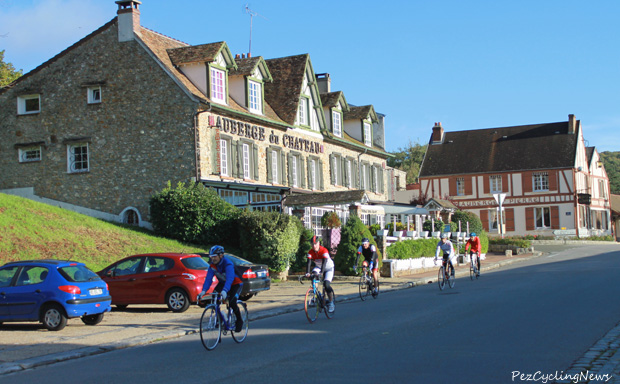 The main street in Dampierre-en-Yvelines.

Leaving the picturesque town of Dampierre behind I headed down the D91 and crossed over the dam to face my first difficulty of the day, a short climb of 1km with an average gradient of around 5%. 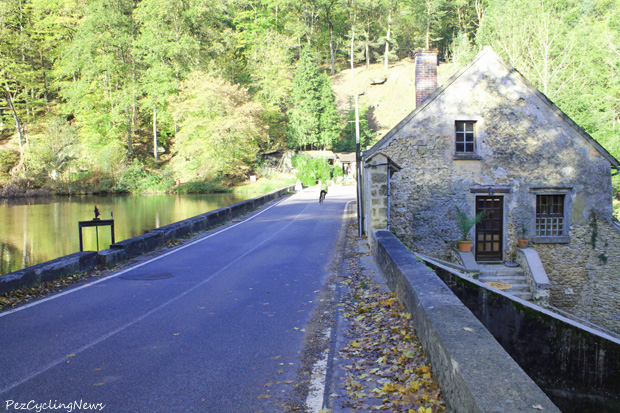 The climbs of this length and gradient are abundant in the valley and are just the right length to test yourself without killing yourself either. Various loops around the valley are possible from relatively flat to quite punishing but on this day I didn’t know how far I was riding, exactly where I was going nor how fast as I had no GPS, bike computer or heart rate monitor on my Escapemobile. I was riding, not racing, no Strava, no distractions just enjoying the sheer beauty of this region and the pleasure of riding a bike. 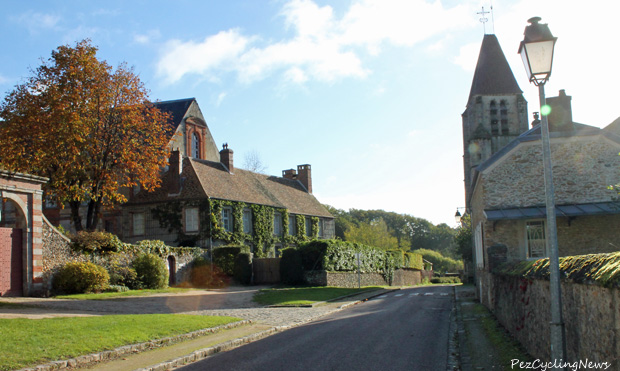 Around each corner was a new visual delight as I passed the small villages that occupy the valley and I was amazed at how everything was in excellent condition. What few houses are in the valley are perfectly kept, the villages are clean and immaculate and the roads are all in good repair. There were next to no potholes throughout the ride and this was a marked difference from my own poorer yet still truly beautiful region of the Herault Valley in the South of France. The rich that live here may all have expensive German 4x4s but they don’t want to actually have to use them on their roads! 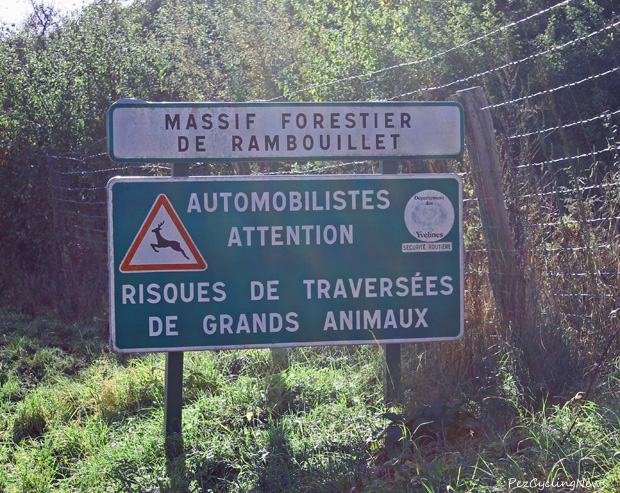 As I was making my way around my approximate circuit I regularly passed signs warning me of the possibility of large wild animals crossing but I saw none – perhaps they were all scared off by the abundance of middle aged men in lycra that dominated the countryside. Twenty kilometers in to the ride I’d been passed by less than 10 cars and yet I personally had already passed more than 30 cyclists alone (yes, even on my Escapemobile there were riders slower than me) and I’d seen easily another 60 or 70 going in the opposite direction. 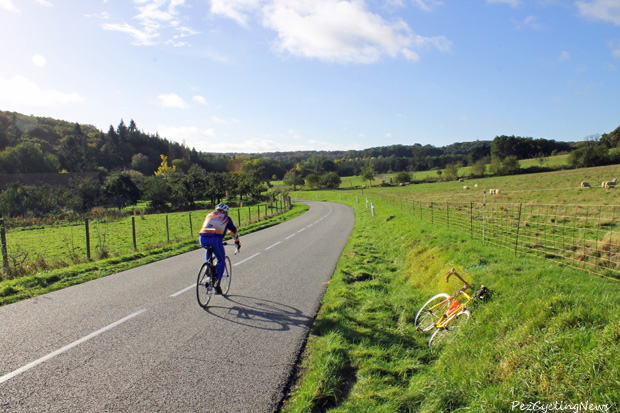 Apart from the cyclists my other company on the road was sheep, cows and horses as the farmers hang on to their land. 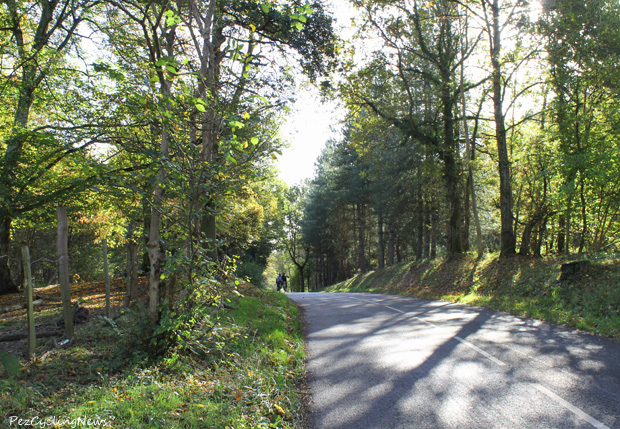 Between the small villages and farmland is the beautiful Rambouillet Forest which covers 200 square kilometers and was once the home of the Royal hunting grounds. 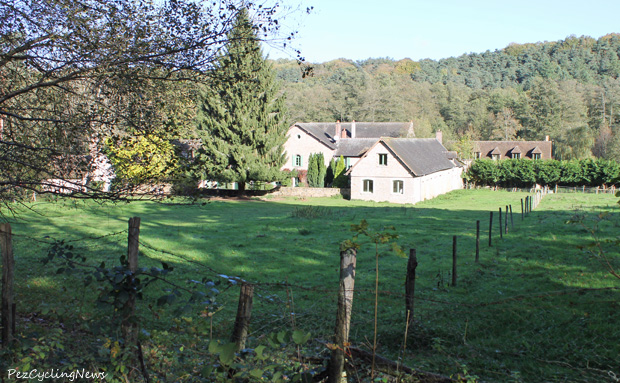 Between stretches of forests you get some nice large houses like this one. 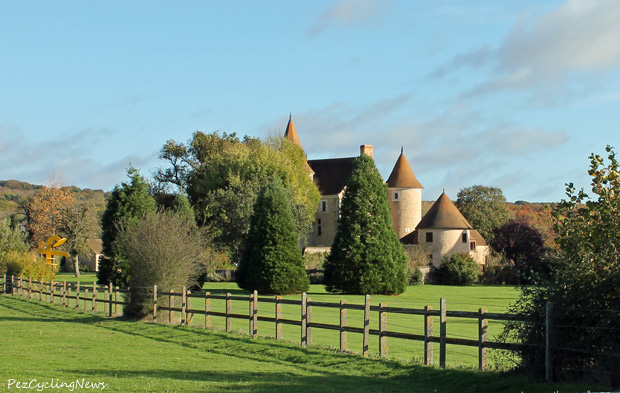 Or even bigger again like this privately owned Chateau at Les Carneaux. 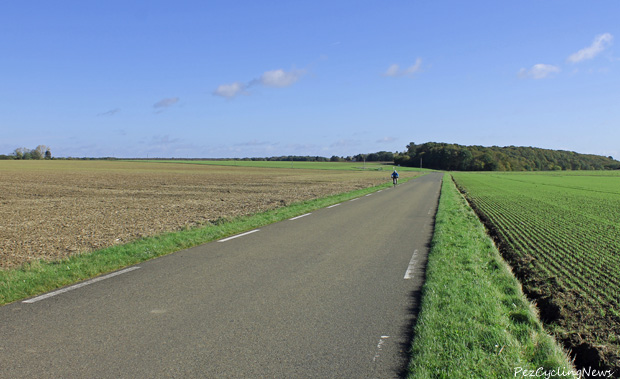 But the valley is a place of contrasts with large manors and chateaux around one corner and then nothing but open fields around another as farmers continue to work the fields as their ancestors did before them. Most of the valley is in fact a protected zone with various regualtions preventing new constructions and farmland not able to be sold off for housing – it must stay farmland. 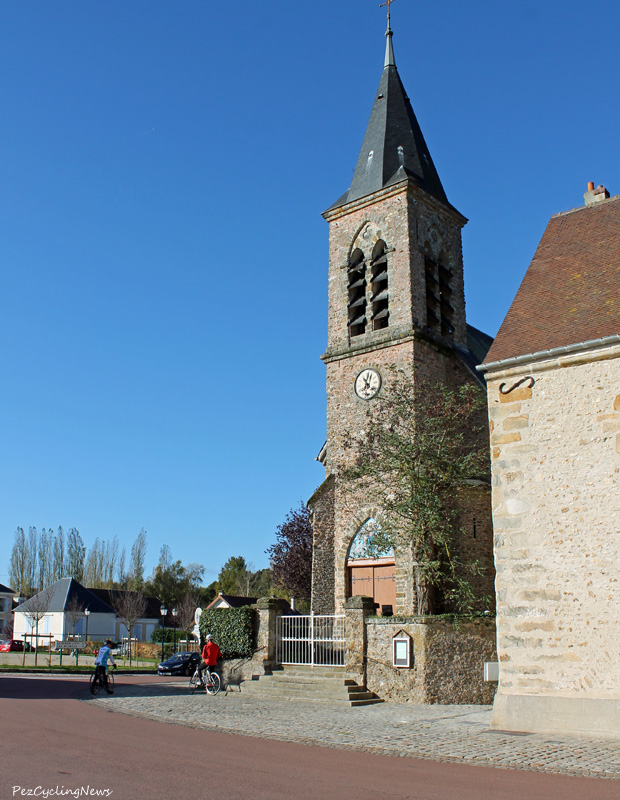 Beautiful historic villages, small hills, smooth roads and light on traffic, I didn’t need to step into church on this day as I’d found my religion. If you ever get the chance grab a bike, any bike and head to the Vallée de Chevreuse – you won’t be disappointed. 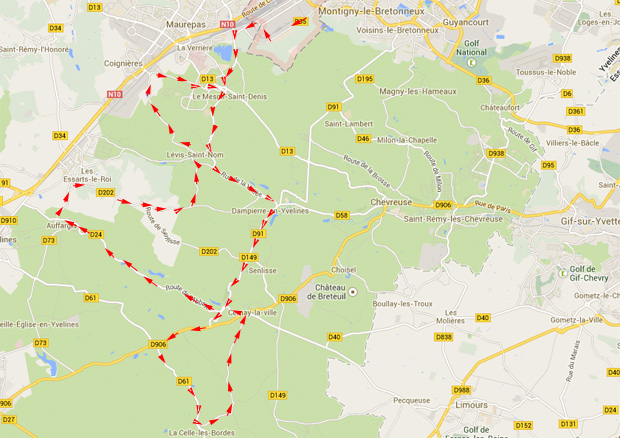 My circuit on this particular day. This is just one of numerous options that you could choose in the valley. Stick to the small roads and you can’t go wrong. This particular circuit was around the 50-60km mark and was a perfect outing on a cold November Sunday morning.