The Trentino region of Northern Italy is home to the brutally rugged Dolomiti climbs and one of our favorite places to ride. PEZ’s Corey Sar Fox is lucky enough to live in the South Tirolean city of Bolzano and took some time out back in 2008 to show us the beautiful Passo Mendola.

The Challenging Fact
Soon after I arrived in Bolzano about three years ago, a local sage told me, “if you want to see real cyclists (veri ciclisti), go up Passo Mendola.” This was merely stated as a fact, not a challenge. What did he mean by real cyclists? One of my first impressions of this northern region of Italy was that it was full of cyclists, usually riding very nice (expensive) bikes. I was literally moved (over) by groups of guys that looked like Bennati in fancy kits, talking loudly and taking up most of the road. Also, I marveled at the vast variety of old men; ones with pot bellies hanging out over their steel top tubes, lithe ones on sweet carbon bikes (Time seems to be a popular brand with many, maybe an inside joke?) and fragile ones riding old Colnago’s converted to flat bars. The other fascinating part was their regularity – no matter weekday nor weekend, so many could always be seen riding.

Of course, it was only natural that I had to see for myself these veri ciclisti on Passo Mendola. And ever since, it has become one of my most cherished routes. 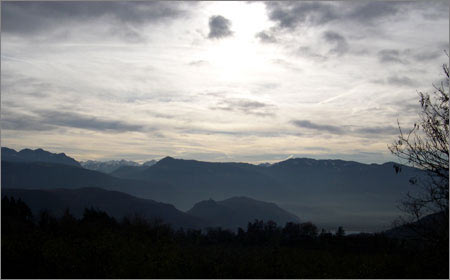 Undaunted by the dark and cloudy day.

Don’t get too discouraged by the next sign one kilometer later that states Passo Mendola 14.

These were my instructions for my first feature, and I was excited and eager to impress. The choice for a Top Ride is obvious. The day is partly cloudy and cold. It’s mid November here in South Tyrol or Alto Adige, to use the Italian name. This semi-autonomous region was part of Austria until the end of World War I. Accordingly, it has two official languages with German speakers making up 2/3’s of the population. However, thanks to Mussolini’s italianization efforts, the capital, Bolzano, has an inverse ratio of Italian to German speakers, namely 2/3’s Italian. For cyclists, the region is most famous for its Giro d’Italia featured climbs, like the Stelvio or Pordoi.

However, Passo Mendola has also had its own Giro limelight. It was traversed in the 1937 Merano – Gardone Riviera stage won by Gino Bartali. Or more recently in 2004, the 35 year old Pavel Tonkov won the 17th Stage that passed through. Amazingly 8 years after winning the Giro, the Russian dedicated the victory “to those who did not have faith in me.” 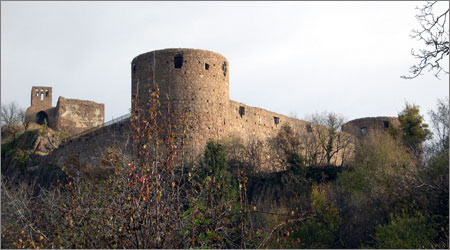 A Hesitant Start
Patches of blue sky leak through the clouds and lure me on. It’s pretty chilly, but hopefully the sun will come out and warm things up a bit. The first 5 kilometers leads quietly out of the city through bike lanes. The next 7 kilometers are an easy ascent to Cornaiano. I pass the Sigmundskron castle that’s been converted to the Messner Mountain Museum – a tribute to Reinhold Messner, the acclaimed Tyrolean mountain climber. It’s worth stopping for, but not today, we have our own climbing to do. 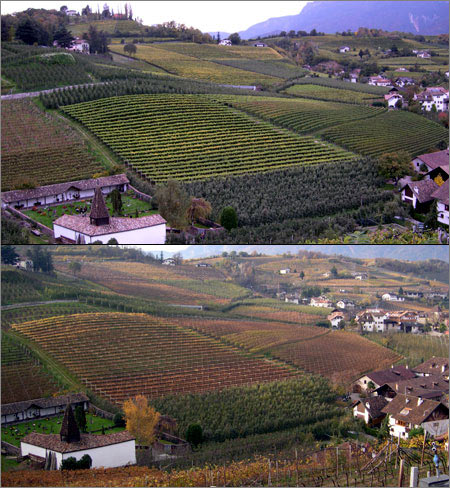 Up to Cornaiano – Before and After, Fall has arrived in the past few weeks. That’s a quaint, little cemetery on the bottom, left.

The Warmth of Philosophy
There are many reasons to ride. Everyone justifies their own passion (and time consumption) to themselves in one way or another. Our convictions are sometimes hard to articulate. Today, I look out over the railing and notice the colors are dull – rusts and yellows have replaced the greens in just the past two weeks. I can see one of my convictions: traveling by bicycle really connects one to the constant, yet subtle changes in nature. This is today’s Justification Philosophy. As I approach Appiano, I realize that I might need some more philosophy because an outdoor digital sign claims that the temperature is +2° Celsius. Bolzano sits around 200 meters above sea level, Appiano is about 400 and I’ve got another 1,000 to climb. The easiest choice is always to turn around and go back, but it is usually the least rewarding (that’s the justification I try to warm myself with).

[Mr. Pez: please, no more Top Ride’s ’til Spring for this transplanted Texan]

The Surprising Pass
The first few kilometers of Passo Mendola are mild and surprisingly gentle. The inclination is to fire up the rockets and take off, but it’s better to establish a nice, even pace. Why? The great thing about La Mendola is its elevation gain is pretty constant throughout. The road varies from 5.9 to 7.9% without any sharp spikes. Yet, it gets even better. The first 6 or so kilometers have 6 switchbacks to help one ease into a confident rhythm. The middle 4 km, shown in brown, have slightly steeper gains with some long, sweeping straights, but pays the rider back with majestic open views across the valley. Then just around the time one starts to notice that they’ve been climbing awhile, the road offers up another 9 switchbacks to the top. 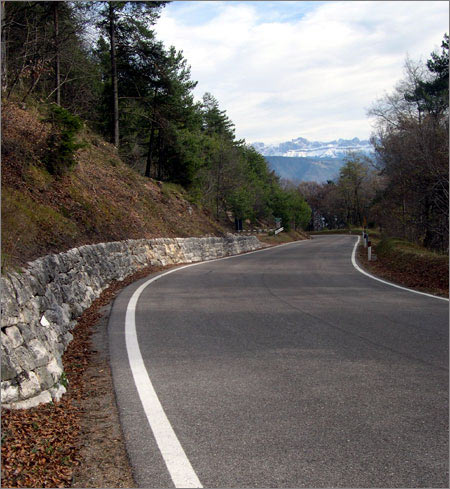 The Italian word for this kind of salita (climb) is pedalabile (peddle-able). This 14km 1,000 meter climb is the kind of ride that is just long enough and just high enough to feel like a good ride – not an epic one, but a good one. 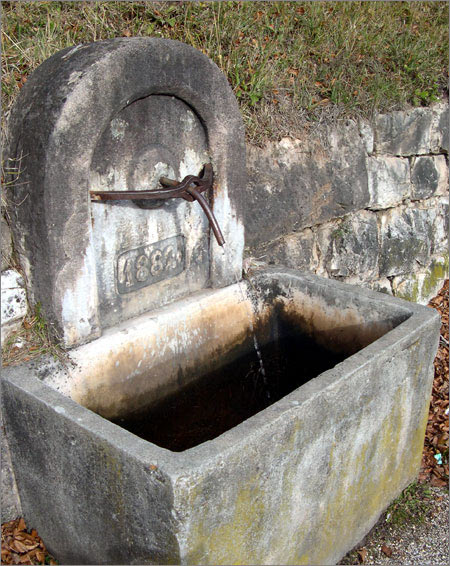 A fountain appears a little more than halfway up, which means that this is a one water bottle climb.

A Sunny Summit for Thought
I get to the summit and as if I had ordered it from above, the sun comes out – seriously, I have photographic proof. There is snow up here. I sit on a bench, eat my sandwich and think about the “real cyclists” seen up here. I’d unofficially report that the majority of riders are 40+ aged men without helmets on Italian, steel bikes. I’ve also seen a few on early carbon Trek’s. Pez’s Edmond Hood passed through the area last year while covering the Giro and spotted Gianni Motta. I’d classify the other ciclisti as a grab bag of randonneurs with loaded panniers, an odd and hardy few in street clothes on city bikes and some asphalt-bound mountain bikers. Maybe this is simply another example of Italy’s ‘bella figura’ complex, which means that appearances (apparire) are often more important than they should be. Or maybe this means something else… 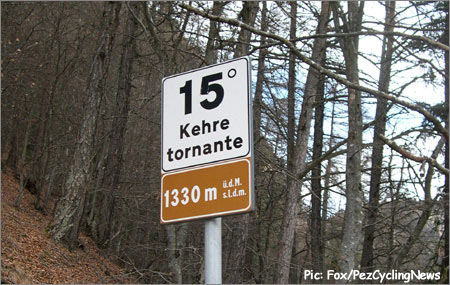 This is the last curve, the 15th switchback.

Yep.
In any case, the most surprising aspect of all is the quantity, or lack thereof: on any gorgeous Sunday in Summer, it is rare spotting more than 15 bikers on Passo Mendola. Hard to fathom that more riders wouldn’t take advantage of such accessible beauty? Yep. It’s not my aim to criticize, instead I’ll simply mark this as one more Top Ride advantage. Anyway, who wants to sift through traffic – avoiding the motorcyclists with “46” on their bikes and motorists that dream in Ferrari red are enough. 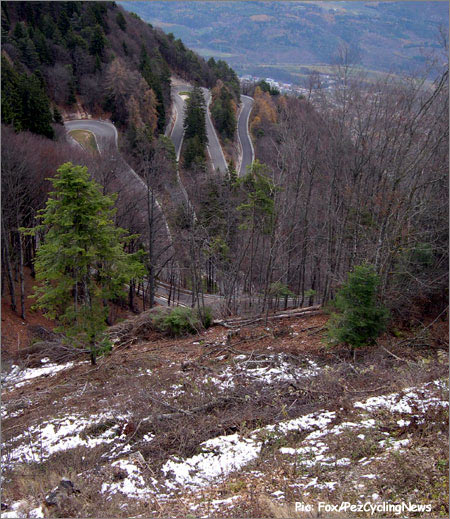 Switchbacks and some snow at the top.

Onward Home
From the summit of the Mendola it is possible to plot a course down the other side to Lago di Santa Giustina and curve back to Bolzano via Salurno [Large Trip]. Or one could descend back to Appiano but turn off towards Caldarno and wind around its attractive lake back to Bolzano via Ora [Medium Trip]. 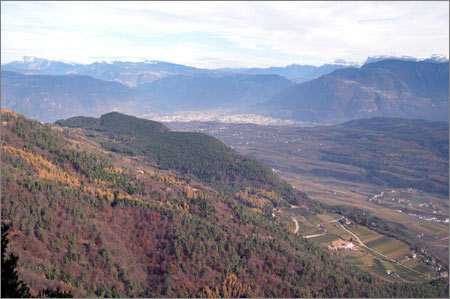 The panorama from the summit (with sun), Bolzano is way in the distance.

Or one could follow me back down to Appiano and home, with a little detour to show viewers a typical Tyrol-ish looking town, San Paolo [Small Trip]. Today’s ride is just 60 kilometers. That’s right, a Top Ride is also a training ride. 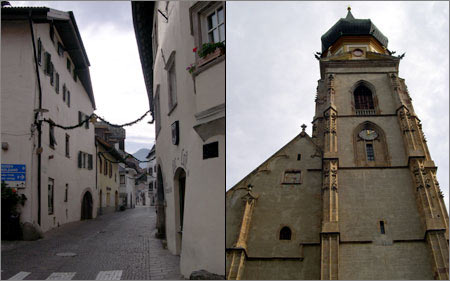 The detour through San Paolo.

As I’m de-thawing from the descent, I realize that I did not see one other cyclist. So at least for today, we alone should be called veri ciclisti. 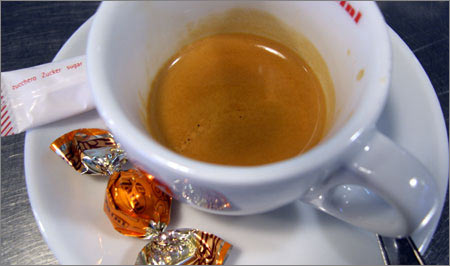 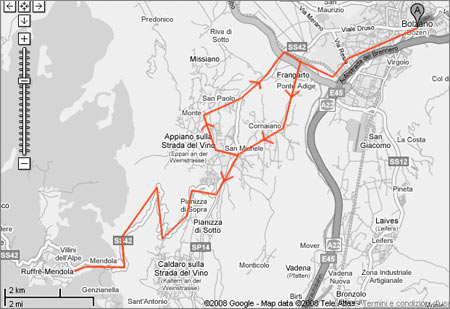 And of course the map!

Corey Sar Fox is a Yank living in Bolzano, Italy. He often cycles when not consulting or teaching brand strategy. Alarming Fact no.1: Fox doesn’t know how much his bike weighs.