It’s no secret we love offering our PEZspective on riding the pro race routes to see what they’re really like. But today our chapeau tips to PEZ-Fan Jim Brenneman, who flips us one better with his account of climbing the fabled Passo Gavia, AND getting an unexpected PEZzing on the way up…

To set the stage, I have been a cyclist for several decades and have also been a follower of the Grand Tours, primarily the Tour de France but also the Giro d’Italia. Formerly a racer, I now prefer fast day rides with my best cycling buddies. I have also been a daily PEZCycling News reader for the past four years or so. 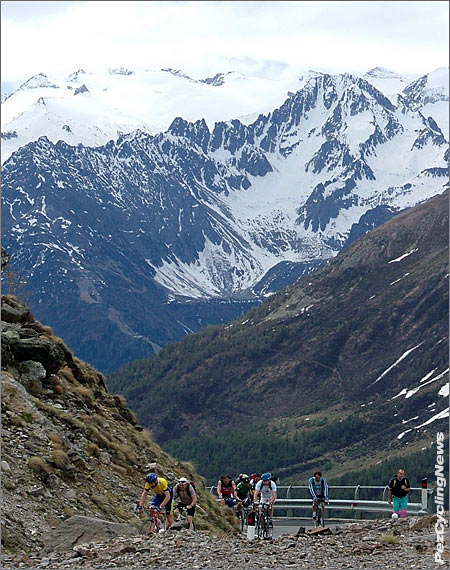 You know you’re a long way from home when you’re eye-to-eye with a glacier.

Most English-speaking cycling fans are keenly aware of American Andy Hampsten, of the fondly remembered American 7-11 team, having won the 1988 edition of this famous grand tour after taking the overall race lead during an epic, snow storm laden ride over Northern Italy’s Gavia Pass. That this stage played out on the Gavia, with its narrow roads, 16% grades and unlighted tunnel, adds to the lore surrounding Andy’s victory. (He told us all about it here.)

I will not attempt to detail the events of that stage, but it is well known among cycling tifosi as one of the most grueling stages ever in the Giro. I have always immensely enjoyed reading about this epic stage and dreamed of tackling this climb myself. That I later acquired a 1988 7-11 team jacket (that formerly belonged to cycling legend Bob Roll!) only added to the mystique of the 7-11 Team and Andy’s 1988 Giro victory which had its foundation on the Passo di Gavia.

Fast forward to late 2005 when my wife and I decided to try our hand (or legs, in this case) on a ride-along trip on either the 2006 Tour de France or the 2006 Giro d’Italia. Having looked at a number of different tour operators for each trip, plus our own goals and riding experiences, we decided upon the 2006 Giro and were thrilled to see that the tour that we selected provided the opportunity for us to ride the Gavia Pass from the Ponte di Legno base.

Jim sinks his teeth into the switchbacks.

During the pre-trip planning for the riding portion of our Giro trip, we decided to make summiting the Gavia Pass our major on-the-bike goal and we worked backwards from that stage to alternate a hard day with somewhat easier day, all in order to be able to complete a climb of the famous Gavia.

Of course, we live in the Midwest and cannot train on anything remotely similar to major mountain climbs in northern Italy. Our typical climb gains 300 feet and is less than a mile in length. For training we had to settle for 1.5-2 hour rides into strong spring headwinds before turning around and heading back home with the wind at our back. Would this be enough, we wondered, to take on the famous climbs of northern Italy? 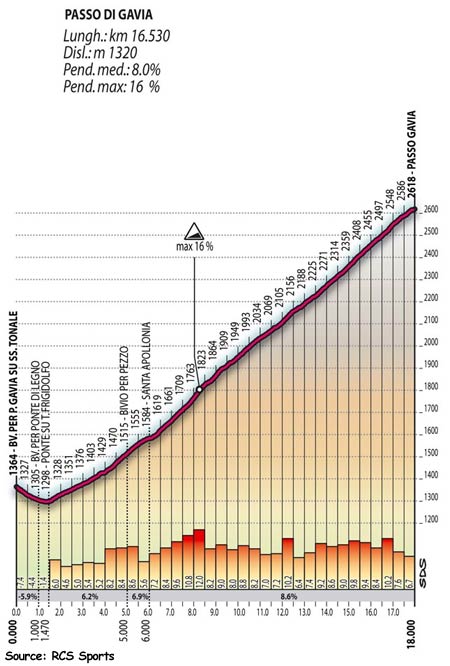 This profile fails to show the stiff, cold wind blowing down the mountain as you approach the summit.

From the starting point in Ponte di Legno at 1,258 meters, the climb is 17.4 km long with an average gradient of 7.8%. The summit is 2,621 meters, making the elevation gain 1,363 meters (over 4,000 feet!). One of the things that I have learned about cycling is that averages can be deceiving. In the case of the Gavia, the climb starts out easily enough on a fairly nice road and then, all of a sudden, after about 7 km, the road narrows down to a cart-path width and there is a 16% grade sign staring you in the face. While we were intellectually prepared for this, seeing that road and that sign right in front of you and not in some picture still makes the pulse quicken a bit. 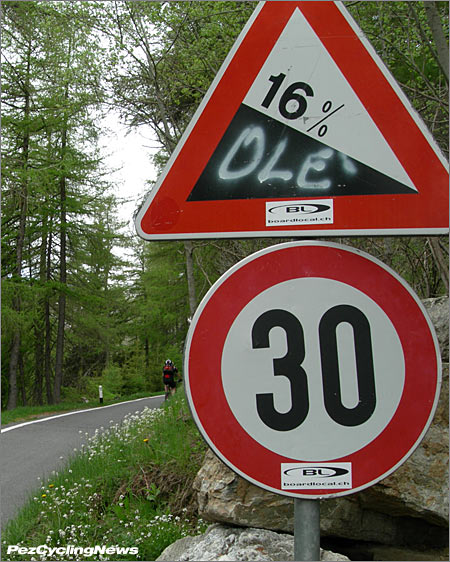 The numerous switchbacks on the Gavia are quite tight and serve to steepen the grade. Even the standard technique of taking the long way around was challenging. And then throw in seemly every cyclist in Italy on his way to the top, or at least the upper slopes, to see the race pass through later in the day, plus numerous team vehicles (team busses were not allowed on this road) and walkers. The overall climb was quite chaotic in addition to steep!

Around 4 km from the top there is an unlighted tunnel, which on a gray overcast day was very dark inside. I was unprepared for this darkness and had not removed my sunglasses, so I had to stop, remove them, turn around and enter the tunnel again, this time providing a better opportunity for my eyes to adjust to the darkness of the tunnel. After exiting the tunnel, the landscape on the climb is pretty much above timber line and the snow was hard to miss! 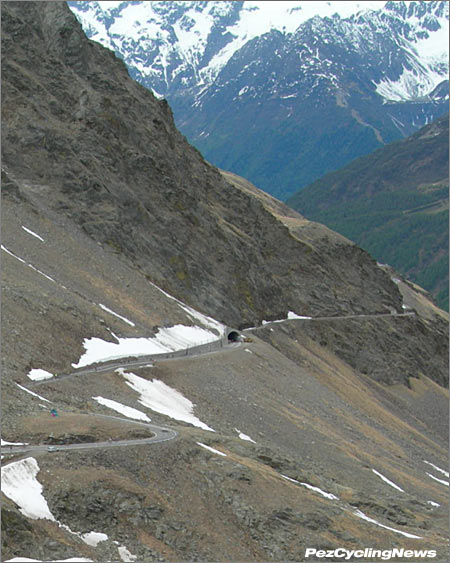 ”Hey Jim…!”
Around 3 km from the summit I was riding along trying to stay aerobic when I heard an unfamiliar voice ask me, in English, “How are things going, Jim?” I responded that I was OK and immediately assumed that the questioner was someone from my tour group since I do not have many friends in Italy. When I turned to my left to see who from my group was passing me and still had enough energy to talk, I was surprised to see a rider in full PEZCycling News kit. I did not recognize this person, but still he seemed to know me.

Thar she blows… only a few hundred meters left.

Then, it hit me: I was wearing an American Tour of the Scioto River Valley (TOSRV) jersey, which identified me as an English speaking American, and my name was on a sticker on the top tube of my bike. Coming up slowly to pass, he first identified me as English-speaking and then observed my name.

Then it hit me again. I looked at him and asked: “Are you Richard?”

That’s right; I was riding the Gavia Pass with none other than Richard Pestes, the PEZ himself. His voice told me that I was correct, that he was Richard and he would see me at the top. Between gasps for air at this altitude, I let him know that “Hey, I read you guys every day!” He was riding with his domestique Greg, also in full PEZ kit. I tried to get on their wheels but had to settle back to my own rhythm for the last couple of k’s.

When I got to the top and dismounted to take the obligatory photos, Richard and Greg were kind enough to pose for one with me to not only document my reaching the top of the Gavia but also getting PEZ’d on the way up. So this was the literal and figurative high point of my Italian cycling trip and it was also the Cima Coppi (high point of the Giro). And I got to share it with the PEZ! I don’t know what Richard’s statistics were for that climb, but it took me 1:36 for an average speed of only 6.7 mph! It sure seemed like I put out more effort than that! 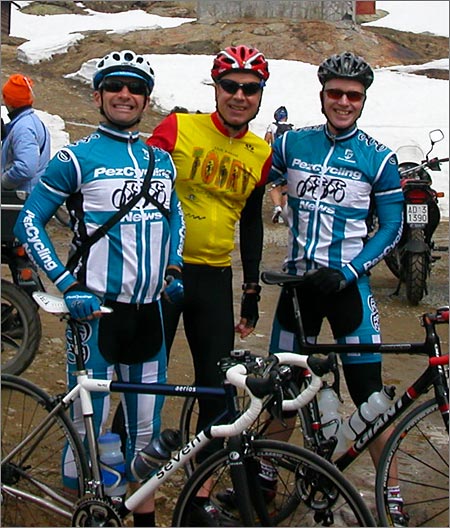 I had previously decided not to attempt the Gavia/Mortirolo double that day but, instead, to wait on my wife and then coast back down the Gavia, proceed further down the valley and then rejoin the Giro route for the long but not very steep climb to the stage finish at Aprica.

Richard told me that he and Greg were completing the rest of the stage, including the Mortirolo climb. Their day is well documented here. When I read Richard’s account, I was pleased to see that it had turned out so well but also a bit disappointed to see that their encounter with the American from the Midwest was not mentioned. Therefore, this story is written to correct that journalistic oversight!

If you go cycling in Italy, especially during the Giro, I hope you, too, have an opportunity to climb the Gavia Pass and maybe you, too, will get PEZ’d on the way up.

PEZ Sez: There’s no question this was one of my best days on the bike, and I do remember meeting Jim near the top of the Gavia. As I rode up behind him I suspected he was American, and when I saw his name on the bike there was no reason not to say hello. I was surprised by how many English-speakers I met on the Gavia that day, and no matter how bad you’re suffering, it never hurts as much when you can share the misery someone else. Thanks to Jim for the cool story – but next time you gotta go for the Gavia/ Mortirolo double- maybe this year?