Dedicated readers will know that our Toolbox Editor continued his globetrotting sabbatical with two months spent in Slovenia. Crammed into this little corner of Europe lies some of the greatest cycling to be found anywhere, and Stephen sends back this photo gallery of his stay…

Life as an academic is truly the greatest gig in town. What other job gives you a lifetime contract and pays you to NOT work every seventh year?! Following February and March spent in New Zealand, I grabbed a globe and found pretty much the exact opposite end of the earth, and spent May and June working with my M.Sc. advisor in Slovenia.

A Little Geography and History

Ljubljana, the capital, was perfectly situated in the middle of Slovenia, and everything from the Alps to the Adriatic was less than 2 h away

Now if you’re like most North Americans I talked to before my departure, you may never have heard of this young country. The northernmost republic of what used to be Yugoslavia, Slovenia was the first to declare independence in 1991 following Tito’s death, managing to extricate itself relatively easily with “only” a nine day war.

Being a small country and bordered by four distinct cultures (west = Italy, north = Austria, east = Hungary, and south = Croatia/Balkans), Slovenia was awash in a terrific mixing and merging of cultures, from languages to architecture to cuisine. In fact, you can almost run a GPS in your head and figure out exactly where you were in the country by looking for these cultural cues! 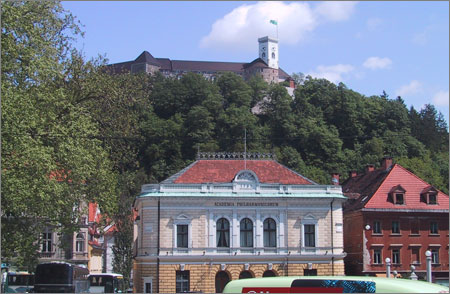 No European city is complete without a beautiful castle 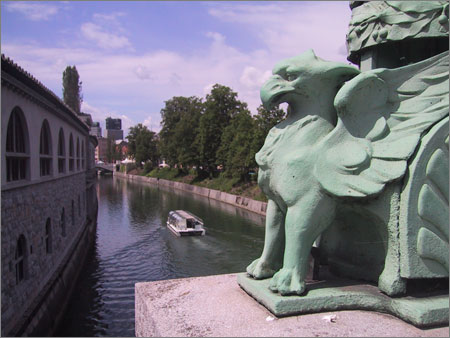 The view from Dragon Bridge in Ljubljana’s old city 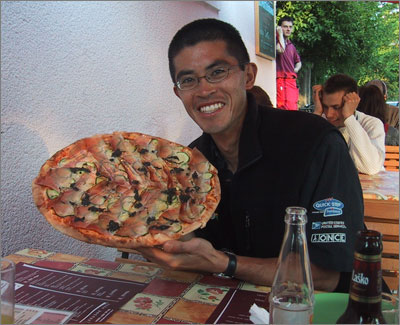 Mamma mia – pizza to make even my Italian pal Antonio weep with joy!

To say I was pleasantly surprised by Slovenia is an epic understatement. What I found was a country that was very European in outlook (just joined the EU in May 2004) and had all the amenities (e.g., great train system, fabulous cuisine) and charm (e.g., beautiful villages and churches, outdoor cafes) of Europe, while not being overwhelmed by development or touristic commercialism. 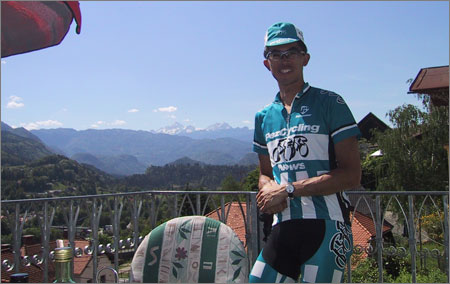 The terrific view from the patio of the Gostilna Augustin in the town of Radovlica. Great salmon risotto with the Alps behind!

Apart from the influence of Italy’s great pizza, coffee, and gelato, fine regional food can be found throughout the small villages. Indeed, most of the best restaurants in the country are small “gostilnas” in the villages and towns outside the capital of Ljubljana. As the different region feature their own specialties, it was an excellent incentive to ride far and wide! 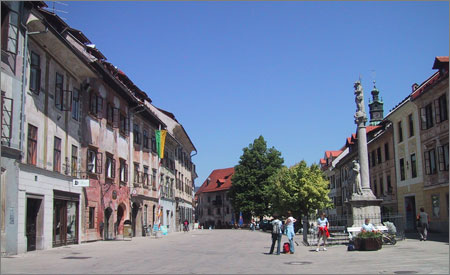 Villages dot the landscape of Slovenia, each featuring its own massive and scenic Catholic church, typically prominently placed at the highest nearby point. It was quite a blast to fly through the narrow village roads and squares pretending to be a Euro pro, with houses jutting right out onto the streets. The fact that villages were generally only 5-10 km apart meant that you didn’t have to pack for a big expedition every ride, as you’re always close to a cafй for coffee, cokes, sandwiches, or lunch. 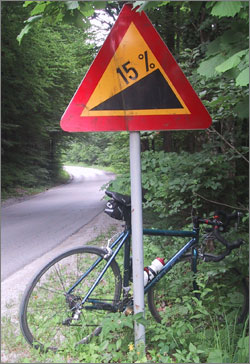 Ljubljana made a perfect base for cycling. The city is small (~300,000) and built in a flat plain, meaning that you can begin your ride in any direction depending on the wind and your mood. Whichever way you go, the mountains are about 20 km away, such that you can choose to build yourself a flat ride by circling the city. Then once you hit the hills, you have no end of gorgeous and well-paved 6-10 km climbs of 6-10% grades, although some sections pitch up to 15-18%. 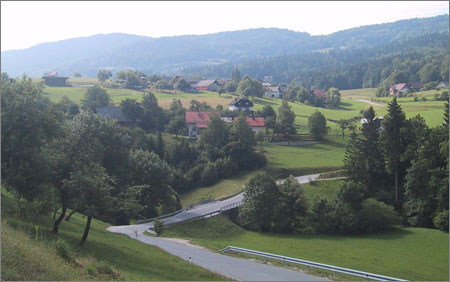 Paving is perfect but sporadic in Slovenia. For the most part, the roads are incredibly smooth and well-paved even in remote farm roads. But then, even on roads marked as fairly major on the maps, they would suddenly turn into hard-packed dirt road for 5 km or so without any warning, and then turn back to pristine pavement again! Ironically, despite the approximately 100 km of dirt roads I navigated, my two flats were on bike paths in the city! 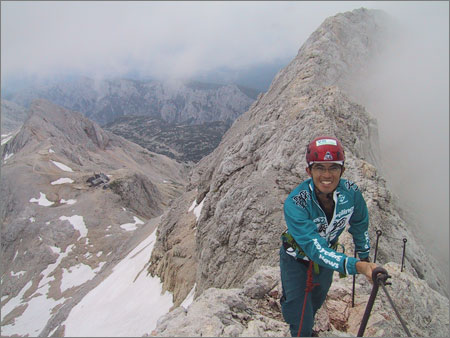 Smiling during the climb up, not aware of the initiation rite for first-time summiters of Triglav, consisting of 3 lashes on the butt with a climbing rope…

If Slovenians are passionate about one thing, it’s the mountains, and the country is home to some of the most renowned mountaineers in the world. I had the fortune to conduct a study on a group of these elite athletes. Therefore, for something different away from the bike, my pal and mountain rescue doc Jurij Gorjanc took me for a climb up Triglav, the highest peak in Slovenia at 2864 m. The 13 h slog involved 1800+ m of rock scrambling and roped climbing up and back down again, leading to the lab laughing at me hobbling like a geriatric from delayed onset muscle soreness for an entire week! 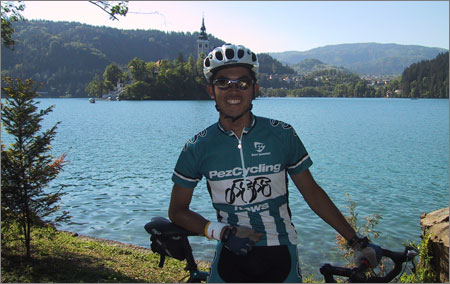 Tucked into the Alps bordering Austria is the postcard-perfect town of Bled, featuring a gorgeous lake with an imposing castle overlooking it high from a cliff. Here I am with the gorgeous church on an island in Lake Bled. Kinda obvious if you miss the last ferry for mass and have to swim over! 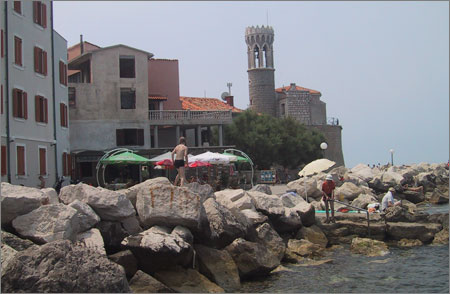 Yep, this is Slovenia too! A little bit of the Mediterranean life in the ancient walled town of Piran on the Adriatic. I’ll definitely be diving into these waters again, as we are planning a conference here for 2007.

If you ever get the chance, Slovenia is an absolute hidden gem of a place for terrific cycling and getting a full dose of the European experience and ambience. The people are terrific, the food is excellent, and the road cycling is sublime. Thanks to all of my new friends with the Jozef Stefan Institute and also the Tour of Slovenia for a wonderful time!

Stephen Cheung is an Associate Professor in kinesiology at Dalhousie University, and busy counting down the six years until his next sabbatical! Stephen’s company, Podium Performance, also provides elite sport science and training support to provincial and national-level athletes in a number of sports. He can be reached for comments or coaching inquiries at [email protected].
Like PEZ? Why not subscribe to our weekly newsletter to receive updates and reminders on what's cool in road cycling?