Fan enthusiasm, fan pride, fan support—there is momentum and power to be tapped, especially when it comes to cycling, a sport so accessible to young and old, professional and amateur. What better way to celebrate the cycling fan than to ride a GranFondo?

What better locale to Fondo than San Luis Obispo (SLO), California—home of Team HTC-High Road, world-class cycling roads and scenery, Tour of California host city 2006–2008, the city where you can wear shorts year-round, and drink lots of wine? Did I mention the chance to live out your pro-cyclist fantasies? 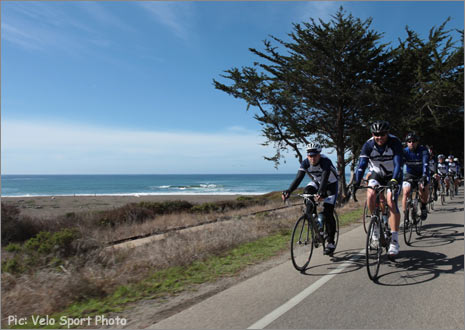 The Pacific Coast Highway makes for some mighty fine scenery – and riding. 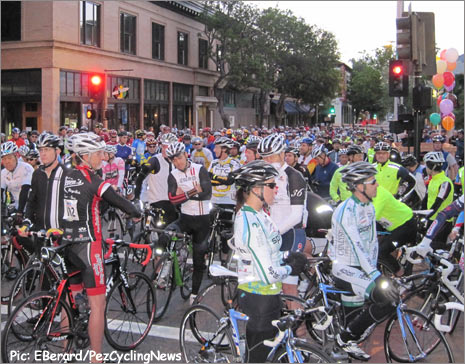 If you found yourself in San Luis Obispo on October 23, you were SLO lucky. The inaugural SLO GranFondo kicked off at 7 am under a Halloween moon in the historic 1772 Mission Plaza. Riders chose from three distances: Piccolo: 28 miles, Medio: 45 miles and Gran: 98 miles. 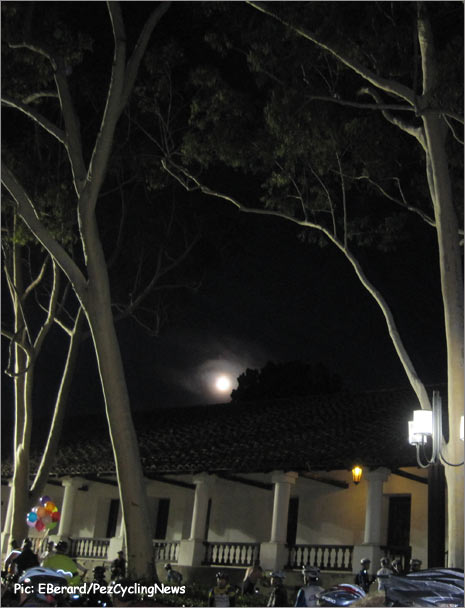 Trick or treat. Riders line-up under a Halloween moon.

Talk about tapping the power of local cycling fans… Organizers Team HTC-High Road and beneficiary ALPHA succeeded in motivating 650 riders, 2 chiweenies**, 200 volunteers, and over 25 sponsors, to get up before dawn and rally for a great local cause. ALPHA is a nonprofit pregnancy and parenting support center serving Central Coast families for 30 years. 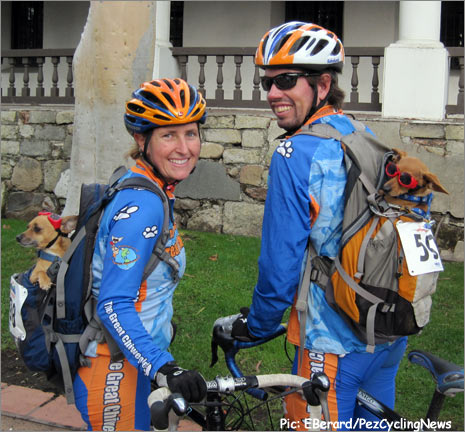 **PiccoloFondo finishers: Megan Cordes rides with Gu, known locally as The Great Chiweenie and star of a series of children’s books, and Cubby Cashen rides with Chomps.

Although almost 85 percent of riders, both pros and amateurs, came from outside of San Luis Obispo County, everyone I met shared a personal connection with SLO, even the Canadians. Some had previous Fondo experiences but most were newbies. Impressively, 70 percent chose the Gran 97.6 mile loop (with +3000 feet of climbing) from SLO to Hearst Castle in San Simeon, including HTC-High Road owner Bob Stapleton. And everyone I spoke with had been training a lot for the Big Ride. 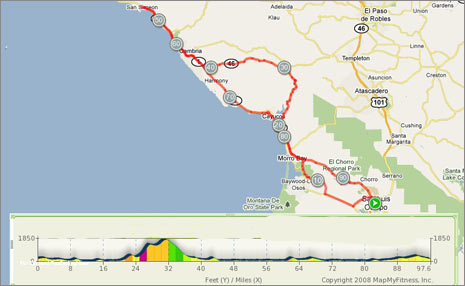 Fondo Fan Cameos
• Jane Fredman, originally from SLO, and her friend Beth Gouge arrived from Colorado Springs. “We’re hoping our high altitude training and lifestyle will help us!” they told me. Beth had done three other GranFondos, including one at the 2009 Sea Otter Classic as well as the Gran Fondo Colnago Piacenza in Italy. Her advice on the mass start strategy? “Stay upright and stay away from other people!”

• Lisa Mills of Shell Beach, CA, decided to do the MedioFondo after her employer, Paul Vanderheyden D.D.S., sponsored the event and started organizing an office team.

• Sporting a red Canada jersey was Leif Loberg from Bracebridge, Ontario, a first-timer to SLO, riding the MedioFondo with a friend who lived locally. This was his first GranFondo style event, but he says he’s planning on doing a lot more. 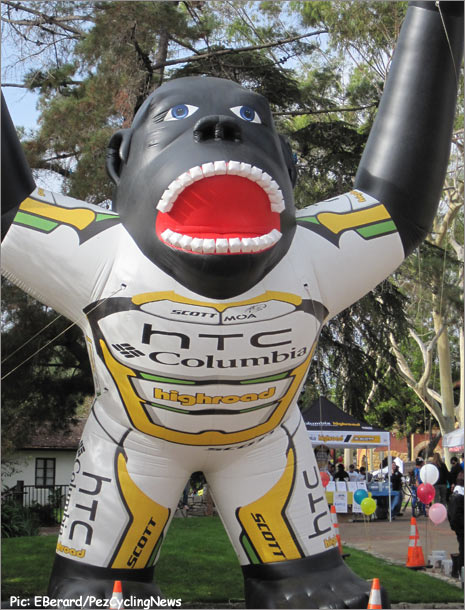 As seen in the Tour of California, just in time for Halloween.

• Lionel Senes of Arroyo Grande had done 17 centuries this year alone, but this was his first GranFondo. He was looking forward to being timed and to riding with Lucas Euser of Team Spidertech, a local Cal Poly alumnus!

I spoke with Lucas Euser who returned to these familiar roads for the first time since graduating from Cal Poly in 2007. About his Spidertech experience to date, he told me, “It’s great. I feel like an honorary Canadian.” Having been hit by a car two weeks ago, and in the midst of an off-season break, he opted for the MedioFondo. “I got to meet up with old friends and met some new Cal Poly kids, and people that live here who picked up a bike later in life. It’s fun to meet those types of people. That’s why cycling is great, it creates a community. We all instantly have something in common. It’s like Internet dating at its finest.” He’s looking forward to the growth of the SLO GranFondo and more pro participation. 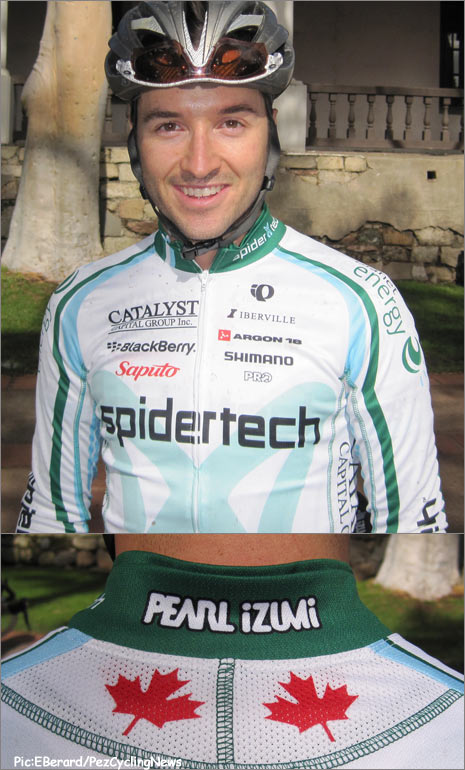 Local legend Team Spidertech’s Lucas Euser returned to the roads of his alma mater Cal Poly. “I feel like an honorary Canadian.”

HTC-High Road’s Ina-Yoko Teutenberg, current German Road Champion, calls SLO home during the off-season. Right at the beginning, Ina-Yoko could be seen lending a hand to a rider in distress with gear trouble. How is that for pro support?

This was a first GranFondo experience for US Time Trial Champion Evelyn Stevens. “I love this town, it has a college feel and fantastic riding. These type of cycling events always bring out really interesting, diverse people.” 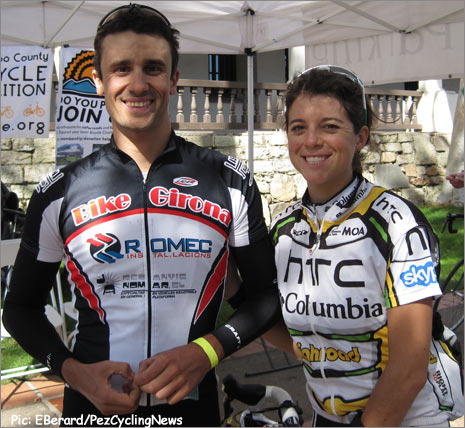 Scott Smith, co-owner of event sponsor Art’s Cyclery and GranFondo rider, talked about the impact of High Road being based locally. “HTC-High Road’s presence here has definitely given the core cyclists in the area pride that we have one of the few American teams in the country here in our small little town of SLO.” Also, Art’s enjoys an even greater partnership in that they host HighRoadSports.com web store and fulfillment. Better yet for his business, Art’s Cyclery is already a Specialized dealer. 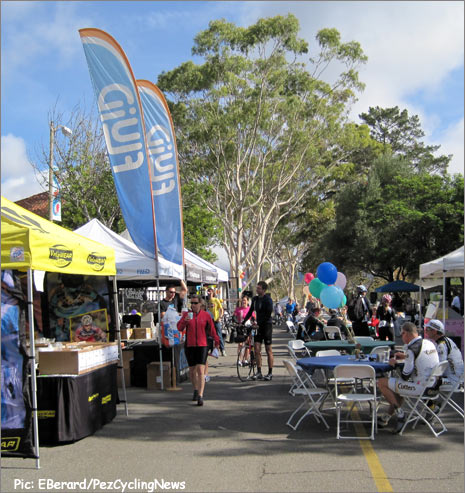 Team HTC-High Road also used the event as a local introduction to a few of its new stars of 2011 including Carla Swart, originally from South Africa, top 10 finisher at the 2010 World Championships; Danny Pate, U23 world title, stage wine Tour of Missouri, TTT wins at the Giro d’Italia and Tour of Georgia; and Amber Neben, former World Time Trial Champion and former US National Road Champion. 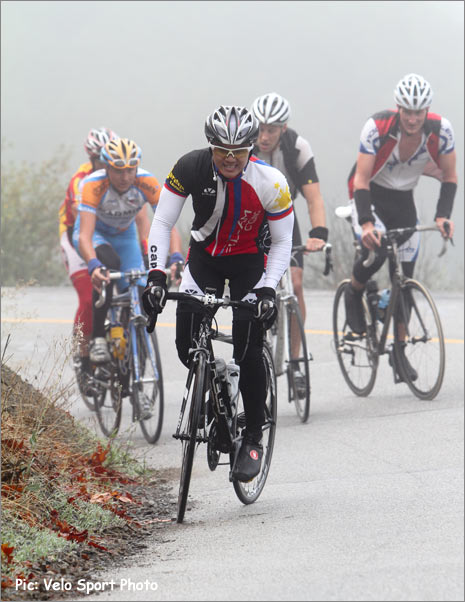 Local sponsor, Todd Ventura, who met the Stapletons through mutual friends, wanted to help out as much as ride. In addition to printing all the event collateral and heading up the marketing committee, he tweeted for the event. “I’ve been riding for three years. I wanted to be involved and this event supports a great charity. It’s fun hanging out and meeting the pro athletes and this is a great location in October, the hills are green, there’s a lot for everyone, and it can be as hard as you want it to be.” 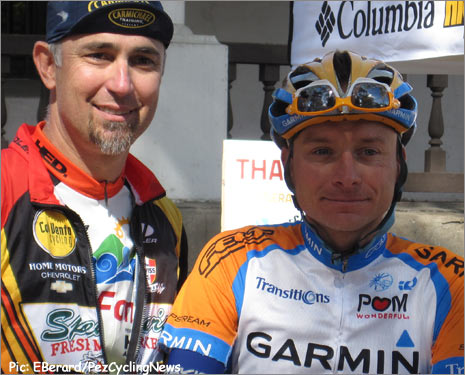 Coined “the new marathons of cycling,’’ GranFondos have arrived in North America…You can expect to see them in a major city near you in 2011. Even the major US cycling events like the Sea Otter Classic caught fondo fever and added the 35, 45 and 95 mile supported rides to their event schedule starting last year. Just for comparison, Italy boasts over 1000 Fondos.

Pez described the GranFondo target audience well in a recent preview of the RBC GranFondo Whistler, “Ideal for the competitive but ‘I don’t want to race’ type of rider.” Sound familiar? Find a GranFondo near you or mark your calendars to fondo SLO next October. By the way, the fastest time of the day was 4:45, so let the training begin!

WIN: Your Choice From POLAR!