The annual June tune-up for Le Grande Boucle is underway this week in France, and stage 6’s march through the Alps from Gap To Valloire looks like a broken saw-blade. The high point will be the 2067m Croix de Fer – a climb worth riding for any true fan – which is exactly what we did.

The French Alps have no respect for lines on a map. Shoving their way into France from the west ofItaly and Switzerland, the mountains dominate two of
France’s 26 rйgions, the Rhфne-Alpes and the Provence-Alpes-Cфte d’Azur, and more than half-a-dozen of the country’s 83 dйpartements (each rйgion has between 1 and 8 dйpartements). 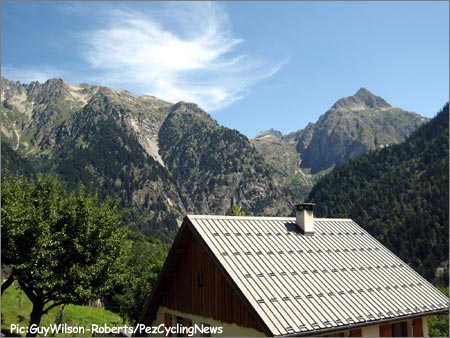 Beautiful scenery in the Alps.

Despite their apparent spread, though, the Alps are tightly clustered geographically. The main road from Grenoble (capital of the Isиre department) at the western edge to Brianзon (in the Hautes-Alpes department) in the east up against the Italian border is only a 100 kilometre drive.

This one major route, although it skips past the major ski fields at Les Trois Vallйes (including Courcheval) further north, cuts through the middle of most of the major mountain climbs that have featured in the Tour de France and the Critйrium du Dauphinй Libйrй. Take a left off the main road to head for the Col du Glandon, or drive further to Bourg d’Oisans at the foot of Alpe d’Huez. Further on is the right-hand turnoff for Les Deux Alpes, or stay heading upwards to the top of the Col du Lauteret at the foot of the mighty Col du Galibier. Staying the course to Brianзon puts one in the shadow of the Col d’Izoard.

Wild and isolated compared to most of the rest of France, the area features stunning and dramatic scenery – impossibly daunting with its mountain peaks
but, at least in the summer, lush and verdant with its green and colourful valleys and meadows. It is also steeped in cycling lore and every year is an opportunity for individual riders to add their names to the list of legends who have conquered the mountains here.

This year’s 59th edition of the Critйrium du Dauphinй Libйrй will again be showcase for this region and another chance for legends to be made.

The Alps stages of the race, as well as the Tour de France when it passes through, have typically been centered on either the Brianзon or Grenoble areas. Last year the race went over the Col d’Izoard into Brianзon from the south, before heading out the next day on stage 6 to La Touissuire almost identical to stage 16 of the Tour.

This year, the big mountains stage is again stage 6 but will take a less common route into the Alps. The 198-kilometre route from Gap to Valloire will be one of the most picturesque of the race, but it will be a tough mountain stage featuring the hors categorie Col de la Croix de Fer. With five other rated climbs, including the final categorie 1 Col du Tйlйgraphie, the riders will have little chance to enjoy the spectacular scenery that the route passes through.

Up and down, and down and up we go…

The stage departure town is Gap, the southern gateway to the Alps as well as the capital of the Hautes-Alpes department. Despite its small size, the town has been pivotal in French history, briefly hosting Napoleon’s return from exile in March 1815 on his way to re-take power in Paris before his defeat at Waterloo in June of that year.

Gap has featured cycling’s history books before, too, most recently as the dйpart for the Dauphinй’s stage 5 in 2004. The Tour has been a frequent visitor, and Gap hosted the finish of stage 14 last year (with a popular French win by Pierrick Fedrigo) and the start of the mammoth stage 15 to Alpe d’Huez after the rest day. It was also the finish for another epic stage in 2003, famous for Alexandre Vinokourov’s breakaway win and Lance Armstrong’s cross-country riding to avoid the brutal crash by Joseba Beloki.

The less-common route this year will see the riders first of all over the cat.2 Col Bayard and the cat.4 Cote du Motty before entering the Isиre department and
the Valbonnais area on their way to more difficult climbs. 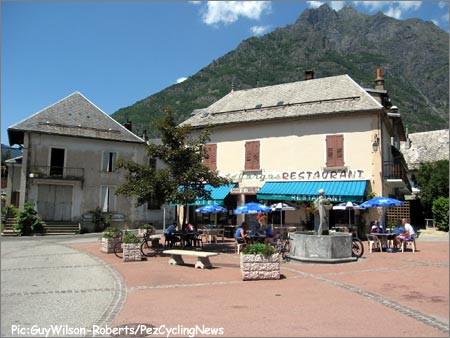 The Valbonnais area is a great spot to stop for lunch.

Next up, the cat.2 Col d’Ornon at 1,371 metres will give the peloton little trouble. The valley leading up to the summit is quite sheltered and while the road does twist and turn, the gradient is far from steep. There is a cafe at the summit, with a shaded outdoor seating area that race spectators will be able to enjoy.

The decent, however, is a little trickier and the road narrows in places with several tight hairpin bends hemmed in by the surrounding greenery. If there is a breakaway group, they might be able to gain a little extra time over the peloton reluctant to take risks too early in the stage. Attentiveness will certainly be required with the houses of several tiny villages, as is typical in the Alps, hard up against the side of the road. 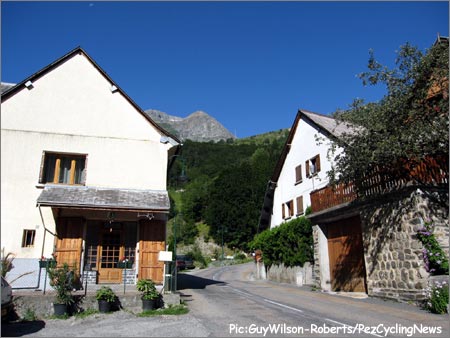 Looking back up the descent from the Col d’Ornon.

The next climb on the stage is the Col de la Croix de Fer, the Cross of Iron, which is the highest summit of this year’s race.

Despite lacking a secure place in cycling mythology, the Croix de Fer is one of the most scenic climbs in the region. At 2,067 metres, though, it is also one of
the toughest. It can be climbed from either the north or south and the former route has often been used as the climb prior to the long run into Bourg d’Oisans for the assault on l’Alpe d’Huez.

The southern route has also been historically popular, and last featured on stage 17 of the 2004 Tour. Last year’s stage 16 climbed the adjacent Col du Glandon from the north but turned onto the Croix de Fer for the final few kilometres where Michael Rasmussen was first over the summit and solidified his solo breakaway win.

This approach is definitely the scenic route, but it is far from gentle. Official statistics say that the northern slopes are the more difficult, with 30kms of
climbing at an average of 5.1%, pitching over 6-7% for the last 7km. The route from the south is, in comparison, around 27km at 4.7% on average. There are,
however, plenty of sections close to 10% and even a kilometre of 12% to negotiate halfway through the climb. 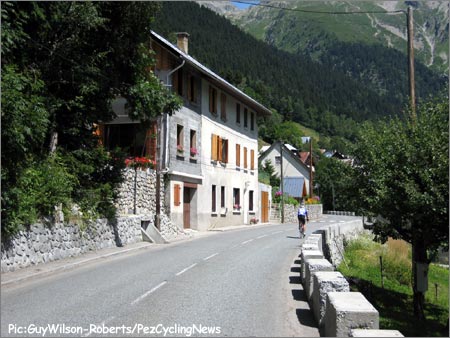 The gentle run up the valley will give the peloton the chance to rest their legs before the climb, as well as to grab supplies from the feedzone in the village of
Allemont (for spectators, the bakery opposite the camping ground is highly recommended and some pain au chocolats are essential if you plan to tackle the climb), and perhaps the opportunity to appreciate the views over the Lac de Verney reservoir before the road disappears into the tree line.

The mostly forested road is typically narrow like many of the roads in the region and is mostly a long, steady climb. The peloton should be little troubled with their 39×23 gearing, but any fans riding the climb would be well advised to have a compact (a 36×26 is an excellent choice) or a top gear of at least 37 inches. The only surprises are the short hairpin descent after the village of le Rivier de Allemont, and the steep section on the other side which pitches up at 12% (there are warning signs!) for around a kilometre.

There are also some steeper sections close to the Lac de Grand Maison, a few kilometres from the summit, with more spectacular alpine scenery on offer when the road leaves the forest behind and is winding up the craggy pasture mountainsides. 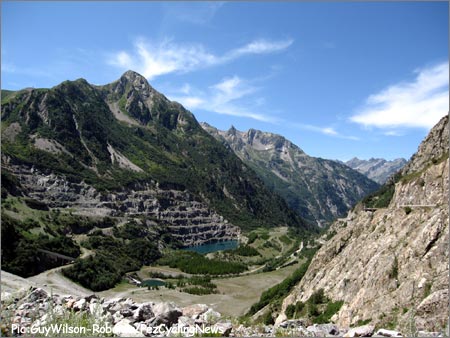 With 1 kilometre to go, there is the turn off to the left for the Col du Glandon, but the looming summit of the Croix de Fer beckons. The view here really is
breath-taking, extending back down the valley of the climb, with rocky peaks on either side, and the summit itself (with its rather diminutive cross of iron)
offers expansive views away east towards the Col du Galibier and north to Annecy. 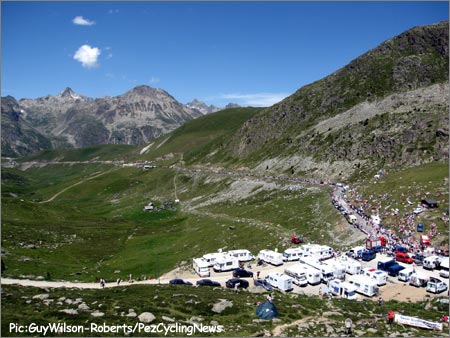 The final stretch to the summit at last year’s Tour.

With so far to the finish, it seems unlikely that the Croix de Fer will be decisive in this stage. From the summit there is the technical descent and three rated climbs over 60 kilometres still to go before the arrivйe in Valloire at the foot of the Galibier.

But it might play at least a small part another great exploit in the Alps. In the Dauphinй last year, the peloton was all together at the start of the Glandon ascent but Iban Mayo used the climb as a springboard for his eventual stage victory at La Touissuire, dropping Alejandro Valverde and holding off a hard-charging Christophe Moreau. Perhaps this year will see another decisive attack. 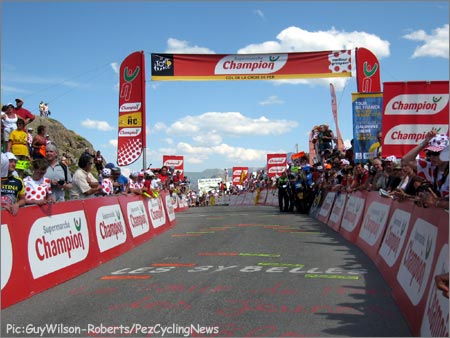 For cycling fans riding in the Alps, though, the Croix de Fer is a fantastic climb. It might not have the prestige of Alpe d’Huez, the dramatic final kilometres of the Col du Galibier, or the storied history of Courcheval, but it is a worthy challenge and the summit vistas are well worth the effort.

And if you time your ride right, as this author did during the Tour last year, you might even see a few legends in the making. 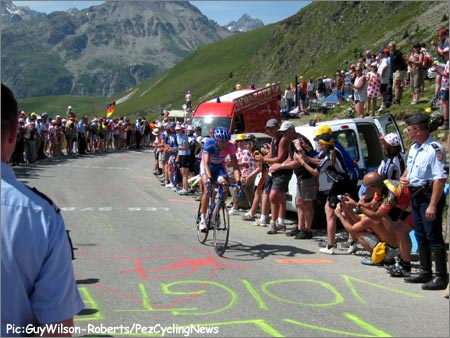 Will the Cross of Iron define another cycling legend? We’ll know on Saturday.

Simoni Talks: From Then To Now