Rob Panzera of Cycling Camp San Diego reports back from a little known but very worthy sportif ride on the Flиche Wallonne parcours, the day before the Spring classic pro race. With almost no hype and even less attitude, this little known secret is worth a closer look.

One low-key event on the European sportif calendar is the Farniente Classic, which roughly covers part of the La Flиche Wallonne parcours, Mur de Huy included. It’s run on the Tuesday before the main event for the Pros on Wednesday. 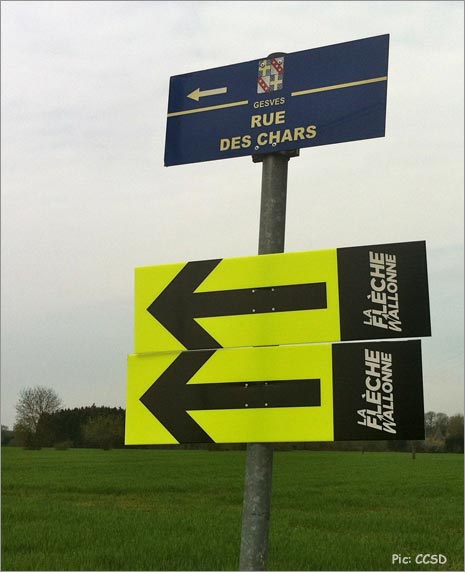 Where sometimes it can be hard to put into words what makes cycling in Belgium a magical experience for a cycling fanatic—Is it the history? The legendary courses and climbs? The small towns and tasty culinary delights? The people? This event really brings home all that draws us to this country, this cycling mecca. 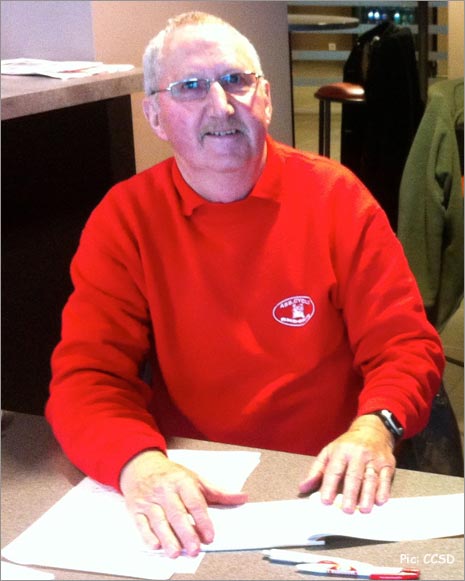 “We do not do this for the money. We do this because we want the participants to have fun, have something nice to eat, and finish with a smile,” said the event director who is also the President of the Federation Francophone Belge du Cyclotourism et du VTT (FFBC). This is the mood of the whole event. Afterall “Farniente” translates roughly to an informal way of saying “idleness” or “leisure.” It is also the title sponsor in the form of the Farniente pre-packaged lasagna company.

The process is simple and laid back: Pay 4 euros (covering entry and insurance), plus receive a ticket for a free tiny piece of sponsoring Farniente lasagna at the end. No numbers for your jersey, helmet, or bike. Just “here’s a cue sheet and enjoy the SAGs” on the honor system for a low key event where the focus is purely on riding, meeting some new cycling friends, and experiencing the Flиche route. 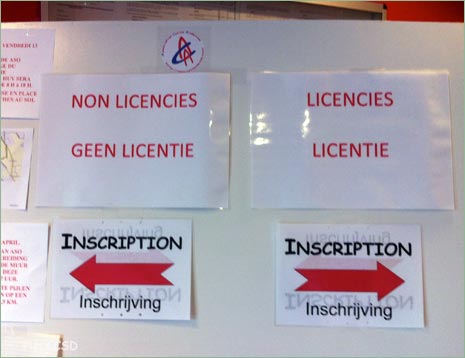 There’s not a lot of English spoken on route as well, so brush up on your French or Flemish.

Those that attend this event take their cycling seriously, meaning they are skipping work on a Tuesday just for this, but they keep the attitude light. As opposed to other cyclosportives, you will not see any cyclists on insanely trick gear whom seem to be riding it for the first time, or those on hybrids, getting caught up in the mix. Everyone for the most part is experienced and dedicated to the sport and know that at some point they will be ride up one of the most iconic climbs of the Ardennes Classics. In true European fashion, you also see some classic rigs and classic jerseys, and the occasional hair net and tattered cycling cap. Our modest group from CCSD (Cycling Camp San Diego)consisted of 3 Canadians (1 who currently lives in Dusseldorf, Germany), 3 Americans (1 who currently lives in Ireland), 2 British, and 1 German. A varied crew of eager riders indeed. 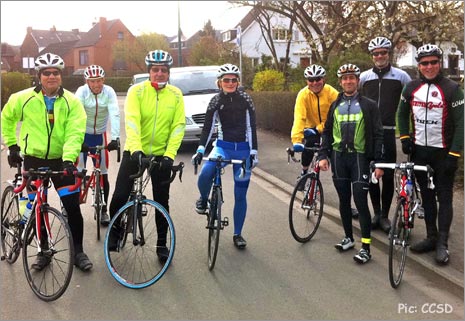 The route starts and finishes at the Complexe Andenne Arйna in Andenne, Belgium, about 12 flat kilometers from Huy. The Pros race through Andenne a couple of times on the road to and from the Mur. The route is marked extremely well with painted road directionals. 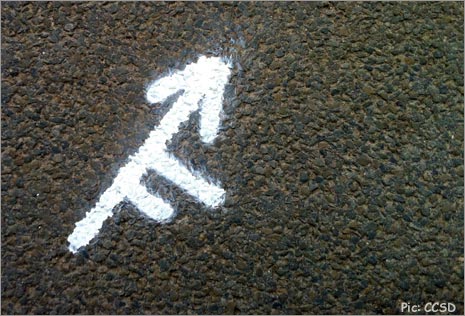 As we started to climb the Cфte de Landenne, we knew something was up. Stopped. Consulted the cue sheet. Headed back down and returned to our intended course. The rider of our group, who is well versed in sportif riding around the world, Leslie Reissner (also the book reviewer for PezCyclingNews), was the only one who embarked on the correct route. We would see him 47 km later at the feed zone. 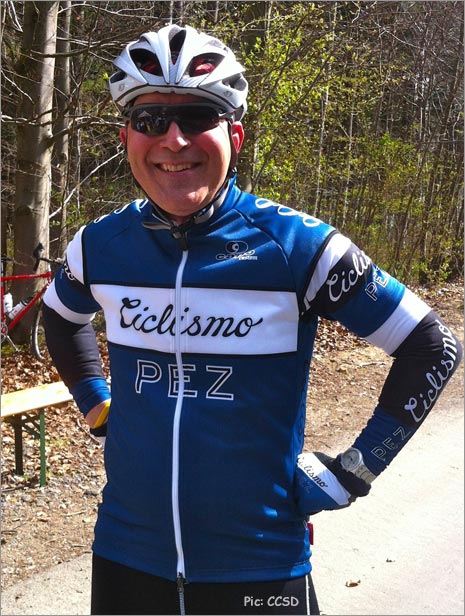 The route is interesting in that it peels through industrial areas, agricultural areas, and remote areas. One minute you’re climbing out of an industrial town, the next you’re on a one lane road ripping through the canopy of trees in total seclusion. You get a real feel for the Pro’s experience: harrowing narrow and wet descents, steep climbs that get steeper the more altitude you gain, twisty routes through towns that pop up on the horizon, plus wind; lots and lots of wind. 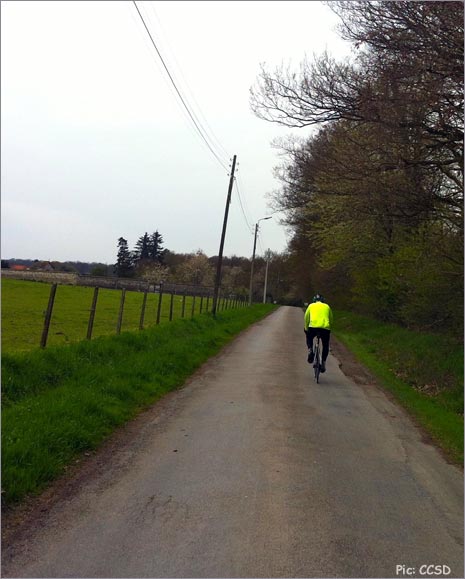 You understand how the Pros break into echelons, when you crest a hill that tops out at 14%, then levels onto an open plain, where the crosswinds nearly remove you from the bike. The spirit on this sportif though is one of team work. From the old to the young, male or female, you band together along those windy plains, each taking a pull, protecting and fighting your way to the Mur. 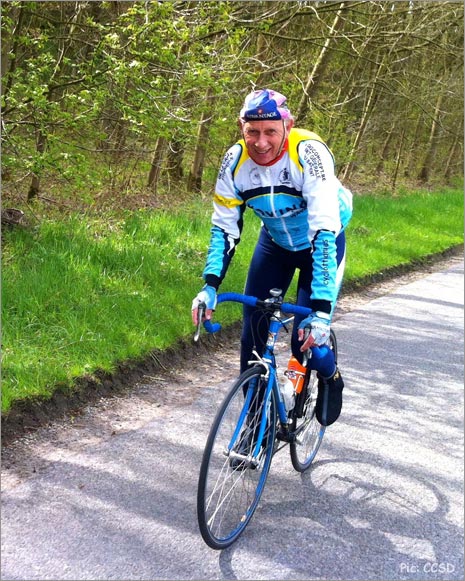 We passed a guy in his seventies on an fairly new bike, with a sharp new kit, and the most worn and tattered Lampre cycling cap covering the most worn and tattered leather hair net. That’s right: leather hair net with cycling cap over the top. We loved this guy. He was on our tail to the climb, then he would trail off a bit, then back on us on the descent. He pushed a massive gear, spoke only French to us, and was smiling with his gold tooth shining the whole way. He opted for a photo at the rest stop. 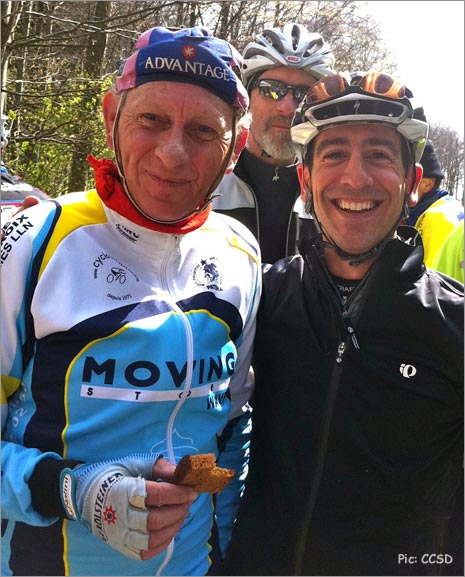 We were ticking off the same hills that the Pros would tackle in the early stages of the race: Cфte de Peu d’Eau, Cфte Hautbois, Cфte de Groynne, and Cфte de Bousalle. These seemed merciless and they explained the tired legs of the Pros as they came across the Mur a couple of times prior to the finish the net day. Grades were 2 to 3 kilometers in length with ramps of over 15% and averages that you did not want to think about or face. It was best not to look at the Garmin and soldier on.

Myriad school children would run to the fences of their playgrounds and cheer for us as we whizzed by: “Vйlo! Vйlo! Vйlo,” they would chant. 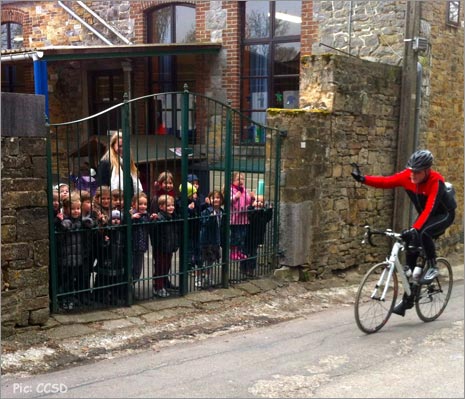 If you raised your arm or gave a wave, they would cheer all the louder. It seemed like each little town had a school and each of those schools was on lunch break and outside cheering us on. The best being the school at the bottom the Mur, where the kids would cheer for you on the way up and on the way down. It was as if the organizers of the Farniente scripted the cheering children.

The sole SAG stop for the 100 km route is at the top of the Cфte de Bousalle about 11 km from the Mur (which always is a launching point for a late desperate attack from the Pro peloton; this year being Andy Schleck’s launching pad for the small attack near the end of Flиche). Even though you’ve only chipped in 4 euro, the FFBC does not go light on the “ravito” fare: dark chocolate, light chocolate, waffles, cookies, sausages (yum!), cheese (double yum!), orange, pineapples, bananas, assorted colored beverages, cake, cake, and more cake! We were shoveling it in. 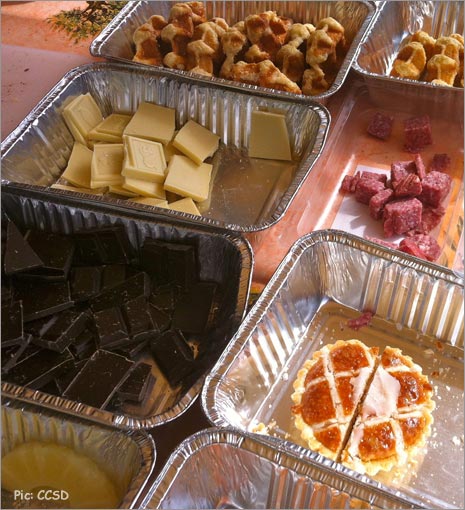 After a descent through the trees, you land on the busy road leading from Andenne to Huy. Bike lane most of the way, cars yielding cyclists the right of way for the remainder. Through a few hectic roundabouts and then onto the local narrow climb that is an appetizer for the main dish: the Mur du Huy. You never are alone on this course, as there are just enough fellow cyclosportivers around.

As you approach the true beginning of the Huy, the FFBC routes you around the back side, because they received pressure from the ASO, promoters of La Flиche Wallonne and the Tour de France, that the Huy is closed to non-event officials. But as the locals know, closing the Huy is impossible. For one thing, it goes through a neighborhood, and also the Pros are out there as well, checking out the course one last fear-inducing time. So the markings go straight, but with a wink and a nod from the Farniente organizers, us cyclosportivers bear right and onto the ever steepening gradients. 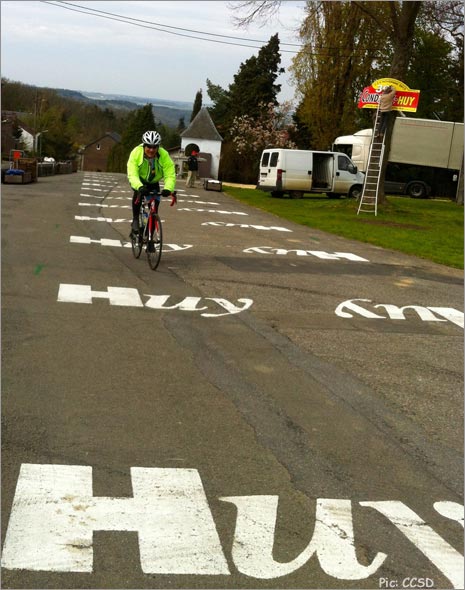 The hill’s vertical shows on the faces of the few sportif riders amongst us. The Team Sky, Team Green Edge (both men and women), and MCipollini-Giambenini-Gauss pro teams all sail by us, as we click into our 39-28s, 34-28s, 34-29s, and 34-32s. The breathing is labored, but the thrill of the climb is in us.

We have been treated well—like family—by the Farniente organizers and we are proud to be a part of cycling lore. We take pictures of each other at the top. Videos are taken of the Pros, who begrudging smile at the camera while they spin away a training ride. 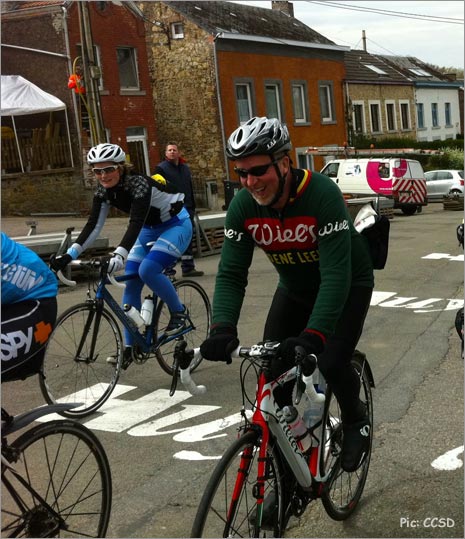 We all assemble. Pat each other on the back and look at the cue. There is a further loop to the south out of Huy that the Pros tackle on race day. It includes two more summits (Cфte d’Amay and Cфte de Villers). We all smile as we realize that we can just zip down the back side of the Mur and onto the main road with a 12 km flat(!) drag to Andenne and our complementary piece of lasagna. The choice is obvious. We descend the Mur and head back to the sports complex. It is a block headwind the whole way, so we trade turns, but at a gentle pace. We are winding down. 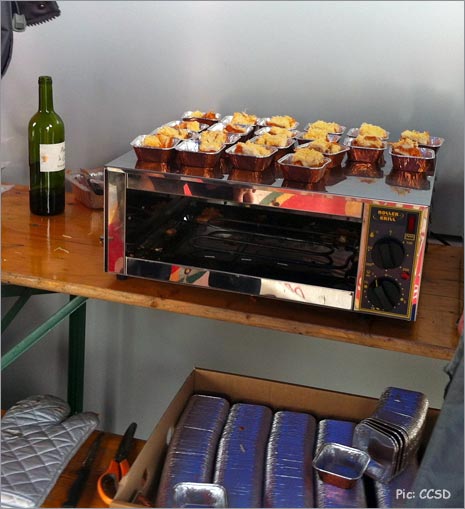 More Belgium civility as the sport center has a full bar with the standard Jupiler on tap. They also have Hoegaarden, which is a tastier choice. We rounded up a few pints. It was a school cafeteria filled with chatty cyclists downing beers and coffees, and the odd baguette, along with their lasagna. The writer of this article had a few pieces, as his comrades were busy drinking their post ride calories. All the bikes were lined up outside. Nobody worried about them being stolen. We were among friends. We were among family.

We loaded up the van. Most napped on the way home after a few more “lies” about derring-do on the Mur, and we all looked forward to next year at the Farniente Classic. Maybe we’ll tackle the whole 100k or even the 155k, or maybe not, but the distance is not really the point after all. 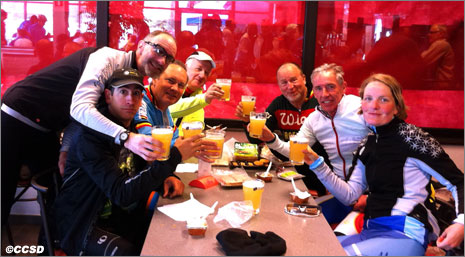 A hard earned beer was a just reward for everyone at the finish. 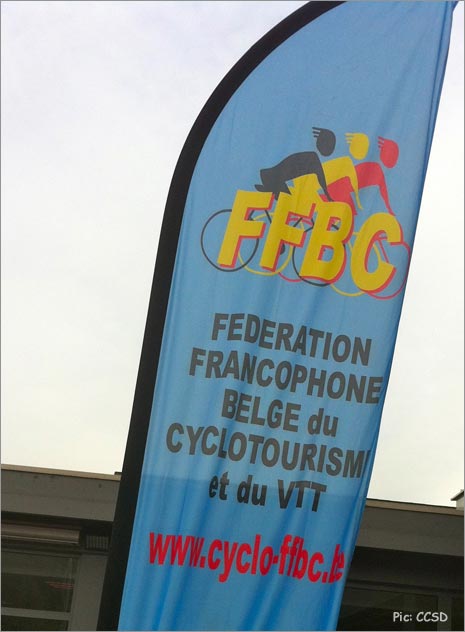 More Info
• Robert Panzera is the president of Cycling Camp San Diego
(CCSD), which specializes in week-long training camps located in the United States and Europe for serious cyclists of varying abilities.

The Adventures of Gino Bartali, Part One