Tomorrow’s penultimate stage, which takes in the Tonale, Gavia, and Mortirolo could well be one of the most difficult stages in recent memory, so it seems only fair to detail the biggest climb of the day, the Cima Coppi for the 06 Giro, and one of the most beautiful climbs in all of cycling: The Gavia.

I had wanted to see the Giro since I started riding a couple years ago. Not long after starting I hurt my knee and because I was riding way too much, so I borrowed a video of the ’99 Giro to pass the time and that was it.

I wanted to know everything about this race. I fell in love with Italy’s national tour, and when I came to Europe, one of my biggest dreams was to find my way into the Dolomites/Alps. I got my chance last week to se the final stages of the Giro, and ride some of the most epic climbs in all of cycling. 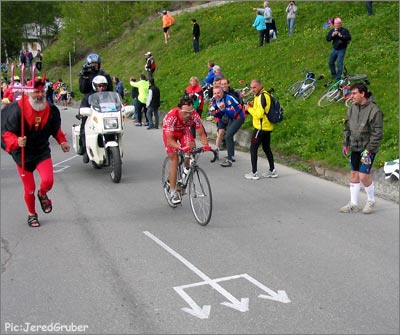 A three day trip into the big mountains of Italia is the stuff of epic literature, so I’ll focus instead on the one climb that I consider to be the defining moment of the trip, if not my entire year – the Gavia – 17 km at 8%. Andy Hampsten might have previously described the Gavia, but his eyes saw it through a blinding snowstorm and as a racer. I saw this as another pure tourist, a devotee to this beautiful sport, a fan, a pilgrim. The road was the Mona Lisa and the valley her home, the Louvre.

I had to get to the Gavia first though, and this was via the monstrosity that is the Mortirolo. Oy ve, the Mortirolo is quite the brute, you know it can’t be good when you read reports of Lance Armstrong hurting going up it in his 27. I climbed it in my 23, and I kid you not, I did not sit in my saddle except to take pictures as I trudged up. I got to the top and my arms and hands were sore. A true sign of a tough climb. Every one of us has done tough climbs at grades as steep if not steeper than the Mortirolo, but the thing about il Mortirolo is that it’s nearly 13 km long, no WAY to fake this bad boy. After the narsty ol Mortirolo, it’s on to the Gavia… 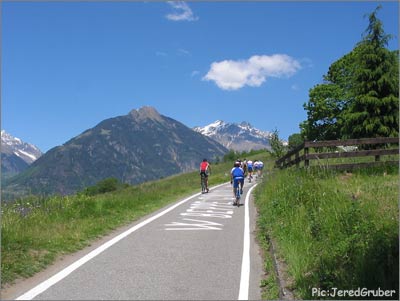 The Gavia starts out very nicely indeed, especially considering the climbing valley road that leads up to the start – a slight downhill and then a very mild grade. I like. In the first kilometer I met up with an Italian, Massimo. Cool name – cool guy. Massimo was an excellent riding partner, and luckily he knew a wee bit o’ English. He told me about the 20+ times he has watched the Giro, how he saw Marco Pantani “fly away from his opponents” on the Mortirolo. You name it, he has seen it, a real card carrying member of the tifosi elite! 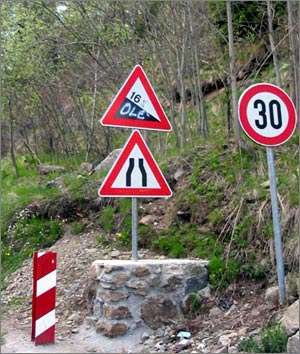 We chatted, I gawked at the views, and then a few k’s into the climb, that most famous of famous signs popped up – 16%, the road narrows drastically – barely wide enough for a car , and that was where Andy Hampsten did his thing in a raging blizzard in ’88 (see previous Pez article), it was really cool to see. 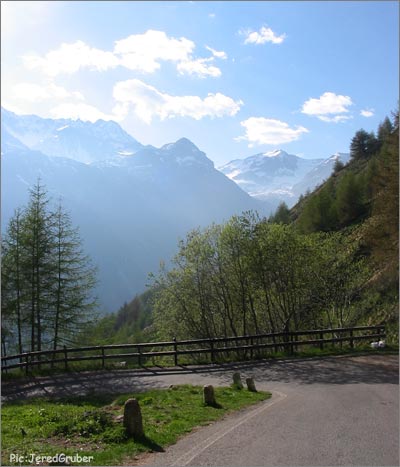 It climbs steeply for a while, switchbacks all over the place. This is a good thing though, as there is always a different view of the innumerable mountains that guard the valley. The views and road were so utterly perfect, it made all other climbs that I have ever done or thought beautiful, look average at best. I don’t exactly know what set the climb so much apart from any other climbs, but as a lover of all roads that head skyward, well, it’s just nice, very very nahssss. 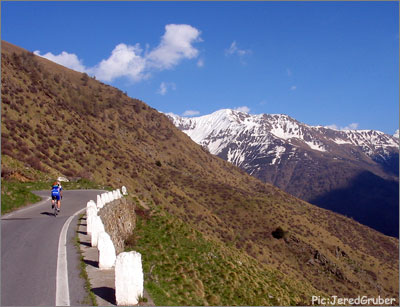 As we trudged slowly up the mountain enjoying the perfect evening light, we came across a woman on a mountain bike. We passed her, Massimo takes a look back, nods, smiles slightly to himself, turns to me and says: 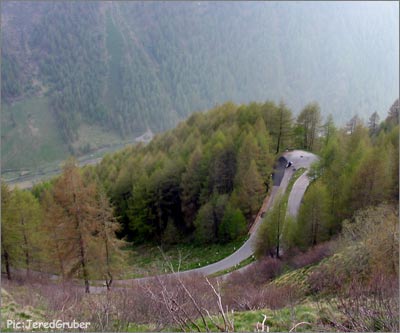 Towards the end we went through this wicked tunnel; I don’t have much experience with tunnels, so this was new stuff. It wasn’t overly long, but it climbed the whole way through, and at about the middle of it, there was only a tiny speck of light to be seen at the end of it. The light always seemed to recede further and further away, at one point I looked down and I couldn’t see anything, I couldn’t see my hands or my legs. It was the eeriest feeling, but like everything on the climb, it was wonderful. I don’t even know how to describe the feeling, it felt like I wasn’t attached to a body anymore, yeah, I know, funny how that works when you can’t see your own body. Seriously, it just felt so incredibly weird, almost like flying.

After the tunnel the snow banks really started to grow, and it was around here that I saw his name. Pantani’s name was still painted in the road, it looked almost ancient. The road had chipped away in certain places, but it was still there, the yellow letters with the big P, it was still there. 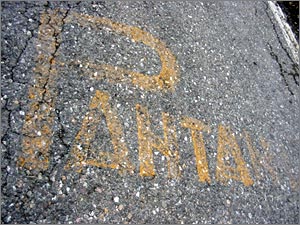 The whole way up both the mountains, I just felt like I was riding in the paths of the great ones, and just thinking about how they followed the same path just made an already perfect climb that much more special. Pantani’s name just seems like it belongs on those great climbs. That man climbing was just as Massimo described it: flying. Beautiful, and just thinking about that, around 7 pm on this perfectly deserted climb, it was special. It was one of those times that you know you’ll never forget and that it was so perfectly amazing in some fundamental way, and yet I can’t wholly explain why. 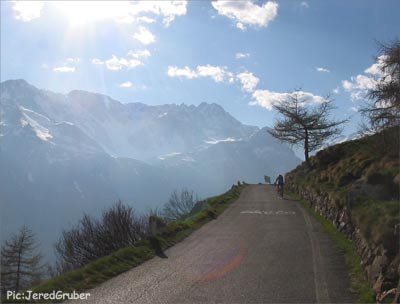 Am I overreacting a bit? You might think so. Am I exaggerating? You might think so. But that day was just one of those perfect days when every piece of the big puzzle just sort of fits together and perfection ensues. I know I can’t ride the Gavia everyday, but I can take that ethereal feeling of perfect peace with me. I know I will, and I will dream about it until the next time I go there, and I will ride it again and again. If you truly love to ride your bike, there is no way humanly possible that you could ride the Gavia and not finish your day feeling completely refreshed, almost new. 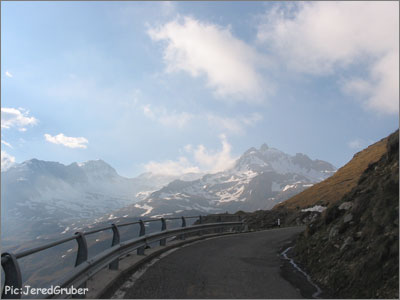 So here’s the route – start in Bormio (or Tirano), do the lovely 40 km or so downhillish to the Mortirolo turn-off, head up the Mortirolo, descend it, head up the valley to the Gavia, and once at the top it’s an amazing descent into Bormio. All told, about 130 km and about 3500 meters of elevation gain, good stuff. 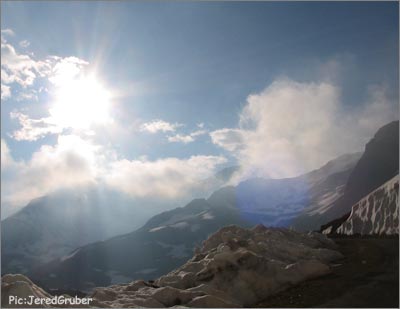 When we finished the climb, Massimo shook my hand and said:

“I look forward to meeting you on another climb someday, it was an honor.”