Sometimes my best rides have been those with the least forethought, the least amount of time, the most luck, and just plain looking for the squiggly lines on the map. Such was the case one beautiful April afternoon when we pulled off the Autostrada just north of Verona in a little town called, Peri.

One of my favorite rides from our year spent in Innsbruck was probably one of the most random. Ashley and I were headed down to Istria to spend the weekend with two of our great friends, Michael and Marijana. We wanted to ride that Thursday afternoon, but of course, we were running many hours late, so we’d need to find a place en route to Croatia to ride, and since it was very late, it would be just a short ways down the road from where we lived in Innsbruck.

A quick check on the map for roads heading up from the Adige Valley (the valley that runs north/south from the Reschenpass to Merano to Bolzano to Trento to Verona then to the Adriatic) didn’t yield much. 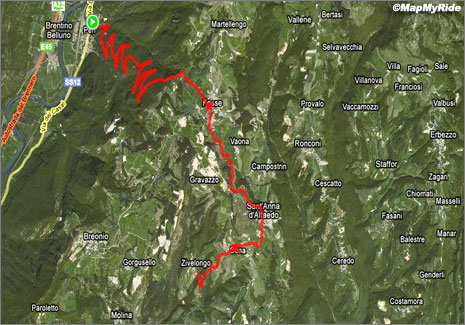 It’s 10km from the Autostrada exit to Peri – and the start of a memorable bike ride.

The imposing flanks of the mountains that tower over the valley floor aren’t exactly spewing roads. We did find one very squiggly looking road though heading up from a town called Peri – only 220km from Innsbruck. That would work just fine! 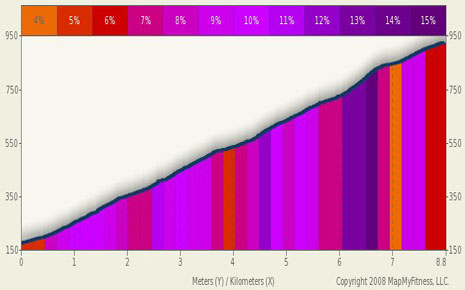 The climb has a few steep pitches of 15%, but for the most part, sticks to the more reasonable inclines in the range of 7-10%.

We drove down with no idea to expect, except for a climb. 2 hours later, we pulled to a stop at the base of the climb and found it to be a little more famous than we had expected – a Gran Fondo sign adorned the start of the climb. 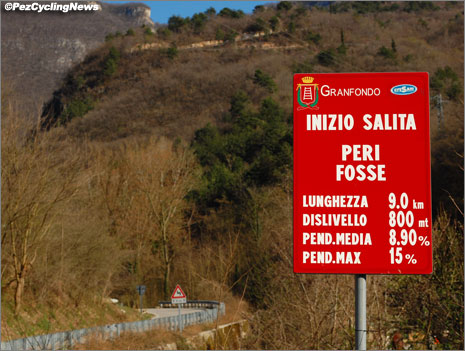 At least I wouldn’t have to worry about Ashley asking me her typical questions – how long, how steep, how high.

We were still digging out from a long, long winter. The weather in Innsbruck had been horrible at best, so when we started our ride on this wonderful late March day, we were ready for the worst. 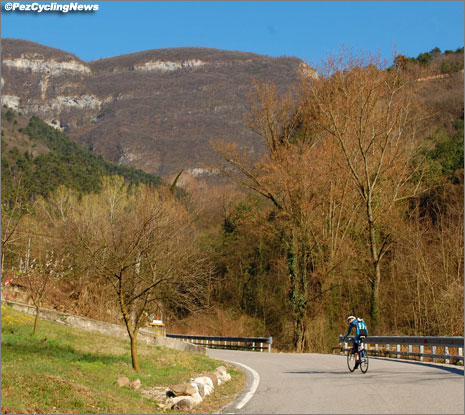 It was a little chilly as we started, but within 5 minutes, we were happily shedding clothes on a bike, outside, for the first time in many months. Our pearly white legs saw daylight for the first time since November of the previous year. It was a triumphant moment as I felt sweat begin to trickle down my brow. 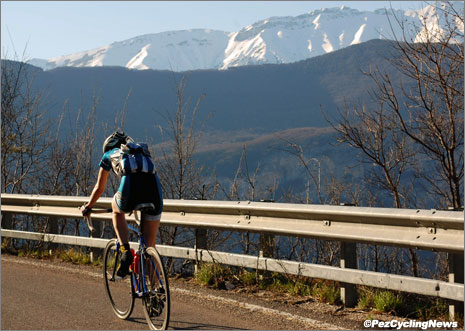 Lago di Garda is off in that direction.

This was uphill bike riding at its finest. I’ve said it before, I’ll say it again – I like em kinda steep. I don’t want to climb for four days. I want a solid grade that gets me to the top in as few kilometers as possible without making me call for my sherpa, Lop-Sang. The climb from Peri to Fosse gives just that – an average grade of just under 9% is more than comfortable with a compact gearing of 34×25, or 27 in our case. 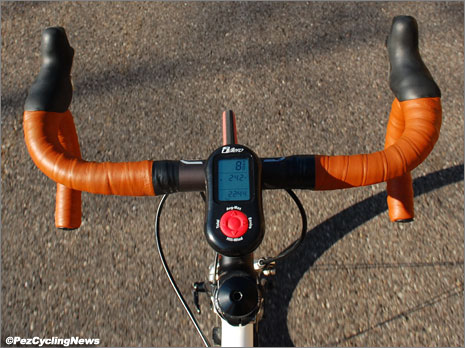 My iBike iAero made sure I knew what I was dealing with as we climbed.

Don’t scoff at me either – I grew to be very sensitive of climbing grades over the past year. And rightly so! I had an interesting conundrum – I wanted to encourage Ashley, a brand new convert to bike riding, but still do some cool rides. I love Ashley to death, but I’m not going to spend my time riding up and down river valleys. 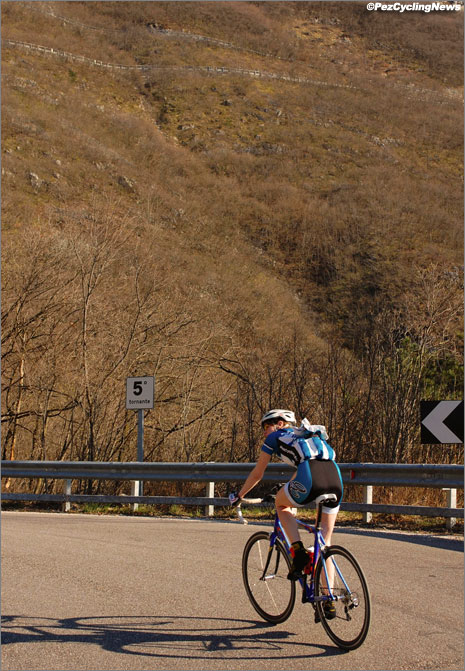 It’s always a bit of an imposing view to see the upper switchbacks above you.

Of course, ‘cool’ rides when you live in the Alps means going uphill, so a delicate balance between cool and reasonable needed to be struck. We had some growing pains, like the one time I took her up a climb that averaged over 10% for 12k, but we struck gold with the climb to Fosse. It was steep, but it wasn’t too steep. It was a fair challenge because Ashley had the proper gearing on her bike. 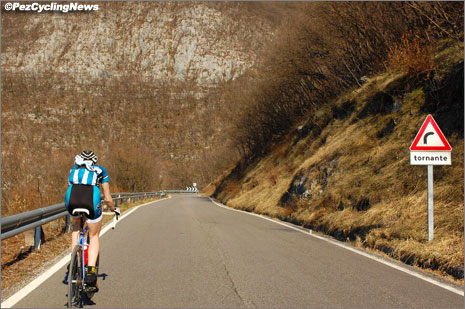 There were some almost long straight stretches, but they always ended at just the right moment with a switchback…for me. I hate riding in a straight line for too long.

The climb itself almost seems like it was designed for bike riding – that 9% grade is pretty close to the ideal grade for churning out the best VAM (climbing rate measured in meters per hour) possible, the 10 switchbacks that dot its 9km are nicely spaced to break things up, and the views, well, the views are stupefyingly perfect. 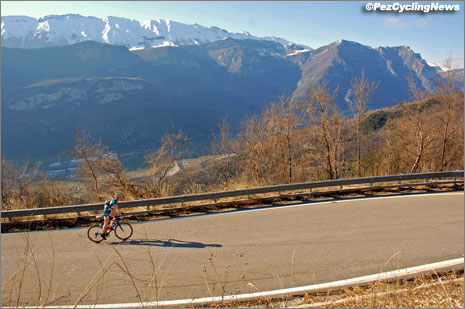 The views toward Garda were immaculate.

It didn’t take very long before the views began to unfurl before our altitude gaining bikes. That’s a welcome change to some climbs where you feel like the view reward is much too highly protected until you get to a point where you’ve deposited way too much energy and all you get is that one view? You know what I mean. 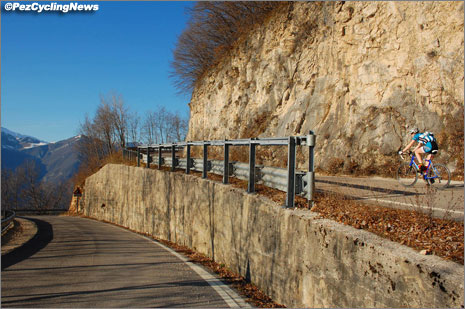 It’s funny looking back on this climb, because when we climbed it, we figured we’d stumbled onto something completely unknown, like we were explorers or something. We only came to find out later that this climb was anything but unknown, it was the opposite of unknown – it’s famous. 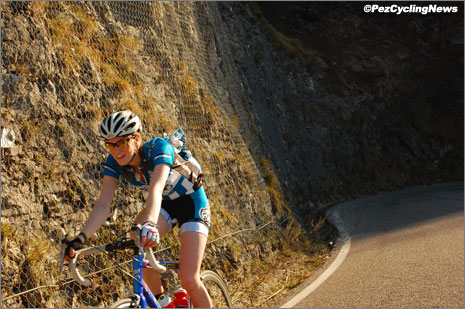 Ashley after making her way up the steepest section of the climb – doing just fine.

Sitting in the prime real estate just north of the cycling hot bed of Verona, the climb from Peri to Fosse is according to the great website, Italian Cycling Journal, a must do for all Verona area riders. I’ll one up that say it’s a must do climb in general. 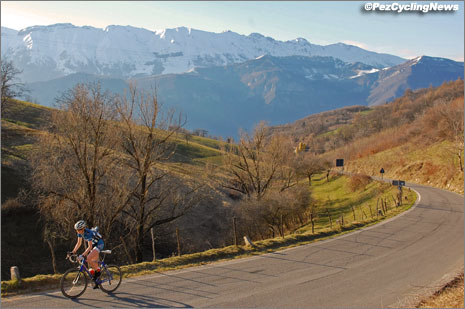 Almost to the top.

The Giro apparently thinks it’s worth riding as well – the 2008 Giro descended from Fosse to Peri en route to the mountaintop finish at Alpe di Pampeago. A certain, Emanuele Sella won that day, with Denish Menchov giving a sparkling glimpse of the climbing prowess that would take him to overall victory in the next edition. 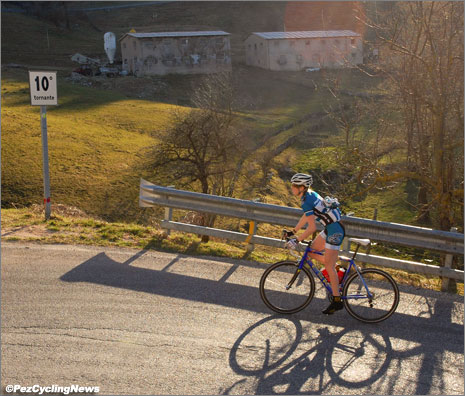 Anyhow, I digress. The climb is wonderful, it’s worth the visit by itself, but especially if you’re ever driving through the area. That’s the cool part though, because it is such a well trodden path north (or south) from Verona to Bolzano, it’s always on the way. 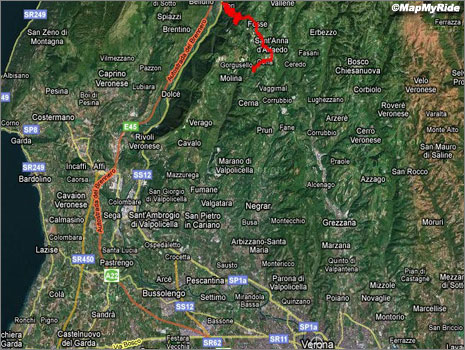 I’m not lying – Verona is just down the Autostrada.

If you’re ever riding in the northern part of Italy, the chances that you’ll take the Autostrada right past this climb are pretty close to 100% unless you’re into adventure car driving through the mountains and taking 17 times longer to get from one place to another. 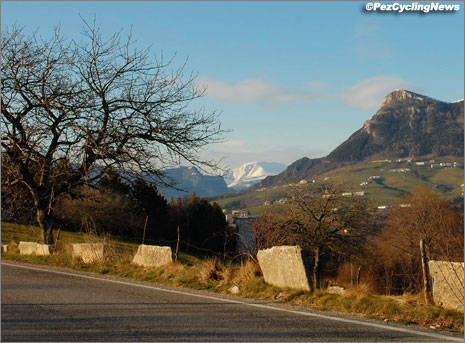 Looking back toward Fosse.

There’s more to this than just the climb though. The climb is honestly just the antipasti, and a really, really tasty antipasti at that. Once we arrived to the top, we took a brief pause, added all of our clothes back on, since apparently it’s a lot cooler in March, in the evening, in the shade, 800 meters higher than our parked car. Then we kept on riding. The first views of the countryside beyond the climbtop town of Fosse were – insert superlative here. 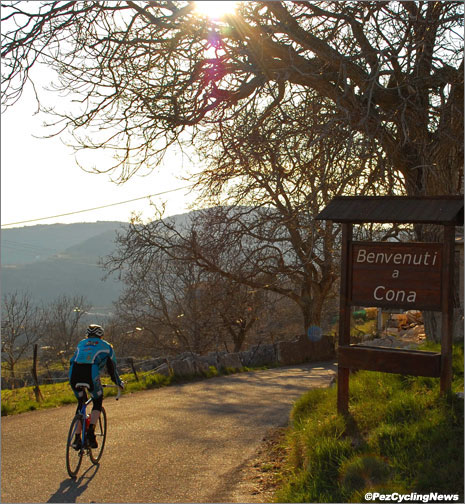 There were tiny towns dotting every bit of great mountainside as far as the eye could see. At first glance, it was obvious what we had just stumbled onto: it was a playground for bike riding. We only had a little bit more time before the sun disappeared for the day and took the last bit of warmth with it, so we pressed on in the direction of Verona, but only a little ways. 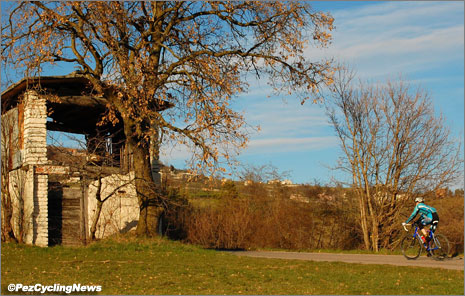 The fresh Spring was doing its best to coax the area out of its slumber and back to life. It was succeeding handsomely as the grasses took that almost electric green color of early Spring, the trees took to budding, the flowers were blooming, it was one of my oft-searched for, seldom found, breathtaking moments – those times when you honestly feel your breath catch in your throat. 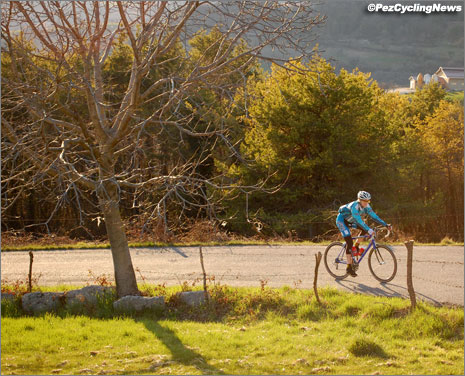 I have very few regrets from our time in Austria. One of my biggest though is not getting back to this area to ride bikes. I swore up and down that afternoon that we’d be back to explore this area in earnest, but like most oaths said on a gorgeous spring late afternoon while riding bikes, it fell to the wayside of forgotten ideas, sentenced to a misty memory until just this week when I was going through my old pictures and remembered how incredible that one day in March was. 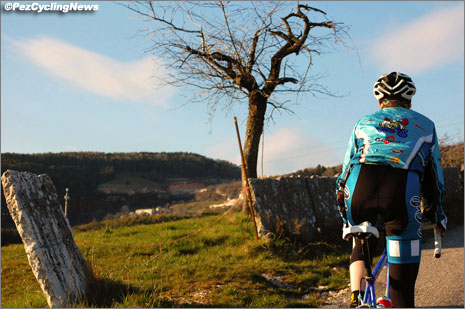 The riding along this kinda sorta high plateau is bike riding perfection – small towns, curvy roads, tiny roads, orchards, flowers, ups, downs, steep, gentle, sunny. At this moment, I can think of very few places that embody all that I love about riding bikes…in one place. This is one of those holy spots. 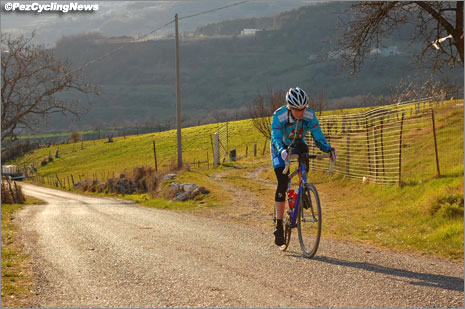 We won’t be back in Europe for a little while yet, but if you ever find yourself zooming up (or down) the A22 en route to some amazing point in the north (or south), take a few hours to enjoy this special place. It’s worth the effort. 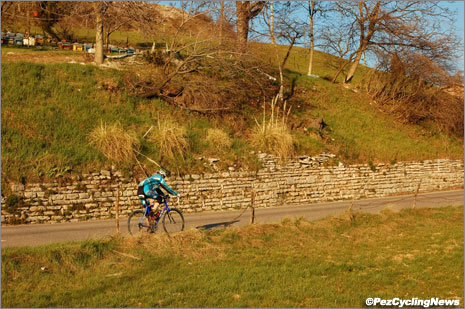 The possibilities in the area are innumerable. This is a ride easily taken in from Verona – and hey, there should be a few people in Verona come the end of May next year, correct? I know almost nothing about the area, but from the little bit that I saw, you really can’t go wrong. Angel from Italian Cycling Journal has a nice write-up of the area as well. 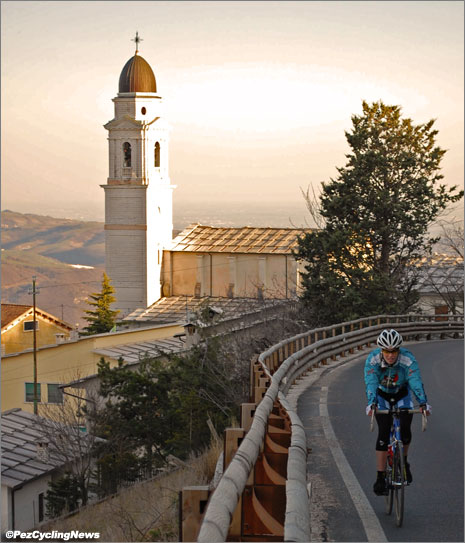 If you love uphill time trials, there’s a time trial from Peri to Fosse every year. Last year’s winner stormed to a time of 26 minutes and 54 seconds. Holy moly. For more information go HERE. If you’re more into the whole extended bouts of pain thing – there’s the Gran Fondo Luca Avesani on September 19, 2010 – the extremely challenging Gran Fondo takes in the gigantic Monte Baldo, Peri-Fosse, amongst others. 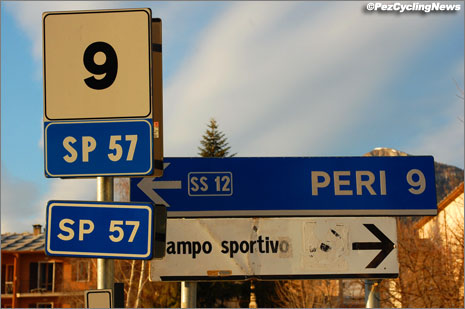 After a great ride, all that was left was to get back down to Peri.

After a far too brief hour of exploring the hills and roads just outside of Fosse, we had to turn back and enjoy an immense descent in the last flickers of the day’s light. It was a tremendous downhill ride to our car. We arrived back to our car in one of those euphoric states brought about by descending far too fast and not dying compounded by the perfection of the rest of the ride. It’ll be a long time before we get back, but I assure you, we will be back. 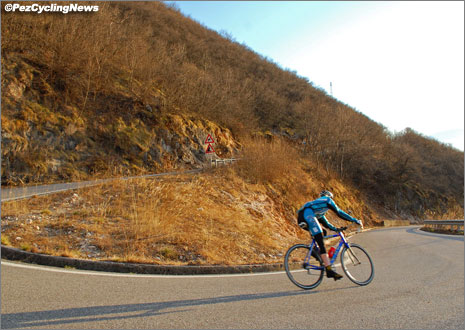 For more riding adventure pictures and everything else under the sun, check out our Flickr page.