So, riding in Texas is mostly flat, with only tumbleweeds and armadillos to avoid right? Well, not exactly. You see, Austin is situated in what’s known as the Texas Hill Country. Once a year in November a group of crazy people, er, dedicated cyclists take on something that’s known as the Tour Das Hugel.

It’s hard to believe, but the organizers manage to squeeze ~ 14,000 feet of climbing out of 107 miles in and around Austin. The ride has always been free to participate in, and the only reward for finishing is a nice cotton t-shirt. More than enough reason to subject oneself to hour upon hour of suffering on the bike!

The day started off beautifully, a perfect fall morning for a nice spin around Austin!

With the mist-covered skyline in the background, 400 or so riders started the ride. The first half of the course would have to be considered a “warm-up” if you knew what was to come in the second. There were groups of fast guys off the front early on, and I made sure to keep my distance to avoid falling prey to the temptation to go just that little bit faster than I wanted to.

Looking ahead on the map, there were roads with names like Toro Canyon, The High Road, Terrace Mountain, and Lost Creek all lying in wait, and I knew I’d need to conserve as much as possible in the early going. We hit the first really steep pitches of the day on Toro Canyon, with sections ramping to near 12% grade. Following that was what I considered the first real test of the day, The High Road. We rolled downhill to the base, and it immediately ramps to 20+ % gradient! Think Koppenberg without cobbles, but with SUVs.

Next up was Terrace Mountain. It seems to start a bit easier, you know, 9-10% grade. But after Ѕ mile or so, it pitches up to near 24%. Yikes. Things were starting to thin out pretty dramatically even this early in the ride. Some of the folks who thought it was a good idea to hammer out of the parking lot were, let’s call it, reconsidering their decision… And this was 15 miles into 107. The remainder of the 40 mile first loop had a few testing sections, notably Lost Creek, 1.5 miles & 6% average grade and a high of 13%. Tough to be sure, but nothing compared with what was to come…

Coming back to the start/finish line, after a short break to see my wife and son, it was time to resupply and tackle the real challenge that Das Hugel offers. As we rolled through the hills leading up to it, crossing the highest point in Austin, Mt. Bonnell stood at a whopping 785 ft in elevation. Doesn’t sound so tough, huh? Well, at 14% it was still a kick in the teeth. From there it was on to the first of 3-4 climbs that were in the back of my mind from the very start… First up on that list was a road named Smokey Valley. 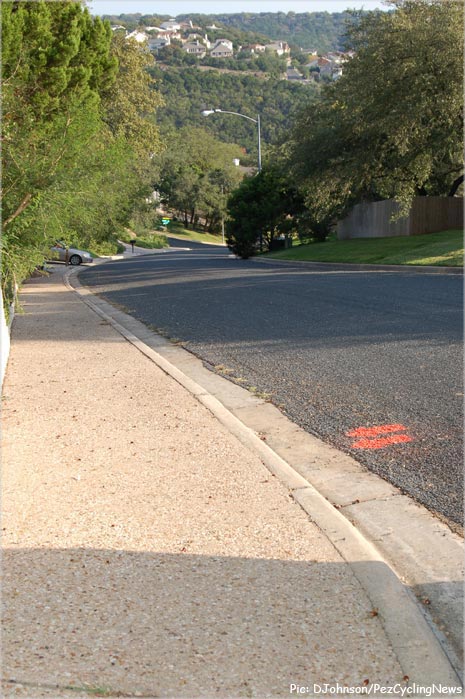 It’s hard for pictures to do this road justice. The steepness just doesn’t come through. At the mid-point of this Ѕ mile long climb, the road tilts up for a short (~120ft) stretch to over 30% grade!! Impossible you say? Well, I thought so too, but that’s what my Polar 720 keeps telling me, so I’m going with it… That and the fact that my heart rate maxed out. At 4mph… I made it up and over what I considered the first real test of the day. I cleared Smokey Valley with a group of about 10 other riders, and I didn’t hear a single word spoken until several minutes later. It was me, saying, “That was awful.” Everyone replied,” yes it was.”

Before getting to what I considered the next real test of the day we had to clear a few “lesser” climbs to get to it… Rain-Creek Parkway was first to clear. Again, very steep, but mercifully short…

One more time for good measure.

Next up on the hit list was the double header of Beauford and West Courtyard. Beauford was on my worry list after Smokey Valley. It’s so steep that they’ve grated the pavement to allow cars to get traction when it rains. It’s bumpy, rough and really close to 30% grade for 70-80 feet at the bottom of the climb! After that it levels off nicely to around 20%. A group of us slowly ground up the 0.5 miles of unpleasantness mostly in the saddle, as it had become easier to climb seated even with the steepness of the climbs. I was getting over them without blowing sky high in the process. Courtyard and City Park followed in quick succession to finish out this most difficult (in my opinion) section of the course… 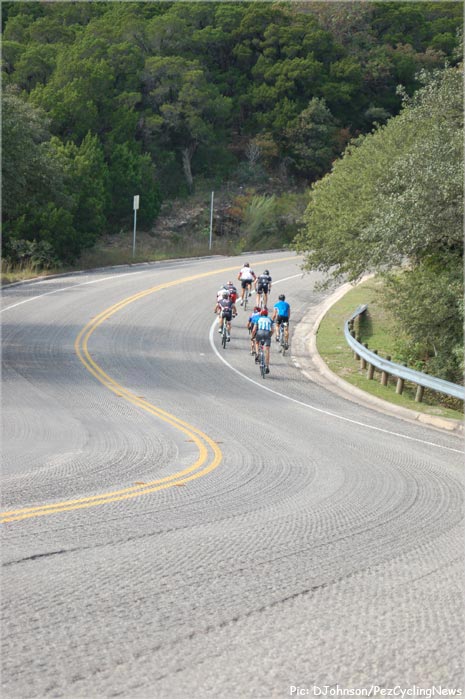 The last barrier was Jester Blvd. Coming at mile 95 this was definitely a tough one. A little less than a mile in length, with the top ј mile averaging 11%. Ooof. To save a little weight, I dumped both water bottles at the bottom of the climb. I knew there was a rest stop at the top, so I could lose some weight for the last push up the hill.

The rest of the ride is (by comparison) an easy spin… I rolled off Jester with a very satisfied feeling, knowing I’d definitely finish this one now. I pedaled in to find my family cheering me on!

The author, done with the ardors of the day, and his family. Chapeau.

Having my wife and son along in the chase car for a good portion of the second loop was critical. Without that extra bit of motivation I would have had great difficulty pushing through the remaining 67 miles. All in all, I totaled over 10,000 feet of climbing for the day and covered 107 miles. Certainly my hardest one day bike ride ever, but also the most satisfying one to finish. Das Hugel definitely has the best volunteers, fantastic rest stops and the occasional weird food (boiled eggs at rest stop # 5 anyone, anyone??J). Oh, and lots and lots of climbing. All in all, a perfect Austin ride.

So, if you happen to be in Austin, TX the second week of November in 2010 and are looking for a challenge, just stop by any local bike shop and ask them where and when Das Hugel starts… I’m sure it will probably be the same answer as always, meet in Zilker Park at 7:00am on Saturday and be ready to climb…

***
Looking to do the route yourself? Check out the loop on MapMyRide.