The ultimate summer vacation, or the ultimate madness? Starting later this week, Destination Cycling will lead a group of adventure-happy cycling fanatics around France, as they spend the next three weeks riding every stage of the Tour de France route.

Destination Cycling’s Tour de France Challenge (TDFC) cycling team already will have ridden the Prologue Course through the Alsace wine region when the pro cycling teams arrive in Strasbourg in preparation for their July 1 Tour de France (TDF) start. The TDFC team will ride a day ahead of the pro peloton for the complete Tour. The team includes 8 U.S. riders and an international support staff, assembled in Strasbourg with one goal—to complete all 2,261 miles of the 2006 Tour route to reach Paris. Destination Cycling’s Director, Joe Tonon, has assembled a pro staff to ensure that the team arrives safely and successfully in Paris – a coach, an ops manager, a mechanic and 2 soigneurs will support the 8 riders. 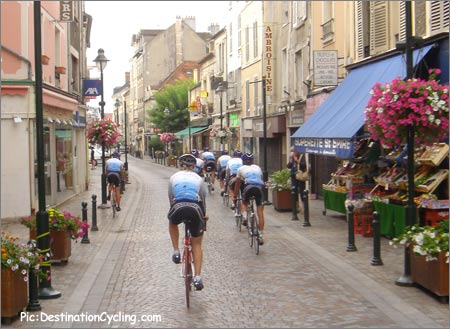 Ready for a different summer vacation…? How does riding the entire Tour de France route sound?

Kevin Mahaney, the 2005 TDFC team captain, said upon his Paris arrival, “You cannot beat the Tour, you can only try to survive it!” And survive it he did – his 2005 Destination Cycling team rode all 21 stages and completed 2,241 miles of the Tour, raising over $60,000 for the Tyler Hamilton and Lance Armstrong Foundations. Two members of his team are returning to ride again in 2006. This year, riders will be fundraising for charitable organizations of their choice.

PEZ spoke with Destination Cycling’s Joe Tonon just before his departure to Strasbourg.

PEZ: For someone considering the TDFC, what type of training is involved?
Joe: Most cyclists are accustomed to training programs focused on short-term, high- intensity events like a triathlon, where they do a lot of interval training. The TDFC team must transform its style of training to become endurance athletes–meaning more miles and more hours riding in steady-state/tempo zones, and more sacrifices in terms of less time spent with family and friends. Two of our riders this year, Joe Berkeley and Rob Kantor, have been training since September 2005. Kevin Mahaney spent 2 years preparing himself before his TDFC ride last year. Working one-on-one with a personal coach is a requirement when training for an event such as this. Most of our 2006 team has been working with Josh Powers, an elite-level coach, who will also be with us again on the road.

PEZ: As organizer, what has been your focus these last few months?
Joe: Just as in 2005, the months leading up to the Tour are filled with many organizational, operational, and team challenges.

One organizational challenge is to limit transfer times as much as possible. We spend months researching and reserving ideally located hotels to give the riders more time to recover and our staff more time to take care of them, work on the bikes, and prep for the next day.

One operational challenge is to select the right staff so that everything runs smoothly. This year we have returning staff from the 2005 TDF Challenge–our operations manager, Erin Berard (Seattle, WA), and head soigneur, Brian Pedersen (Copenhagen, Denmark). Having worked together previously, the experienced staff ensures a smooth departure for the riders leaving Strasbourg and a successful finish in Paris 26 days later.

There are many team challenges when training for events like the Tour de France. Last year one rider contracted mononucleosis, this year one of our riders already suffered a fractured collarbone. So making sure the team is solid and training properly is paramount.

PEZ: So how are the final preparations coming along?
Joe: In the last two weeks we have finalized our operational plan and prepared our equipment. Everything is coming together, mainly thanks to our generous sponsors: Clif Bar, Giro, Kryptonite, Smith, and Thule. From the start of this event, the support of these sponsors has been overwhelming. We have invited them to join us on the road and experience this ride first hand for themselves!

PEZ: How is the team feeling? What are their biggest hopes & fears?
Joe: Saddle sores seems to be the overall fear, but I think Joe Berkeley provided the best list: “The climbs, the descents, the crazy drivers, the food, staying healthy, overuse injuries, saddle sores the size of Buicks…but most of all, the sag wagon. I don’t want to get in the sag wagon.” As for what they look forward to: overwhelmingly, they all cannot wait to ride without having to worry about anything but riding, leaving their day-to-day worries at home. 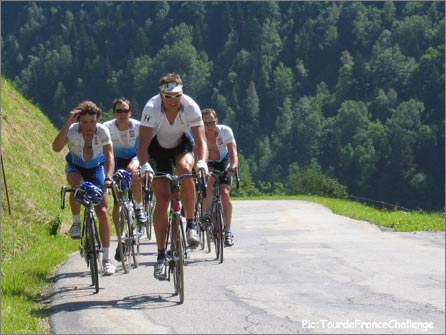 Make yourself comfortable, you’re gonna be here for a while… The group will ride every kilometer of the 2006 Tour de France route – a day ahead of the actual race.

PEZ: Tell me about the eight riders this year.
Kevin Mahaney definitely started a trend last year. We are seeing more former elite athletes (sailors, skiers, and snowboarders) turned cyclists. We have assembled a stellar crew of riders who have been putting in long hours in preparation for this epic ride. We are fortunate to have Josh Powers and Jimmy Railey back again from our 2005 team. Their experience will be invaluable on the road. Our 2006 roster includes:

• Rob Kantor, M.D.
Littleton, Colorado
Rob Kantor grew up skiing, cycling in Michigan, where he raced on the Michigan State University ski team, and competing in triathlons. He moved to Colorado after completing medical school in 1986, where he is a cancer specialist in the Denver area. There, he began amateur bike racing and master’s ski racing. In 2005, Rob won an age group Alpine national championship. Rob’s TDFC 2006 ride benefits the LMC Community Foundation. (Support Rob’s campaign here)

• Mark Nebeker
Tustin, California
Mark Nebeker has raced bicycles competitively for the past 15 years. He was recently inducted into the local L.A. Times Sports Hall of Fame for his prowess as a college linebacker. Mark is President and CEO of The Project Man, a project management-consulting firm that supports major aerospace and defense companies. Mark’s TDFC 2006 ride benefits World Bicycle Relief. (Support Mark’s campaign here)

• Paul Rady
Denver, Colorado
Originally from Michigan, Paul Rady has lived in Colorado for more than 30 years. Being a nature-lover, he became a geologist. Now he is the CEO for private Antero Resources. This will be Paul’s sixth straight Tour de France trip since 2001, and by far his most challenging!

• Patrick Kildow
Patrick is originally from Maryland and currently lives in Park City
Utah. During the winter months Patrick is a full time ski instructor
at Park City Mountain Resort. Although snow skiing, water skiing,
mountain biking and kite boarding are among his favorite sports,
cycling has quickly become an overwhelming passion leading him to
this event.

• Josh Powers, Coach and Rider
Flagstaff, Arizona
Josh Powers is back again in 2006 after coaching Kevin Mahaney’s ride to Paris last year. Josh has been working with Joe, Rob, and Alberto to prepare them for the Tour. When he is not coaching, Josh is a professional mountain biker. His secret to Tour success–he tends to weather better the longer the event is, and he prides himself on his ability to do almost anything at least once. He will ‘bleed out his eyes’ to do something somebody tells him he won’t be able to do, but he is not quite dumb enough to do some things twice.

• Jimmy Railey
Park City, Utah
Jimmy Railey grew up with competitive snow skiing, water skiing, and running in Deep Creek, Lake Maryland, and Vermont. A former triathlon geek, he finished the Hawaii Ironman in Kona. Since 1993, his focus has been competitive Alpine snowboarding. Jimmy was the National U.S.A.S.A age-group Champion in 2001 and 2005, and placed second in 2002, 2004, and 2006. He successfully completed the first Tour de France Challenge ride in 2005, and like Josh, is back again this year. 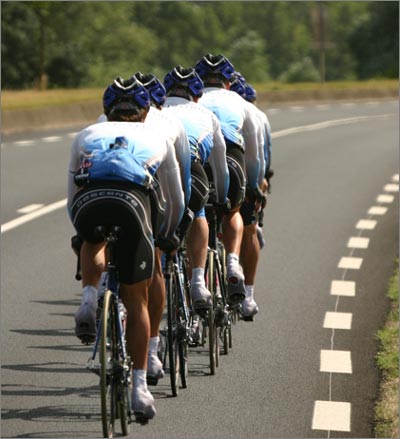 Preview the Stages before the Pros!
Stay tuned for an upcoming PEZ exclusive, “TDF Challenge 2006 Rolling Updates” filed from the road throughout the Tour. Hear what the riders have to say ‘straight from the bike.’ Tentative publication dates include: July 3, July 10, July 17, and July 28.

The TDF Challenge team rides the THE DAY BEFORE your favorite pros. Want to get the insiders’ guide to each stage? Follow the daily TDFC team updates (with photos) at: DestinationCycling.com

In 2007, Destination Cycling also will offer HALF TOUR packages. Choose either the first or second half of the TDF route. Visit www.destinationcycling.com for more information on how to register and reserve your place on the team!