We usually think of Europe when it comes to cyclist-friendly people and cultures, a completely different experience than what we get at home in North America. But Guadeloupe is much closer to home, and as we recently discovered, is also home to a people who absolutely love cyclists, and cycling. 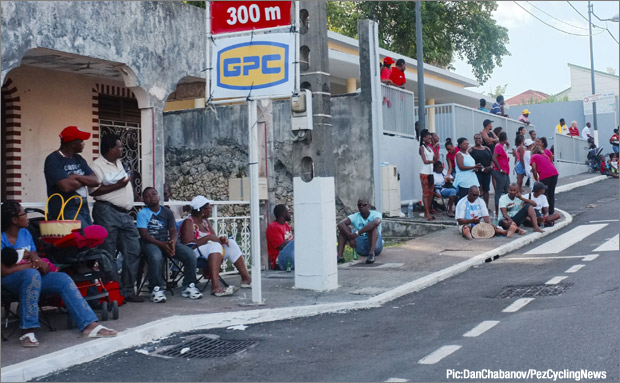 As an American bike racer I’m well aware of the daily struggle that is simply sharing the road with other human beings. In the US when you get on a bike, people in cars stop seeing you as a person and more like a mailbox. They don’t really want to hit you, but in their mind the consequence is small enough. Yes, I’m generalizing here, but not much. For most people riding a bike in the US, this is just a fact of daily life. 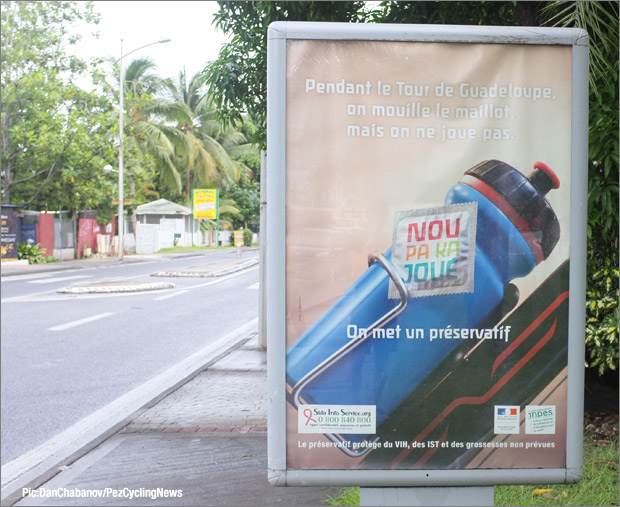 The first thing I saw when I got off the plane in Guadeloupe was a giant ad with bike racers on it. That was my first hint. Down the road from our hotel at a bus stop, there was another ad featuring a condom shoved into a water-bottle cage next to the bottle. So yeah, cycling was popular enough that it was used to encourage safe sex. 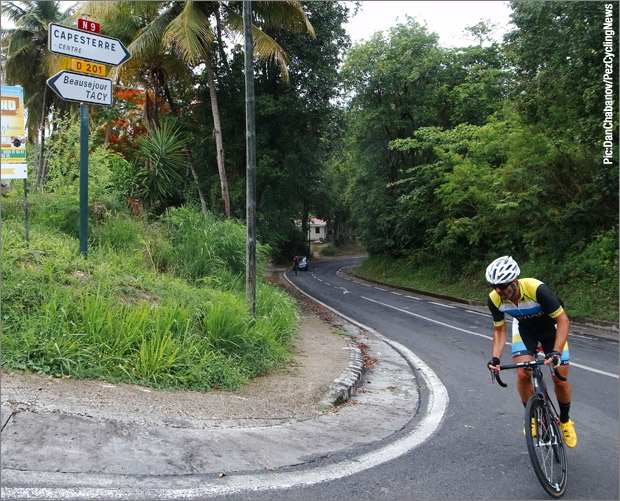 The French signs assert France’s rule over the Caribbean isle.

Seeing all this still didn’t prepare me for the reactions I got from the locals while riding. I’m used to being invisible on my bike. But in Guadeloupe if you’re on a bike and wearing a kit there is a nonstop chorus of cheers, clapping, and shouts of encouragement. As cars passed me they would give me plenty of room on the impeccable roads and often cheer me on from the open car windows. One of my rides on the island took me up an extremely steep six-mile climb up the volcano that created the island. The climb ends with a small lot where people park to hike farther into the rain forest. As I neared the top several people ran beside me clapping and shouting “Allez! Allez!” When I crested the last pitch and the lot leveled off people who were getting out of their cars clapped. It felt like some kind of bizarro cycling world. I feel it’s important to note that yes, there are plenty of riders on the island, but the majority of locals are not cyclists. These people cheering me from the roadside didn’t race. They just love cycling. 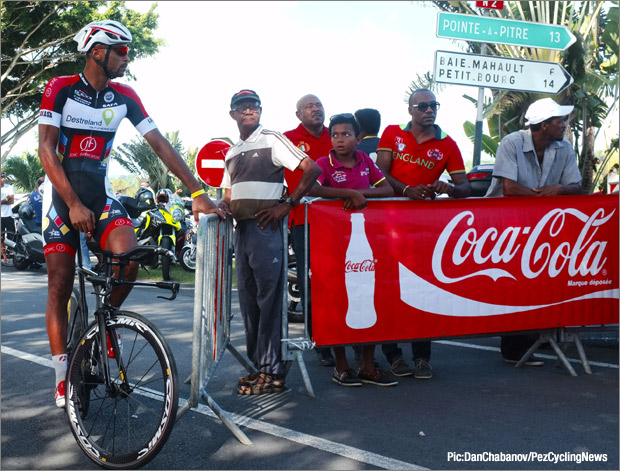 This love culminates with the 10-day Tour of Guadeloupe. I have to be honest. It’s a UCI 2.2, which is the lowest level of UCI stage racing. So when I found out we were going check out the time-trial stage I was a little bummed. I immediately thought of my experience racing the UCI 2.2 Tour de Beauce. Another stage race in a French speaking part of the world. That time trial was desolate to say the least. 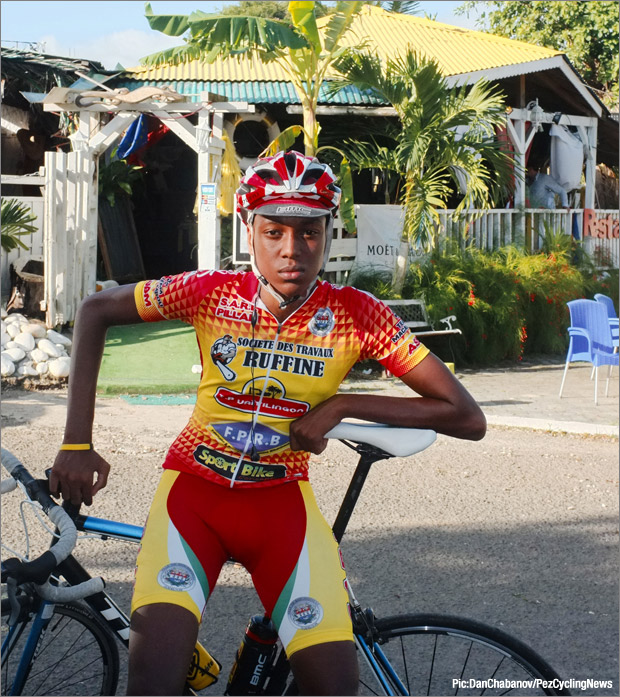 But this Caribbean cycling outpost surprised me again. The stage start-finish area was packed with people. In the US most of these people would be racers or other cyclists, but here in Guadeloupe it seemed like everyone had just dropped what they were doing for the day and came to line the 17-km course. 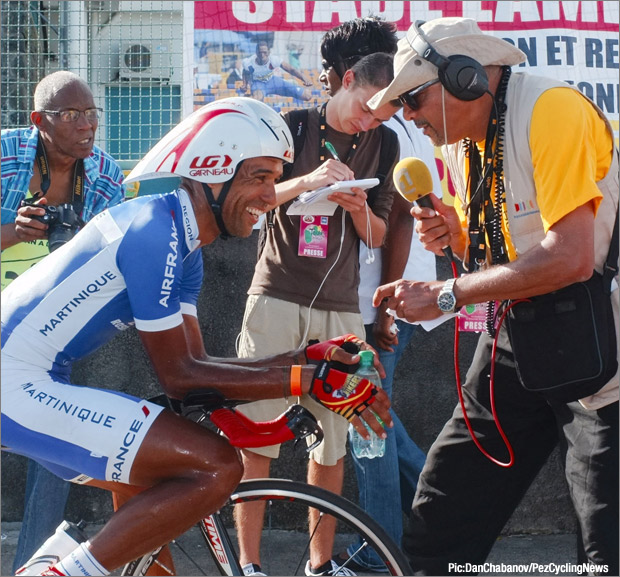 Chanel 1, which seemed to be the main TV channel on the island, was doing interviews with any rider they could get their hands on. At one point they even tried to interview me. I’m not sure why. Replays of the race were on prime time every night. 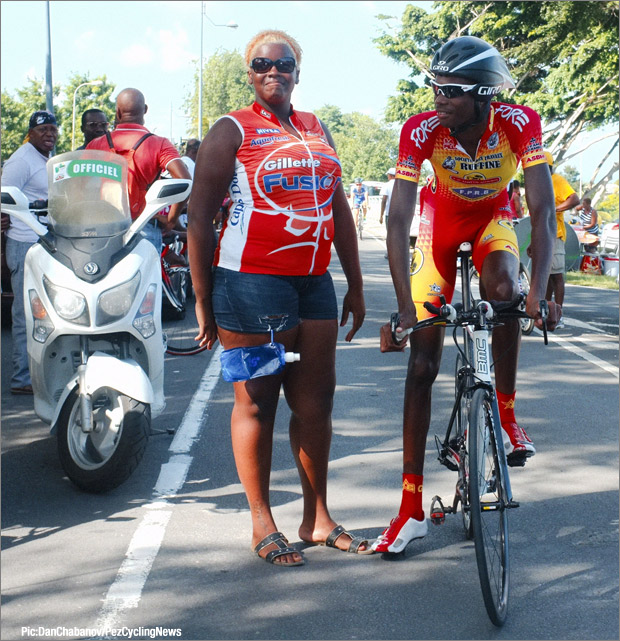 Heading out onto the course the chaos intensified. Without the constraints of start and finish-line barriers every meter, the course was lined with fans, their cars, and roadside refreshment carts. An oncoming rider could be heard approaching for half a kilometer: The cheering would just keep getting louder as the rider approached. A great warning system, but it requires some enthusiasm. 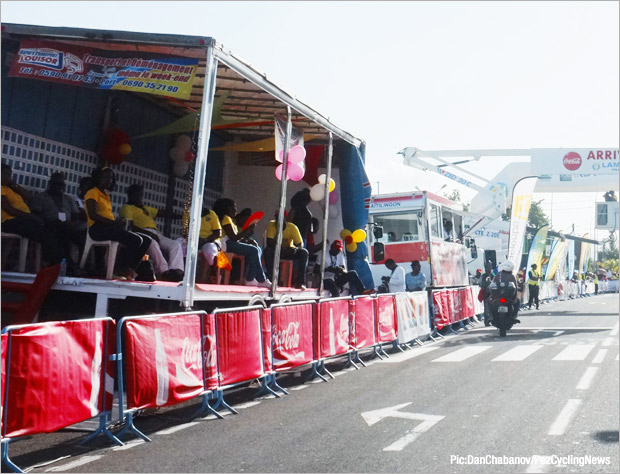 The entire island has a refreshingly chilled vibe – including the finish-line VIP seating.

Then there was the rolling support for the riders. It’s typical that each rider will have a follow car in a time trial. In fact I’m pretty sure the UCI has some fairly stringent rules about the number of follow vehicles any one rider is allowed to have. However, when a local favorite rolled through one of the roundabouts, he had the requisite follow car and nine motos following him. Yes, nine; we counted.

I had a chance to talk to the BMC mechanic after we got back to the start. We chatted about how the race was going and he couldn’t stop exclaiming to me just how crazy the driving has been in the race caravan. Which is a funny contrast to how well behaved cars are toward cyclists outside the race bubble. 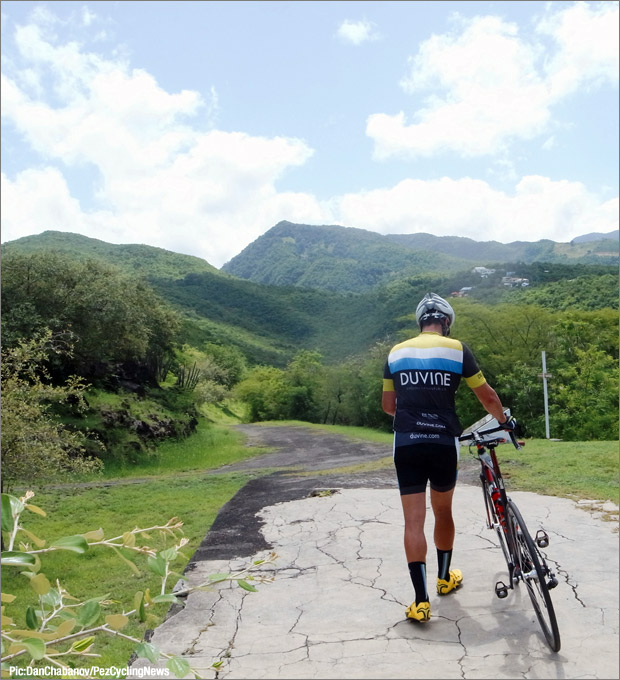 As we drove back to our hotel we spotted a group of riders cooling down while presumably riding toward their hotel. They were doing this on the highway. If this were the US I would expect, at best, that there would be honking and probably something being thrown at them. But this is Guadeloupe. No one honked. No one threw anything. The cars calmly moved over, gave the riders space, and proceeded on their way. The riders aren’t just treated here like people, but very important people.

• Get more info on Guadeloupe Travel