Spinning away indoors in the cold of winter, the ideal training paradise seems a far away fantasy. But for seekers of sun, surf, and serious cycling, the folks at VйloSport Vacations offer a March trip to a cycling nirvana. As told by one of their guests -they’ve got it nailed.

Last February, I discovered winter cycling paradise while staring at my basement wall. Actually my wife Carol had strategically posted a magazine article for my training “ride.” Spread out before my winter weary eyes were pictures of tan, sweaty cyclists riding smooth roads back-dropped by an indigo ocean and blue skies. I read about rides with Kevin Livingston, pro guide support, and feed zones. I drooled over descriptions of long, hot climbs, private beaches, and copious buffet meals.

Check out this view from our place in paradise.

Paradise found, I knew Carol was right. It was time to flee the Chicago cold for cycling nirvana. Officially called Cycle Caraпb, this cycling resort is based on the French Caribbean island of Guadeloupe (about 330 miles southeast of Puerto Rico) and organized by long-time tour operator VйloSport Vacations. It’s designed to give serious recreational cyclists and amateur racers like us a place to jump-start the season. Carol and I just had to decide whether we wanted to go when Kevin Livingston or Frankie Andreu were working as celebrity guides. We flipped a coin and chose to hang with Kevin.

We landed in Guadeloupe in the late afternoon and were picked up and driven to the Village Pierre & Vacances resort. VйloSport guide and tour manager Chris Gutowsky introduced us to our new digs for the week. He pointed out the private beaches, pools, restaurants, and grocery store as we walked through the lush grounds to our room. The view from our room was amazing—a full-tilt turquoise Caribbean—and it was all ours for the week.

Eager to spin our legs, Carol and I walked downstairs to the Cycle Caraпb Bike Workshop. Guide and master mechanic Jean-Luc Serriere set Carol up on her nice Fuji Provence road bike and helped me put my bike together. We had just enough time to fit in a quick hour spin to give us a taste of the challenging local terrain—everything from flat coastal roads to steep, mean rollers.

We got to meet the other VйloSport clients and Kevin Livingston at dinner. There were about 15 cyclists and 8 non-cyclists, including kids from 4 to 15 years old. I met one woman who didn’t ride but was enjoying her third year at Cycle Caraпb with her cycling hubby. In the center of it all was the former-pro Kevin Livingston. One of the most down-to-earth people I have met, Kevin entertained us all. A guy who rode with both Armstrong and Ullrich, Kevin has some great stories.

This is the kind of winter scenery I could get used to.

To The RIDING
The next morning—like most mornings that week—started with the massive breakfast buffet. After several rounds of espresso and a couple of plates of food, it was time to ride. About 15 of us gathered at the Workshop where we found our water bottles filled and tires pumped up.

Carol and I had to figure out which group we were riding with. Daily rides were divided into three groups based on speed and difficulty. I naturally overestimated my abilities and went with the fast group while Carol underestimated hers and went with the slow group. By the end of the week, we would end up riding together in the middle group.

Most of the week’s rides were based on Grande-Terre where a majority of the island’s road cycling takes place. The rides typically started with a nice warm up on the flat coastal roads before heading inland to take on the steep 400-foot hills of Les Grands Fonds. Here, if the hills didn’t totally humble you, some skinny local cyclist would by cruising by you with a big smile and a “bonjour”.

That was one unexpected bonus: the amazing popularity of cycling in Guadeloupe. Every day, groups of local cyclists rolled along in tight pace lines. Some had Guadeloupian-style team cars—rusty old Toyota station wagons. Even the motorists were enthusiastic. One morning, a car full of older ladies drove by Carol pounding on their car doors yelling “Allez fille!” (French for “You go girl!”). 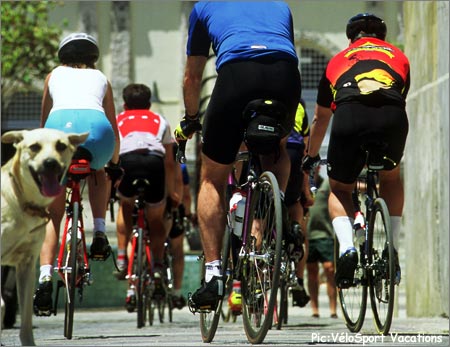 All the locals — even the dogs — love cyclists.

And Then The Aprйs-Ride
Post-ride, we usually went for a poolside panini before heading to the beach for a recovery nap. Later, we would head back to the Workshop—which was transformed into the HandleBar Cafй. There guide Kathy Gutowsky and Jean-Luc were always serving up espresso or rum shots depending on your needs. And you could count on Kevin to jump in on a round of croquette. It was a routine I could get used to.

One of the week’s highlights was a day of cycling, eating, and swimming on the nearby island Marie-Galante. VйloSport chartered a private catamaran that took us southeast from Saint-Franзois to the port town of Saint-Louis. The ride around the island stuck primarily to the coastal road, keeping us in full view of the blue-green Caribbean. Marie-Galante is a rural island untouched by mass tourism and cars were few and far between.

After the ride and a dip in the ocean, we sat down to a lunch of rice and beans, swordfish colombo, homemade coconut sorbet and ti-punch. Fat and happy, we boarded our cat and headed back to Guadeloupe. As I watched the sun set on the Caribbean, I thought back to that indoor roller workout so many glorious miles ago. I could hardly wait until next winter.

Heading back to Guadeloupe after an incredible day of cycling on
Marie-Galante.

How to Get to Paradise
Cycle Caraпb is open weekly from February 27 to March 27, 2005 and welcomes cyclist of all skills and any non-cycling friends or family members. A seven-night stay—that includes all accommodations, daily full breakfast buffets, all dinners and airport transfers—is $3095 per person for cyclists and $2195 for non-cyclists (double occupancy, extra days, single supplements are not included.) Children ages 3 – 11 are $195 and children under 3 are free. Professional-quality Fuji Provence road bikes are available for rent in advance for $135 per week.