When it comes to winter training, most racers either hang up their wheels for a few months, turn to cyclo-cross as a way to keep fit, or fuel up (read fatten-up) in style by consuming whole chocolate cakes and gallons of hot tea. When the snow and winter gales disappear and the crocuses start to show through, on goes the cold-weather gear and the long slog to shed the pounds and re-gain that easily lost fitness begins.

Many riders have begun turning to training camps that commence as early as January in warmer areas of the USA and Europe such as California, or around the Catalonia area of eastern Spain. However, there is a new venue slightly further afield that riders could consider in a location that most people would not usually think of as a destination for elite cycling – Thailand. 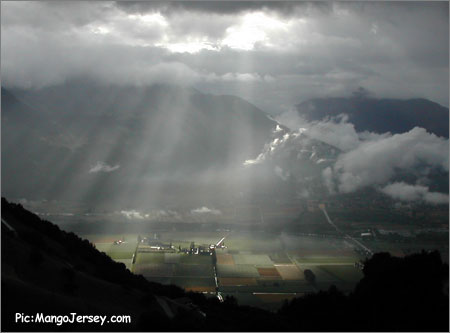 A great climate and all types of riding terrain can be found in Thailand.

We spoke to Tom Hooper, road-rider and Marketing Manager for MangoJersey ( www.mangojersey.com), a company specializing in road cycling training camps in Chiang Mai in Northern Thailand. Hooper informed us that Chiang Mai has similar seasonal patterns to the USA and Europe (due to its Northern geographic location within the country), but that the average temperatures were much higher. 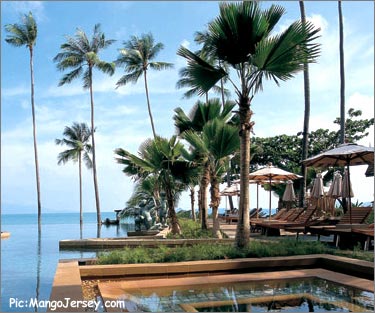 A great climate and all types of riding terrain can be found in Thailand.

For instance, in December through until March, the night-time temperature might get down to 59F (15C), and the daytime temperature would be a consistent 77F (25), with low humidity, almost no rain and light winds (try riding in Majorca in February !!). Hooper reckons this is ideal training weather and this, coupled with the terrain in Chiang Mai is what is attracting more and more cyclists to try traveling to this unique destination.

Hooper says MangoJersey offers something that no other training camp he has seen can offer – one-on-one coaching by an Olympic Coach for all participants in its camps. He also says that, unlike other camps, all rides are accompanied by ride leaders as well as by a following vehicle. 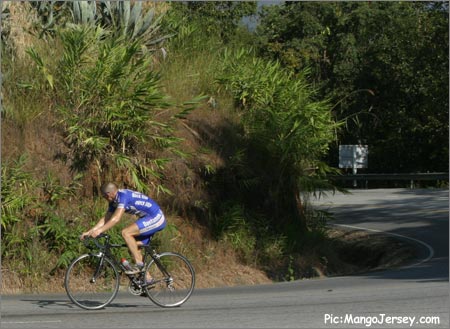 We asked Hooper to give us a little more insight into the cycling scene in Thailand:
“There is a lot of support for road-racing in Thailand right now, and this can be seen from the recent introduction of the Tour of Siam, a UCI 2.2 race that it is hoped will rival the Tour de Langkawi within 5 years. There are a lot of road races here, 4 major stage races this year, and several European and Australian Elite Amateur teams participate in these, as well as the regional Asian teams. Racing is fast, Asians like to attack……..”

Hooper explained that MangoJersey organizes training camps to coincide with the Tour of Siam, which in 2006 runs from 15th to 21st January. Teams are invited to arrive early and get in some serious training in the mountains around Chiang Mai – some of which rise to 8,500 feet (2,600m). “This year we looked after members of the Danish National team, who held the yellow jersey for a couple of days and ended up with a rider in fourth place overall” remarked Hooper.

MangoJersey camps coincide with the Tour of Siam.

When questioned about their “Olympic Coach”, Hooper was emphatic “We are lucky to have John Hardaker, who coached the Australian Olympic road squad for the Moscow Olympics…” John was also a successful National and State pursuit champion himself. He started the well known Australian Sutton brothers on their careers, Gary rode in the tour de France and Shane is now the head coach of British Cycling. John is currently working with a number of Thai and Foreign riders. One of our riders won a stage and came second overall in the Tour of Thailand last year.”

Thailand is an undiscovered – and unexpected paradise for cyclists.

And What About Thailand Itself ?
“Thailand is an amazing country, full of cultural diversity, great food, lovely people – so much to see. Where else in the world can you train and regularly come across elephants in the wild!!. Thailand has some bad press, and the Tsunami was a major setback for the Tourism industry (1000 miles away from Chiang Mai), but what most people do not know is quite how advanced the infrastructure is here. The roads are top-class, hospitals are amongst the best in the world, there’s really nothing to worry about traveling here, it’s very safe. I have a friend who regularly rides his road bike in Bangkok, and he says that he’s never had an incident with a Thai road user. Go to the USA, UK, or anywhere else in the West for that matter, and it’s a different story”

So how can we experience a MangoJersey training camp?
“Go to our website www.mangojersey.com and take a look at what we do.”

As a parting shot, Hooper laments “…I thought I knew how to train, but really I didn’t. It was only by following the practices that Coach lays down that I really got it. And to do it in the most beautiful place I’ve ever been really makes it all worth-while – try it, you’ll see!”