PEZ-Fan and noted San Francisco chef Thom Fox recently took his first cycling trip to Europe. Good thing for us he chose Girona Spain as his base, and even better that he chronicled his experiences traveling with his bike – and riding in the area. We should all do this… soon.

As a professional chef I’m always looking for an excuse to visit Europe, visiting markets, cooking and exploring the local cuisine. So when the opportunity to rent a house near Girona, Spain came along I jumped at the opportunity. And what better way to try my hand at traveling with my bike and get some first class riding in too. Here was a chance to ride in the foothills of the Pyrenees, bomb along the Costa Brava, maybe cruise with a gruppetto of pro’s on a training ride. So arrangements were made, tickets bought, ground transportation secured. 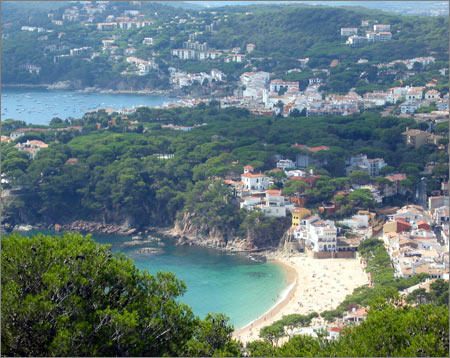 Just imagine yourself riding here… you can do it!

How to take the bike?
Which brand case to use? What to take? Tools? Extra tires, tubes, sports bars, drink powders? Hmmm. I decided I needed some help here. So I asked around and did some research. I was concerned about packing too much or worse, too little. With the current level of air travel security what would I encounter once I arrived at the airport? Just how difficult is it to lug around one of those cases when it’s loaded up? Here’s what I learned… 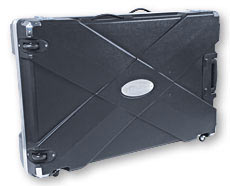 The Sidewinder by Serfas offers plenty of security and enough wheels to roll it through any airport.

The Pack Job
For starters, invest or borrow a good quality case. I opted for a Serfas Sidewinder Transport Case. This one has wheels on one side and couple of handles that let you roll it along beside you. And it has a pull out handle that locks on the long side with wheels on the other that let you pull it behind you like a roll along suitcase: very handy. When I purchased mine from my favorite bike shop, they gave me tips on packing and threw in a set of fork and rear stay braces – be sure you use them to keep forks and stays from getting tweaked (or worse) in transit.

Essential Advice
Don’t wait until the night before (or worse the day of) to pack the bike in the case! ‘Practice makes perfect’ isn’t a mantra for nothing. Practice doing the tear down and build up without a stand. Mark the seat post and bar positions, take a small tape measure if you’re a fanatic about it like I am. Clean your rig and make sure it’s working the way you want it. This can save you lots of headache and frustration on the road when you get there. My bike was a medium sized Cinelli compact aluminum w/carbon fork and Campagnolo Nuetron wheels so it seemed I wouldn’t need to do any headstands to get it all in the case. 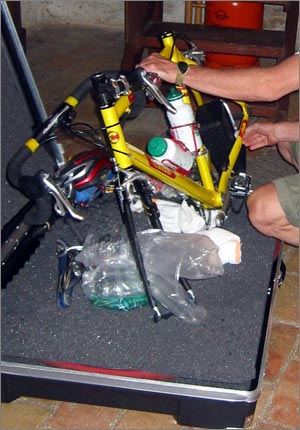 Practice packing for an easy transition when you arrive.

For most rigs I think you’ll need only three allen wrenches. One for the pedals, one for the rear derailleur hanger, and another for the bars and seat post. I taped mine to the seat post/frame, but you can also pack them into a small saddle bag to keep ‘emorganized, and secure so they don’t scratch your bike in transit.

Pack ‘Er Up!
Loading your bike and gear into the box is pretty easy – the three big chunks of foam sandwich you bike in nicely. First in goes a layer of foam, then wheels (skewers removed), another layer of foam then frame, bars and rear derailleur hanger removed, chain on, left the cables intact. Pedals off. Seat and post off together. Then cap it all with the 3rd piece of foam and you’re almost ready to close it up. 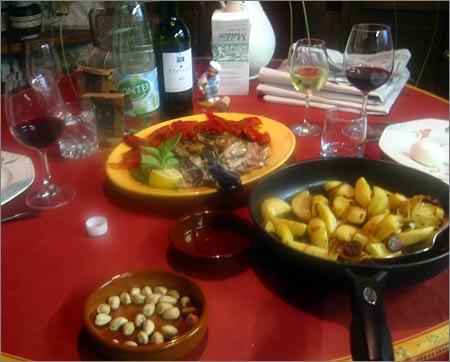 Forget about McFried anything – the regional cuisine is pretty much all gourmet.

There’s lots of empty space around the frame so you can easily pack in odds and ends; tools, bibs, jersey, bottles, sports bars, even your helmet can be squeezed in a corner too. Extra tubes and tires (I took four tubes and two tires), no problem. However, leave those little CO2 cartridges at home. They aren’t allowed either on carry on or in checked baggage. Pack the nozzle because you can buy the cartridges when you get there. I was even able to add the wife’s yoga mat and support block (big points here). And it all weighed under the 50lb mark. 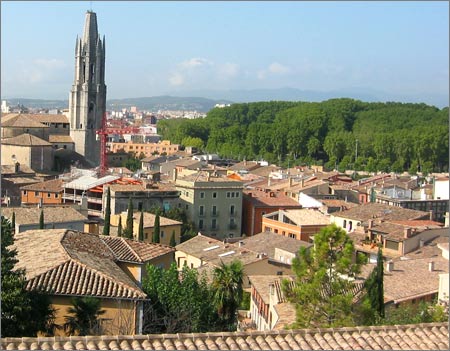 Girona Spain has become the ‘home away from home’ for many North American pros.

Getting There
Generally no one will bat an eye when you roll up to the ticket counter to check your baggage. But get there early. Your bike case may be subject to being opened and searched. Mine was and I happened to walk by the area while it was done! Beth, the cheery TSA staffer said not to worry, she would handle it all with care and pack it back up right… at some point it’s all a leap of faith anyway. (And by the way she did!)

Arrival
Everything made it safely to Barcelona with the bike arriving right there with us (despite all the horror stories of lost baggage). I quickly discovered that having an easily rolling case really makes moving through airports much easier. Most European cabs are not big enough to fit the bike case, you will be forced to find a small mini van taxi.

Upon arrival at our hotel the desk clerk happily offered to store the bike case in a side room so we would not have to schlep it up to the fourth floor. And given how small most European hotel rooms and elevators are this can be essential, so a bit of fore thought here is advised. Be sure that the hotel you’ve chose can accommodate a bicycle case somewhere safe, outside of your room.

Rental Car
I’d arranged for a mid-sized sedan, giving us room for one bike case and two modest suitcases. However, if you are traveling with more than one bike, get a mini-van. [Or rent a decent sized hatchback or small station wagon. I rented a Volvo at the Giro that easily held two bike cases and suitcases – ed.]. 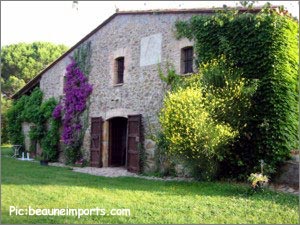 Once we arrived at the house in Girona, Mas Sitjo,(see BeauneImports) it was time to unpack and re-assemble. The time spent practicing really pays off. I’m practically a pro at this by now.

A couple of hitches that I can see here though. Tire pressure. Since you can’t bring those CO2 canisters quick tire fillers you need a good quality frame pump. As it was the house where we stayed is owned by a cyclist who had a floor pump with a pressure gauge. In less than half an hour and before dinner was ready I was set to jet.

In The Saddle
Riding around Girona is spectacular. The roads are very smooth, the drivers are courteous and really seem to tolerate cyclists with out the usual aggressive honking and zooming we experience in the States. The first day I just tooled about easily for a few hours after checking the maps for a route. Another bit of advice: Invest in a couple of good maps. Michelin makes some good regional maps that you’ll only find once you are in the area where you are traveling. Even online searches didn’t give me what I was looking for. So once there it’s worth looking around for them. The smaller roads are left off many of the larger maps so the regional ones are the hot ticket. Also, change your cycle computer over to register in kilometers. It’ll help in keeping track of where you are relative to the maps and road signs.

Research on riding in the area turned up enough references of names of villages and such that it was easy to put together some killer rides. And forget that break of dawn ride routine when you hit Espana. No one hits the saddle before 9am with everyone I saw riding was out after 10am. How civilized is that? 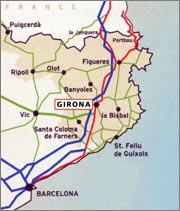 Girona is conveniently located in the northeast corner of Spain. Map source:www.bikecat.com
Favorite rides included:
• The Sant Hilari Sacalm loop. 4 hours plus hours with a climb of 28km of probably no more than 6 percent but snakes up through a remote forested valley. And the decent off the other side is equally long and twisty, down to Santa Coloma then levels out and rolls back to town.
• Les Planes. Go north on the G531 thru Sant Gregori up to Les Planes. Again, tarmac as smooth as a baby’s behind, winding up and back through a mountain valley. This seems to be a favorite of many of the pros in the area as I encountered several groupettos along the way.

I talked my way onto a ride with the crew from BikeCat run by a couple of young fellows from Catalunya who started their own tour/bike training camp business just this year. They offer eight day ride camps based in Girona, these guys got it goin’ on, with well planned routes on back road routes you’d never find. 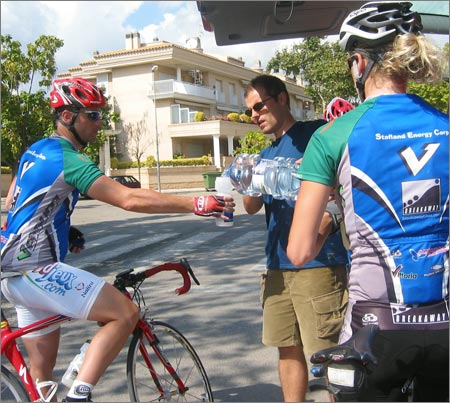 Bernat and the BikeCat support van kept us rolling.

With their support van following the whole way just in case you flat or have a mechanical, and they have total knowledge of the land, culture and cuisine. Jaume used to race in the USA on the east coast so he and Bernat (also a trained mechanic) are very serious about biking. Their camps specific to each group. Included in the group ride that day were women’s US National Critireum champion Theresa Cliff-Ryan, her husband Gary (a track sprint racer) and none other than Freddie Rodriguez. In fact this was the first annual Fast Freddie – BikeCat training camp. As if that weren’t enough we had a couple of guys from the Astana and the TIAA-CREF teams roll through but luckily the pace was humane enough for me. 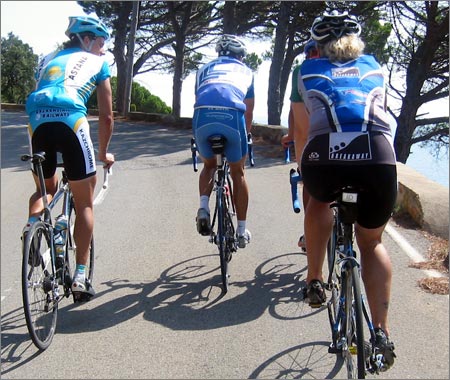 Nothing like 5 hours of spinning along narrow Spanish farm roads and rolling up and down the Costa Brava to put you in a state of cycling nirvana.

Back To Reality
After nearly a week of shameless indulgence it was time to check back into reality. The return leg of the trip was as seamless as the trip over. Careful packing the night before, arriving early at the airport, and patience with all the latest flying restrictions let us arrive home, safe, sound and looking forward to next year’s trip.

Travel Notes – Some added advice from PEZ-Readers:
– Co2 Cartridges: One of the things I found out the hard way on my first trip to europe with a bike, is that it’s easy to find CO2 cartridges, but NOT the unthreaded ones. Zefal threaded cartridges were easy to come by, but if you have one of the little trigger cartridge holders like the “Ultraflate” you won’t find unthreaded cartridges anywhere (at least not in France and I never did figure out what the french word for “unthreaded” was).
– Arthur 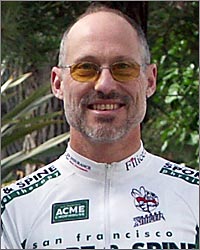 Thom Fox is a professional chef living and working in San Francisco, California. He may be reached at [email protected].