Mixing a tropical vacation with some riding can be a challenge, but on the Caribbean island of Curacao, the roads are good, the beaches just right, and if you take in the Amstel Curacao Race – you can even roll against some top Euro pros.

Words and Photos by Pat Lyons
As you move to the front of the peloton rolling through the neutral zone, you pass a smiling Paolo Savoldelli in the Maglia Rosa from last year’s Giro win. You slide into a spot in the second behind Erik Dekker and Michael Boogerd of Rabobank. You stretch your neck a bit and see the World Champion Tom Boonen competing in his first race wearing the Rainbow jersey. As the field flashes along the coastal road, you glimpse to the left to see the jewel blue waters of the Caribbean crashing on to the white sandy beach. A quick look to the right and you see the sidewalk packed with screaming fans cheering you on. You ask yourself, is this a dream? 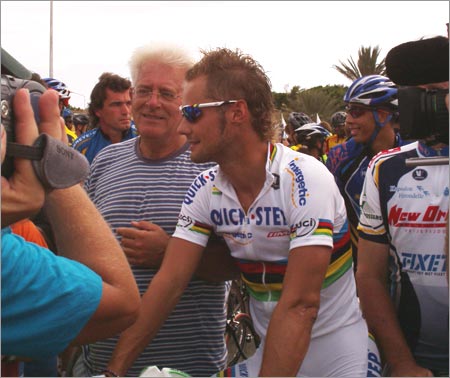 Want a chance to actually ‘race’ with some top pros? The Amstel Curacao race is the place for you.

Nope. It’s the Amstel Curacao Race where the average Joe club rider has the chance to spend a week in the Caribbean and actually compete in a race with star European pros. I had found out more about the race after meeting with the race’s director, who’s also a former Ghent-Wevelgem & Tour de France stage winner – Leo Van Vliet.

Leo explained “Each year Amstel hosts/promotes a race in Curacao with some of the big names in cycling. It gives the riders a holiday of sorts but also lets the fans meet and interact with the riders in a relaxed atmosphere that is impossible at the high-pressured events during the season. It’s quite a unique experience. You should come down and take part.”

After a few phone calls and emails with Larry Bennett, marketing director of Duvel USA, an arrangement was made. Teammate Robert Gottlieb and I were off to Curacao to compete as Team Duvel USA. 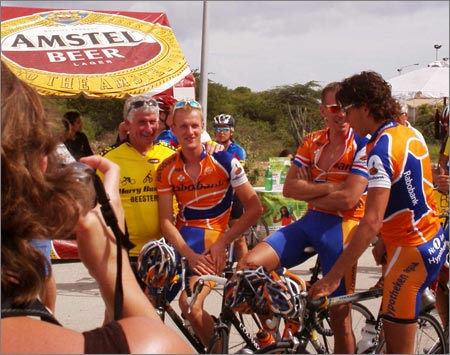 The weather is great, the beer is Amstel, and the pros are happy to pose for pics.

Curacao is located off the Northern coast of Venezuela next to Aruba. The weather is perfect mid 80’s bright sunshine and plenty of beaches and rural roads to explore. Our accommodations were first class at the Lion’s Dive Hotel & resort, which also served as the race Headquarters.

During the drive from Hato Airport we were amazed to see buildings and shop windows plastered with posters advertising the upcoming race and Tom Boonen’s participation. We asked the driver “How big a deal is the Race?” “Biggest thing on the island.” After hearing that I was wondering if this was such a good idea.

The week leading up to the race was perfect. Our breakfast table for the week was next to Savoldelli and his family. Each morning was started by a polite “Buon Giorno” from ‘la familia Savoldelli’. After that 3-4 hours on the bike checking out the race course and the local roads. Then lunch and we would hit the beach. This was the Euro-pro rock star life.

Full schedules of activities were planned giving the fans the opportunity to meet and socialize with their cycling heroes. Events included a volleyball tournament, BBQ, and a mountain bike ride. But the biggest event was the After Party sponsored by De Telegraphe Newspaper to celebrate the last race of the season. 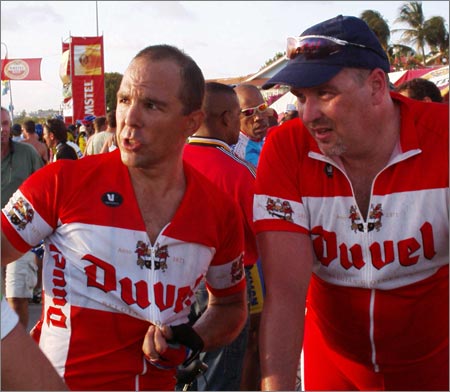 Bob and Pat – by day club racers like the rest of us – but this week they’re mixing it up with the big boys.

Race day dawned as another day in paradise. At the 2pm start the temperature hovered at a humid 92 degrees. The start area was packed with local riders and fans all positioning to get a photo taken with their heroes. Much to our surprise the Dutch and Belgians met us with shouts of “Duvel” and “Red Devils” in the crowd. I have to admit it was pretty cool having our pictures taken and being mentioned by the announcer at the start.

We rolled out and into the neutral zone into downtown Willemstad. We sailed along the climb up to the Queens Bridge over the harbor. The pros kept safely at the front, with the pace quick enough to keep the weaker riders at the back. I was brought down in the first crash of the day caused by a punctured tire that split the field. My teammate Bob was fortunate enough to make the split by being on Dekker’s wheel.

I spent the rest of the day chasing from one group to the next.

The pros took it easy after the split so Bob launched an attack by going off the front only to be chased down by Boonen himself.

At the end of the 80km, the race was won solo by World Champion Tom Boonen, followed by Savoldelli and Peter Wenning. Bob finished an amazing 18th to which Savoldelli commented, “You were very strong today”. I wobbled in at 60th place, still in the top half of the field.

Bob said his best moment was when Boonen caught him and gave him a blank stare as to say “Enough from you.”

For me it was climbing the Grote Berg, the largest climb of the day, when I led a small group of riders minutes down through a narrow corridor of screaming spectators packed along the roadside approaching the summit. That was the coolest-Euro tour moment I’ve ever experienced.

The average fan can’t step into the batter’s box and fax a major league fastball from Randy Johnson, or catch a pass from Bret Farve during an NFL game. But you can go to Curacao and for a few moments live the Euro pro dream.

The Amstel Curacao race is scheduled for Saturday November 4th, 2006.