Guests of Velo Classic Tours’ September trip to Tuscany will have something more to talk about than just your run-of-the-mill Tuscan landscape of endless rolling hills covered in ripened grapevines, ancient hill towns, and exceptional food and wine… they’ll also be riding with the women’s world #1 racer – Oenone Wood. Turns out Oenone can’t wait for Fall…

The Target: Oenone Wood, Women’s world number one cyclist.
The Objective: Meet in person our invited guest for our Tour of Tuscany.
The Location: Somewhere in Holland. It’s flat and it’s cold.

“OK, I think it’s down this block, we’re looking for number 8”, I said, as we slowly made our way through the identical rows of housing. “1,3,5,7,9…..what the….”? I mumbled as we began to look like completely lost tourists. Ready to retreat to our car and regroup, I suddenly spotted an Equipe Nьrnberger Versicherung team car. We had found #8.

Velo Classic guests will enjoy many views like this while riding with Oenone Wood Sept. 30 – Oct 9, 2006

What began as an idea in New York, transpired through emails to London, developed through late night phone calls and emails between Australia and California, and following a 2-1/2 hour drive from Belgium between our Classics tours, was finally going to culminate in person with our VIP- Oenone Wood, the number one rider in the world of women’s professional racing.

Oenone greeted us with a big smile and a warm welcome. Quickly in out of the cold, we relax in the living room of her Aunt and Uncle’s house, listening to some hip music, talking about the Tour of Flanders, her Commonwealth Games medals and her upcoming races. Having lived here for a short while during her high schooling, Oenone returns annually for a block of spring training between the Ronde van Drenthe and Fleche Wallonne.

Oenone: The first week of training after coming from Australia was pretty awful particularly as it was much colder this year than usual. The last few days though have been considerably warmer so I am adjusting. The season so far has had mixed results, but the commonwealth games were the main focus early season and that went really well for me. [ed note: Gold in the Time Trial, Silver in the Road Race] I am looking forward to the next part of the season as we are coming into the races that I really enjoy. 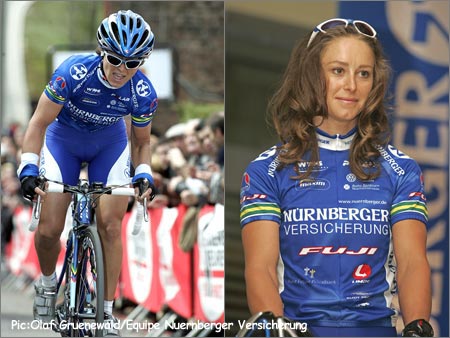 VCT: Enjoy racing? What is it about racing you actually enjoy?

Oenone: The last 5km of each race, that’s usually the most exciting. I like the speed and adrenalin!

VCT: What are some things that you dislike?

Oenone: Trying to avoid crashes in the wet on small roads and when I’m staying in a 1 star hotel in France in the middle of the tour de lБude eating soggy pasta.

VCT: That does not sound too enjoyable… So is there anything you would change today regarding women’s professional racing?

Oenone: In general I think the UCI manages women’s racing fairly well. I would probably try to have more races that coincide with big men’s races. For example, reinvent the women’s tour de France and more races like Fleche Wallone and Flanders.

VCT: Speaking of Fleche Wallonne, a race well suited to your powerful riding style, how are you feeling about the World Cup for this year?

Oenone: I have felt in the last two seasons that riding in the world cup leader’s jersey meant that I was always riding defensively. I think it’s time for a change. Whether I contend for the overall will depend the point situation in August, but it is not a main goal.

The riding in Tuscany is … amazing.

VCT: Hmm. August. September. October. That’s obviously a long season, and a long way from Australia, what helps with the motivation?

Oenone: I think I have a fairly privileged life. If I’m ever not feeling so great I remind myself that I get to ride my bike and travel through Europe for a living.

VCT: Now there’s a refreshingly honest and different take on the whole pro thing! Any pre-race superstitions or rituals?

Oenone: I’m a bit particular about socks and having everything very neatly arrange in my bag.

VCT: (note to self: pack extra Velo Classic socks for her for the trip!) After a successful race, any traditions or celebrations we should know about?

Oenone: It’s a bit dull but most of the time it’s straight in the car and onto the next race. Most celebrating is probably done in retrospect.

VCT: After a tough day, any consolations or pick me ups?

Oenone: A hot shower and a massage always helps.

The famous Ponte Vecchio in Florence – you’re going there!

VCT: So who’s your biggest nemesis?

Oenone: I have had a running battle with Mirjam Melchers, who is always tough to beat. [Tour of Flanders winner the past 2 years ed.] and I wonder what Nicole Cooke has been up to.”

~ A wry smile breaks across her face as she gets up to change the CD. Don’t worry, I joke, we’ll take care of her….maybe an inopportune flat tire, some tacks on the road……

VCT: You came into racing through the AIS/Australian National Team- how did you get involved?

Oenone: I was a cadet in the air force and was recruited into cycling by one of my physical trainers. From that point I got a scholarship from my state academy and then moved onto the AIS team.

~ Three years later! …her physical trainer must be some kind of oracle! With a host of victories in her home country, including multiple national titles, she won the 2004 world cup, and signed a pro contract with the German based Nurnberger team. She defended her World Cup title last year, and finished with a bronze medal at the World Championships in Madrid. Based in Germany during the season now, she is looking forward to returning to Italy, a country she adores.

The trip features 2 nights in the classic hill town of Siena.

Riding In Tuscany …There’s An idea! 10 Days Under A Tuscan Sun
Oenone: Italy is to date my favorite place to train, but I have very rarely had the chance to train in Tuscany. The roads are incredible and the cycling culture is pretty fun. Riding in an Australian team jersey usually gets cheers when you ride through small villages. It sounds like a great way to spend 10 days. I think a trip like this definitely has the potential to get women hooked on cycling.

~ Ah, yes, the reason for our visit. We invited Oenone to be our guest on our Tuscany tour this fall. Scheduled for September 30 to October 9th, the tour starts in the Florentine hill town of Fiesole. From here, the tour heads southward through the Pratomagno hills to Arezzo, before crossing into Pienza and the rich wine region famous for its Brunello di Montalcino. The tour then heads north to Siena, before taking in the classic hill towns of Volterra and San Gimignano.

Oenone: I’ve had a look at the schedule for the tour and it fits in with my season well, so I am very excited to come along for the whole tour. I know some of the areas from the Giro delle Donne, but some of it will be new, so it will be a good mix. The climb up to Volterra is always pretty challenging when we race it, so it will be good to have a different perspective of it. I’m really looking forward to it.

~ The trip, as with all itineraries with Vйlo Classic Tours, features what is referred to as “our 3 pillars – serious cycling, sublime culture, and exemplary service.” Guests are treated to first class accommodations, including a converted monastery, two Villas, and a new 4-star hotel owned and operated by our family in Volterra. The trip will also feature gourmet dining – another staple with Vйlo Classic Tours – as well as a private wine tasting and cultural excursions to see some of the most renowned artwork and museums, as well as some hidden gems off the beaten path.

Oenone: “This reminds me a lot of how a pro team is structured – the hotels, food, logistics, services all being first class” – she says while devouring our brochure, “all that’s missing is the craziness of racing – it will be fun to enjoy the countryside for a change and ride with other cyclists. We used to ride in the local Gran Fondos as training. The chaos that always seems to happen before big events is my favorite part of Italian culture. I love watching a large group of Italian men organizing something – it’s hilarious, but eventually someone makes a decision.

~ Maybe I should invite her to a family function?

We decide our time is up, and agree to meet at Fleche Wallonne the following week. Fast-forward to a warm and sunny morning on the top of the Mur de Huy, Oenone greets our group- relaxed, enthusiastic, posing for pictures and chatting about the race. A she heads for the start, I remind her to avoid the strategically placed roadside tacks. “Right side or left side?” she jokes, as she bids farewell. 3 hours and 106 kilometers later, our group is bent over the rails cheering her on as she is the first to appear from the lower slopes of the Mur de Huy. It’s looking good for victory, until about 100 meters to go when her efforts get the best of her. She finishes 4th on the day.

Speaking later in the week, I apologize for the tacks not doing their job, and perhaps I’ll need to be more devious next time. “I don’t think the tacks were the problem. I think I started a little bit early and didn’t I feel it! I enjoyed the race though and I think I’d rather have a go at winning than waiting too long and getting the same result.” There’s that part about enjoying racing again! With the World Championships in Salzburg, Austria a major goal for her season, and coming one week before joining us in Italy…. I don’t want to jinx it!