Provence has often been called the “French Tuscany” – complete with rolling green hills, some big climbs, sumptuous food, abundant wine, and endless kms of winding roads – it’s a sure bet for a great week of cycling. Throw in the Dauphine, and you’re pretty close to nirvana… 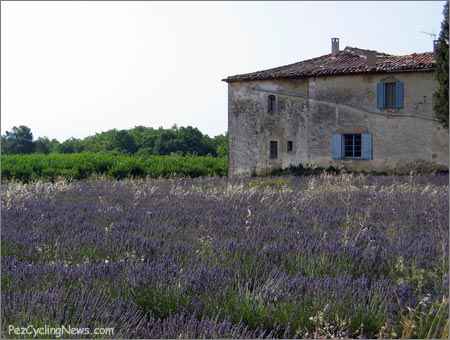 A couple of weeks ago, PEZ called me up with an unmissable assignment – get over to France to check out the Dauphinй Libйrй, and ride some of those baking French roads alongside the good folks of VйloSport Vacations.

No problem making the decision, so I headed for the prologue in Megeve, then noodled my way from the Alps to Provence. Some French people have a reputation for being less than 100% helpful, but the public transport network is pretty fine. 3 bus rides, 3 train rides, no near misses and approximately 12 hours later I rolled into camp at Malaucиne.

Kathy Gutowsky (above), who runs the show with her husband, Chris, greeted me and briefed me with all the info I’d need for the week ahead. Unfortunately, everything went into a sort of white-out as my fried brain tried to deal with the words: “You missed the shakedown ride, so you’ll be starting off with a 100km ride tomorrow.” Up a climb of 22km through a gorge. In temperatures in the high 80s. Ouch.

If you choose to use on of their bikes, you’ll get your name on it like the pros.

Next morning, Chris guided us out and around some beautiful back roads – it set the pattern for the week as we avoided the busiest highways, enjoyed coasting around checking out the scenery, and getting the kilometres in. Even the gorge climb turned out OK considering I’d left my climbing legs in a bus station the day before.

We took advantage of the variety and beauty of the area around our base in Malaucenи because the team has built up impressive knowledge of the area – we took shortcuts to avoid traffic, saw every great view and missed every pothole.

You know you’re in Provence when… all the windows are blue.

I opted to hang out with the least quick group. An ideal choice as the folks were all really nice and mellow. It also meant we had maximum time to chill out and replenish supplies at the feed stop mid-ride.

Could it be true… are you actually living a Lifestyle of The Rich & Famous?

Another massive advantage of the week was that we were based in the same hotel the whole time, so no hassles moving around. It was great just to chill out after a ride, then head out for dinner with new-found friends.

Over the week, I racked up about 350kms – pretty good for a pasty-faced Brit in 90° temperatures – guided by Chris and Kathy, along with super-cool mechanics/guides Mike Ley and Jean-Luc Serriere.

The central location of the hotel meant no transfers, and access to an endless choice of rides.

The social side of the trip was as important as the cycling itself, and there were a couple of dinners out where the whole group and staff dined together. We had a fantastic meal in the garden of a Provenзal farmhouse owned by Jackie, a friend of Chris and Kathy, who also helps out on the tours.

Jackie and her family put on a huge spread of home-produced food. And as we sat there enjoying it, a car pulls up, and out jump Frankie Andreu and Jonathan Vaughters to join us for dinner!

Just about managing not to look totally starstruck, I managed a couple of words with both of them – super guys, and both looked like they could still do a job in the Alps if US Postal or anyone else came calling.

Frankie Andreu & Jonathon Vaughters joined us for dinner one evening.

A great week thanks to VйloSport Vacations, packed with highlights. One of the biggest was an assault on the legendary Mont Ventoux – read my sweatsoaked lactic acid trip here: PEZ Ride Ventoux.

Prices for a week of Ride Provence start at $1395 for adult cyclists ($945 for non-cyclists), and include 7 nights accommodations, 7 breakfasts and 7 dinners, plus lots of supported rides. They also offer trips to the Tour de France, Classic Climbs tours in the Pyrйnйes and the Alps, and a cycling resort in Guadeloupe called Cycle Caraпb.