I know I’m preaching to the converted, but if you take one vacation this year, go see Lance in France. And why not do it with a former TDF stage winner Davis Phinney, and former yellow jersey Alex Stieda? Both have led cycling tours for the past 10 years, and know how to really see “le Grande Boucle”. 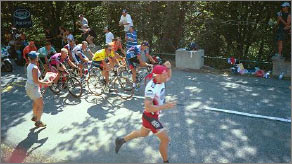 Riding L’Etape Du Tour With Guys Who Know
If you’ve ever wondered what it’s like riding an actual stage of the Tour route, complete with fans, town celebrations, and of course picturesque roads, then “l’Etape du Tour” is for you. The Etape du Tour is long-known in Europe as the cycling highlight of the year. It’s a race for amateurs like you and me to ride an actual stage of the Tour de France, just a couple of days before the peloton comes through – closed roads, police escort, Mavic support – it’s the real thing. Add to that the fact that the villages along the route come out to cheer and take a holiday and this is about as close as it gets to the real thing. 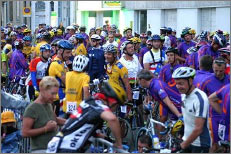 HighGear Travel includes riding the Etape du Tour as one of the highlights of their Tour de France trips. Another highlight for HighGear guests are the company’s owners and guides – Tour stage winner Davis Phinney, Yellow Jersey holder Alex Stieda and Olympian Paul Wylie. Both Phinney and Stieda have led cycling tours around the world for the past decade.

HighGear’s other partner, Jon McNeill, talked to us about how they’re own approach to cycling tours.

“Out of 8000 cyclists at the starting line last year, only 250 were from North America – we’re aiming to change that,” says McNeill.

This year’s Etape will take place on stage 10 – the longest stage of the Tour from Limoges to St. Flour. “Standing at the starting line for the past several years, I’ve said to myself, ‘the pros do this for 20 days –I can do this for one.’ Each time I cross the finish line saying, ‘I don’t know how they do this’,” says McNeill of last year’s 123 mile stage with over 12,000 feet of climbing.

“On one hand, it’s indescribable to experience the Tour in person. Add riding an actual stage and it’s over the top.”

The Benefits of Riding with Phinney and Stieda
HighGear’s cycling tours are led by two guys who know the Tour from their days on the 7-11 team. Phinney is still America’s winningest cyclist and Stieda combines over 100 wins with the honor of being the first North American to hold the Yellow Jersey. 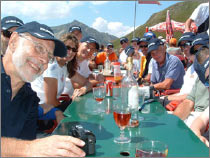 “We really enjoy working with small groups of enthusiast riders. Whether it’s helping with handling skills, climbing, or just explaining the tactics of the race,” says Phinney. “Add to that, we’re based in Europe most of the year. We know the terrain and the culture.”

Hotels are hand-picked, often with the experience of staying in them so many times that the owners treat HighGear’s guests like old friends. “You get great hospitality from the small inns we use in France – it’s almost like you’re accepted into their family for a week,” says Wylie.

Phinney and Stieda bring HighGear’s guests a secret weapon – a former team Motorola soigneur. “After riding all day, there’s nothing like a massage from a guy who’s helped the worlds best,” said Wylie.

If that weren’t enough, HighGear has an elite coach on staff to develop personalized training and diet plans for HighGear’s guests. “Although the trip is in July. Our relationship starts months earlier and lasts throughout the year,” says McNeill. 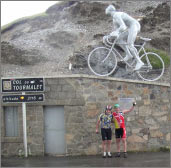 Hand-picked Routes – Ride Every Day
In addition to the Etape, HighGear’s guests ride Tour stage routes each day. Daily rides of 30, 60 and 90 miles are carefully chosen and guests ride with guides who speak the language and are skilled mechanics.

“Like the tour teams, we go and do reconnaissance on the stage routes. We try to pick the most interesting sections of the stage to ride and watch from – you’re juices definitely get flowing as you climb the famous switchbacks, see names painted on the road that have been there for decades or just stop in a pre-picked restaurant for an incredible lunch. There’s no such thing as a boring day over here,” says McNeill.

Ride With A Cause
“This year, we added the dimension of fund-raising for two reasons. We wanted to give the opportunity for guests to involve their family and friends in their ride. We’ve also been touched directly by cancer and Parkinson’s disease and we wanted our company to help make a difference,” said Wylie.

Each rider gets the full support of the Lance Armstrong Foundation or the Davis Phinney Foundation for Parkinson’s to use their Etape ride as a fundraiser.

“The guest chooses which foundation to support and we give them all the resources of both organizations to help them meet some soft targets that have been established. We’d like nothing more than to raise $75,000 this year through this one ride,” says Wylie.

But What Do The Guests Say?
“As Tyler Hamilton, Lance Armstrong and more than 100 other riders through the Pyrenees in the 16th stage of the Tour de France, I could feel their pain – sort of. I’m no pro, and Hamilton’s 24.6 mph average speed is a blistering pace compared to my snail crawl over the mountains, but on July 16, I faced
the same route that Hamilton and Armstrong rode yesterday: a 122.5-mile-long course with more than 12,000 feet of climbing

The Pyrenees are stunning, especially when you’re gasping for air, but guardrails seem not to have been a priority on their wild switchbacks. Fortunately there were spectators, who, aside from gamely cheering us
on as we crawled past, might have broken our fall. The Bagarguy brought out the best in the crowds, especially when they spotted “une fille” among the thousands of men.

L’Etape wasn’t all about pastoral glory, however. There were some folks at the front actually racing the thing. Miguel Indurain, the Spaniard who is the only person to have won five consecutive Tours de France, started the stage at the endpoint and stopped partway through, citing some misplaced priority about
celebrating his 39th birthday. The important thing is, he dropped out before I did.

The ride was finit, my legs were finit and soon a shower and dinner were finit, too. Biarritz, the city we stayed in that night, is a lovely place, but I can’t give you any details. The bed in the air-conditioned hotel room fit me much better than a leader’s yellow jersey.”

Ride and See the Tour de France
HighGear’s tours are designed for an experienced cyclist who loves riding as well as experiencing all of the benefits of the local culture, food and history.

Guests experience the Tour right alongside guys who’ve been in the race themselves. They enjoy laughs and stories over the dinner table of the inevitable off-the-beaten path experience of the day.

HighGear is offering several packages to the Tour de France 2004. Trips include transportation, lodging, meals, race entry (nearly impossible to get on your own), supported rides from 30-90 miles, van transfers, and airport pick-up and drop-offs.