France, summertime, le Tour – thousands of North Americans have already chosen this as the summer holiday of a lifetime. A lot of us choose to see it with an experienced cycling tour operator, and a lucky few go with the first North American to wear le maillot jaune – Alex Stieda. Here’s a first-hand account of the 2003 Tour from one of Alex’s guests…

“I’m taking you to the Tour de France – with Alex Stieda’s bike tour company Stieda Cycling.” I heard those words, from my brother Chris, in January. “It’s the 100th anniversary of the tour,” he added. “It’s following the old tour route, and will go through the Pyrenees. That’s where we’ll be staying.” I hung up the phone, and stared, slack jawed, at the wall. Surprise was too mild a word to describe my state. Astonished would have been a better term. 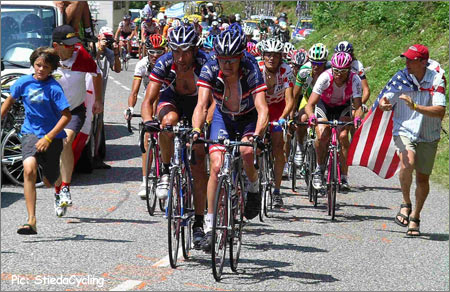 You wanna get close to the action? This shot was taken by one of Stieda’s guests at the 2004 Tour.

The Tour de France? I’d been a bike racer, in Europe, but that was 19 years ago. I hadn’t touched my road bike in years. The Pyrenees? They’re renowned for harsh grades and pitiless temperatures. Well, it was January. The race was in July and there was plenty of time to train. Besides, Alex was an old friend, and surely he wouldn’t organize anything I couldn’t handle.

But months dwindle to weeks. Children, a law practice, and landscaping have an iron grip on one’s spare time. Still, there were a few training rides, and Alex and I went to Jasper, once, for some hill training. “I think I’m ready,” I said to Alex as we drove back to Edmonton. I ask myself now: how can one person be so wrong? 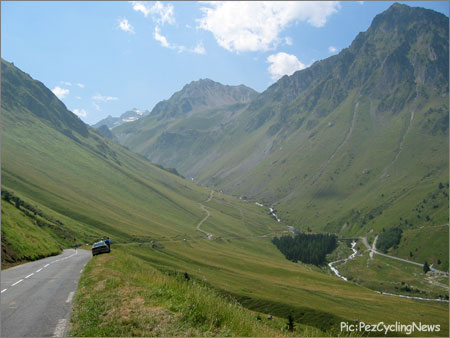 The road to the Tourmalet. You haven’t seen mountains till you’ve seen the Pyrenees.

The Pyrenees are unlike any other mountain range, and the Tour de France shatters any notion you had of major sports events. Racer or tourist, you can never be ready for your first Tour. Take the current hero, Lance Armstrong. He failed to finish his first two, and only completed one out of the first four. The Tour is a test beyond comprehension, and a spectacle to match.

In 1986, Canadian pro rider, and now Edmontonian, Alex Stieda managed to finish his first Tour, and even wore the leader’s yellow jersey for a stage. In 2003, he launched his own company www.stiedacycling.com and brought me, and 20 others, to the Pyrenees for our own Tour baptism. We would pick up the race in the venerable spa town of Bagnere de Bigorre, and finish, like the Tour, 12 days later on the Champs Elysees.

Arriving in Pau – the Gateway to the Pyrenees
Alex’s assistant, Tom Duchnych, greeted me, and my brothers Chris and Curtis, at the Pau airport. The south of France is the Gallic equivalent of the BC interior. Even in the airport parking lot the air is fragrant with cedar, and the night breeze is soft. The hotel we’re in, the Citecycle Sporthotel, is modern, but has gravelled courtyards, and a burbling river that rushes past our windows. The next morning, after a continental breakfast of pastries, fruit and cold cuts, we put the bikes together and roll out for an easy ride. We meander out of the Pyrenees to the foothills. The ride follows the Tour route for an upcoming stage- a pattern Alex sets for the trip- so that we can later watch the TV coverage, and say, “I’ve done that.”

How can you be ready for bike heaven? The locals are ready. The farm villages along the route have set out banners, painted signs on the road, and scrubbed themselves clean for the race. They’re eager to cheer the competitors, and even our peloton, outfitted in jerseys specially commissioned for the tour, gets cheered by the locals. Lush woods, deep valleys and patient motorist complete the package.

We stop, on a rolling plain, and gaze back at the Pyrenees. They rise, steep and jagged, like jumbled pyramids, out of the modest hills. There’s not a cloud in the sky, and sun is torching us.

The Pyrenees are remote, imposing and beautiful. Tomorrow will be the first tough day. We will ride a series of three passes, two of which, in the Tour classification system, are “Haute Category”: above categorization. I dismiss the warning inherent in the H.C. rating. After all, I used to be a bike racer. Okay, that was before kids, but I’m ready aren’t I?

Later that night, at the briefing held by Alex, he warns us about the passes on the menu for the next day: Col D’Aspin, Col du Tourmalet, and Luz Ardiden. They’re 700m, 1300m and 1200 m respectively. To put this in perspective, the average Canadian Rockies pass is 500m. And it’s not just the vertical gain, it’s the grade. At their worst, big Canadian passes boast an 8% grade for a few hundred metres. The grades on these three sisters range from 8% to 12%, and this vertiginous rise goes on for kilometres. In the case of the Tourmalet, 17.5km to be exact.

Our high spirited group breaks into two teams. The sensible ones who will do one pass, and the others, like me, who fancy themselves as tamers of the Pyrenees. We’ll ride them all. After all, a mountain is a mountain, n’est-ce-pas?
I am about to learn that size does matter.

That could be you baby! – right there on the Champs Elysees!

Today – the Tourmalet!
How can a day that starts so well, hurt so much? How can a place so beautiful, cause so much suffering? The next day, I am chugging, agonizingly slowly, up the Tourmalet. The sun is frying my helmetless noggin. The air is 37 degrees C, humid and still. The trees and hay fields are pumping steam into the air. The other tough guys, my brothers, John- Eric, Scotty and Al, have left me behind. I’m alone, and my bike has turned to an anchor. No, an anchor would be too light. My bike is a piano. A grand piano, that I’m wrestling up the shimmering road.

The preceding pass, the Col D’Aspin, was a breeze. Half way up D’Aspin brother Chris had said, “Don’t go too fast, it’s a long day.” I remember too late an old, and forgotten bike racing truth. Energy is like water in a glass. You pour it out too soon, and it’s gone, gone, gone. And now, I’m the empty glass. The hideous word- quit- comes to mind.

Get More Info
For the complete version of this story, contact Alex Stieda at [email protected] and he can email you the dramatic conclusion!

Or, if you simply would like information on his Tour de France Experience or Exotic Bike Camps go to his website www.stiedacycling.com .