The World Championships are returning to Verona, Italy, and SPROCKETMONKEY Cycling Tours is offering a stylish way to ride, see the racing, and enjoy the best Italy has to offer. We checked in with Aaron Ramroth to see what guests can expect on this hip tour of the Veneto region. 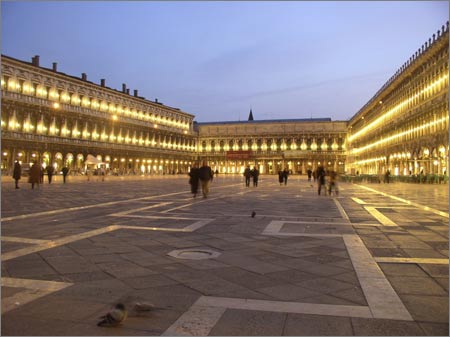 The Piazza San Marco in Venice actually floods with the tides at certain times of year.

“Our World Championship tour really shows what we mean when we promise hip tours that include riding and relaxing in style. We’ve spent a good deal of time researching the places we’ll stay and the places we’ll ride. Our clients really benefit from the fact that we live here – it makes it easier for us to find the coolest, most up-to-date routes and sites for our tours. Sure it’s a tough job, but someone’s got to do it!”, says Ramroth.

Ramroth, a former competitive cyclist, has personally ridden all the routes for his trips, and has researched the “hippest, trendiest” spots on his many trips to Italy. They make a point of taking care of the details like bike maintenance, massages and organization – as because not everyone thinks a spin through the Italian countryside is the best way to experience Europe, they also look after activities for non-cycling partners.

Venice
The tour’s first two days illustrate Ramroth’s passion for riding and relaxing in Europe in style – the founding premise of SPROCKETMONKEY.

“There’s no better way to start a great week of cycling than in one of northern Italy’s finest cities,” he says. “The rides we’ll do in this area are mainly flat to get our legs warmed up for the end of the week when we hit the hills further north in Trento. It’s always cool peddling past the magnificent Villas in the areas surrounding Venice.”

But SPROCKETMONKEY isn’t just about cycling, it’s also about style and their Championship Tour offers the latest luxury, design hotels that won’t nail your wallet. 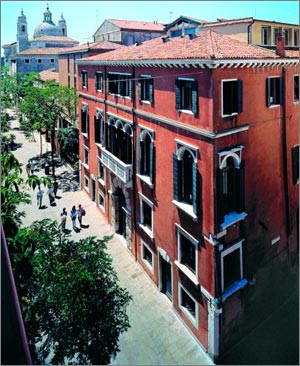 Guests will stay at the Ca’ Pisani Hotel in Venice – smack dab in the action.

“The city needs no hype, but let me tell ya, the hotels we’re staying in are two of the hippest hotels I’ve seen in Europe. We had to pick two because both limit the number of guests in order to provide more personalized service. They’re both located in the heart of Venice right off the Grand Canal near the Peggy Guggenheim Collection and they are the super stylish.”

Lago di Garda
Once out of Venice, the tour heads west across the Veneto region to the largest of the Italian lakes, Lago di Garda, to catch the Time Trail Championships.

“The riding starts to roll a bit heading toward the lake and the views are spectacular: vineyards, nature reserves and even a few castles.”

Here the tour will catch the World Championship Time Trials, which start in Bardolino and winds up into the hills around Garda.

“Here we’re staying at the Locanda San Verolo, which is right off the time trial course just above the Lake. Last time I was there I ran into Dimitri Konychev (ex-Fasso Bartolo rider), who is the caretaker’s boyfriend. I got a few pointers, so here we’re not riding my favorite routes, we’re riding a pro’s favorite routes.”

SPROCKETMONKEY will keep the partners busy visiting the more attractive cities and villages around the lake like Riva del Garda . They will also catch the spectacular views from the top of the lake in the hills above with stop in Bardolino for a taste of the various wines of the area.

Trento
Heading north to Trento the tour will get an amazing view of the Alps.

“The area is a cycling paradise both on and off the road. Out of Trento you can head down a number of different valleys, that offer plenty of flats or climbing. The riding is fantastic. The city itself is a very cool place nestled into the Alps. You get a really cozy feeling being in the shadow of these huge mountains.”

The Piazza del Duomo in Trento – see and be seen.

The hotel here lives up to the usual SPROCKETMONKEY standard – right off the Piazza Duomo in the center of town the Grand Hotel has the best views of the surrounding valley.

“We’ll catch the region’s trendiest restaurant right in the heart of Trento – in a medieval building that still sports some original frescoes. You’ll get a taste of the wine from Mezzolombardo and amazing prosciutto from the region – and that’s just while you’re waiting for a table!”

Pity the cycling partners toiling through the Alps here – non-cycling venues include more local wine in the many wine cellars in MezzaCorona and day treatments at a nearby spa.

Verona
That’s probably enough for one tour, but SPROCKETMONKEY’s got one more trick in the bucket – the World Road Championship’s in Verona. The tour first covers the route before stopping to see how the pros do it.

“We’ll get down to business and catch the pros fighting for the World Championship on a 15 kilometer circuit around and through the center of Verona. Our hotel is literally just around the corner from the course, allowing us take it all in with some wine, cheese and prosciutto – just the way it should be done.”

“The partners will like the agenda in Verona – shopping, museums and a visit to the renaissance garden of Agostino Giusti, a local bigwig in the 15th century. As far as watching the race is concerned, my wife said, ‘Have fun, where’s the credit card?’ ”

“I’m pretty proud of the 2004 World Championship tour. It gives a great glimpse of life in northern Italy as well as a full view of one of the most important dates on the professional cycling calendar. If it turns out to be half as fun as it was to plan, we’re set.”

Proving SPROCKETMONKEY knows what cyclists need, they even provide travel cases at no extra charge to protect bikes on the trip over.