Worlds ’08: The Art of Winning, Italians Do It Best

Italy just can’t get enough World Champions – As I look down the 2008 Calendar, one event to savour is the Worlds this September in Varese, Italy – cycling’s spiritual home and with Bettini defending “his” title, this is going to be one race not to miss.

The Italian love affair with world champions is a national obsession, from football to Formula One, being the best of the best is the ultimate goal for many of the country’s top sports stars, and for a relatively small population, they do have their fair share. This is never more obvious than with cycling’s World Road Race crown, and whilst I’m sure there are many reasons for their continued success, my own favourite theory is that being the best in the world is what every Latin male believes he is from birth! 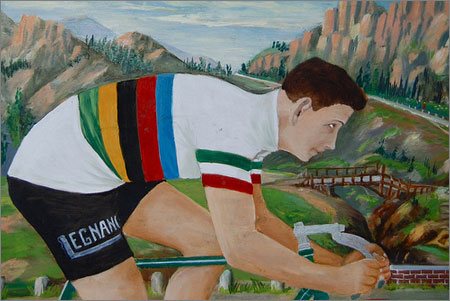 I say this with total respect, (and an Italian wife), but the majority of Italian boys are convinced from an early age by their mothers that the world revolves around them… so its only a short stop to then convince yourself that you’re the best. Then armed with this inbuilt confidence they start to apply it into other areas of their lives, including sport if they have the talent, so when it comes time for the ‘worlds’ performance they have the inbuilt advantage of already thinking they are numero uno, number one. Simple as it may sound I’m sure this plays no small part in why being world champion is so revered and important to them… unfortunately it also manifests itself in less talented Italians convincing themselves they are also the best at almost everything else, but we’ll leave that to Freud.

But enough theory let’s look at the facts. Second only to Belgium in the number of Pro World Road titles, the very first wearer of the Rainbow jersey was Alfredo Binda in 1927, a true legend, as if winning the title for himself 3 times was not enough, he later became National coach and masterminded many of Coppi and Bartoli’s Grand Tour wins in the 40’s and 50’s which kind of makes him a cycling God even today, a decade after he died. 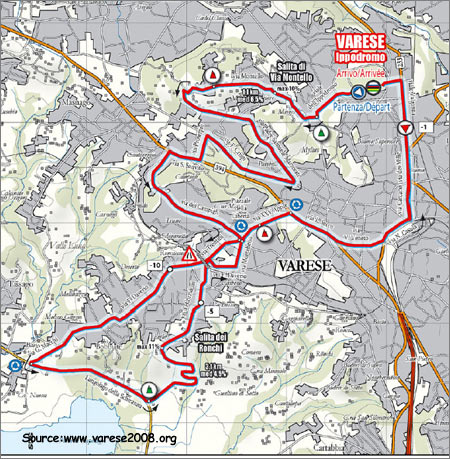 Set in the hills between Lake Como and Switzerland, this year’s Worlds course should make a great race.

The role of National coach is still a position held in the utmost esteem, and whilst it can be a poison chalice, get the result and you are made. From the Tifosi to the Press everyone has an opinion and the weeks leading up to selection for the squad play out like a reality TV show, with everyone from wives & girlfriends to the bloke who once beat Daniel Di Luca in a grade school ‘egg & spoon’ race chucking in their half pennies worth.

It does make for a great build up though and illustrates the national pride they have in THEIR squadra. The only other Italian to win the title in the early days was Learco Guerra, who won in 1931 at Copenhagen, the following year Binda took his record third victory in front of a partisan crowd in Rome. The love affair had begun, but it was not until twenty years later that the true scale of this affair was revealed. Varese was the venue in 1951 and a massive 1.5 million fans lined the route to see the Swiss Ferdi Kubler beat homeboy Fiorenzo Magni. Magni later blamed a mix up with team mates for his defeat, but the race is still remembered as one of the greats and still holds the record for number of spectators – (I’ll be exploring the Varese effect in a later article).

From Gimondi to Cipo, whatever the era the Italians know how to work the rainbow jersey. Like fresh white bar tape for most of us – just imagine how pulling on a crisp white rainbow jersey must motivate its wearer.

In 1953 Fausto Coppi restored national pride winning in Lugano, Switzerland followed in 1958 by Ercole Baldini in Reims. Ten years later and the worlds were back on home turf at Imola with Vittorio Adornio obliging with the biggest win of his career. Marino Basso sprinted to the title at Gap in 1972 and a year later Italy again delivered with Felice Gimondi winning in Barcelona. 1977 saw the the worlds really living up to its name with the first championship outside of Europe in San Cristobal, Venezuela won by the superb Francesco Moser, enabling him to start adding oh so cool rainbow decals to his bikes, a tradition that was used from the early days and is now taken to the extreme with the likes of Bettini ‘branding’ up with total rainbow coverage from shoes to sunglasses.

Talking of fashion faux pas, if you do see a weekend warrrior flying along a Milano strada in full replica world Champ kit it’s not what it seems, most likely it is the ‘real thing’ as Replica Rainbow is a huge Non Non! in Italy, which goes to show what high respect the title holds.- you’ve got to earn the right to wear that jersey. 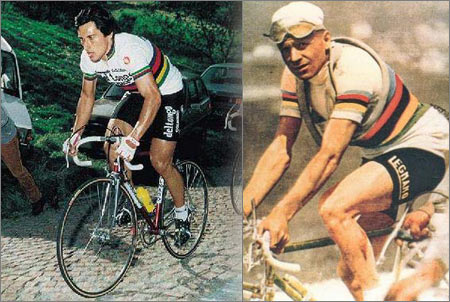 Saronni was my ultimate world champion, but Binda is top scorer with three wins.

Next …My personal all time favourite Italian world champion has got to be Beppe Saronni, winner in 1982 at glorious Goodwood, he personified what a world champion should look and act like for me, on top of his Claret Colnago, slicked back hair, immaculate on and off the bike, his season as world champion was ridden at the highest level. Proud as a peacock in “his” jersey, he still rates it as one of his best wins from a huge palmares. 1986 saw the Worlds in the US with Colorado Springs and Moreno Argentin doing the honours, whilst Maurizio Fondriest got on the top step in 1988 at Ronse, Belgium. 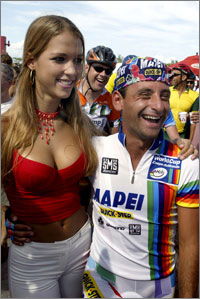 I know, I know… its not the true rainbow jersey, but, in true Italian style who’s looking at that. If Bettini wins this September his legend is assured.

The early 90’s saw Gianni Bugno achieve a guaranteed free grappa in any bar he entered for the rest of his life with consecutive wins in Stuttgart & Benidorm, followed in 2002 at Zolder by Mario Cipollini with a win that helped crown “il re leone” as one of the best road sprinters of all time, he obviously respected the title in his own way, as it’s rumoured he commissioned a rainbow coloured Brietling watch to celebrate – pure Cipo bling.

Finally, and bringing us right up to date, Paulo Bettini is currently writing history with his gold collection, and if he does manage to take double Olympic wins this season and a third consecutive world title (and I wouldn’t bet against it ) you can only imagine the celebrations that the Tifosi will be throwing – just don’t invite Mama. 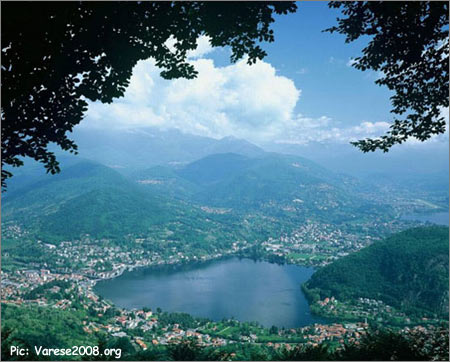 • To experience the worlds first hand this year and all the Italian passion that goes with it visit: www.GrupettoItalia.com
• See the official Worlds website: Varese2008.org

RIDE WITH JELLY BELLY At ToC: A WINNER!

Astana Out Of Tour De France