Spanish rider Luis Perez from the Cofidis squad has taken out stage 2 of this year’s Vuelta Espana, while weaknesses appeared with several top riders struggling over today’s 3 classified climbs. But the real story came before the riders had even left the start in Gijon.

World champion Mario Cipollini’s participation in this year’s final Grand Tour has lasted precisely 27 kilometres. The Lion King quit overnight, and caught a plane home to Italy, leaving race organisers fuming and his team in an awkward position, having only been granted a start when Cipo backtracked on his earlier decision not to go to Spain.

Once the flag dropped, an early attack shortly after the race went over the 3rd category Alto de la Madera set the pattern for the day, with Saeco’s Cristian Pepoli, Pedro Horillo from Quick.Step, Constantino Zaballa of Kelme and Cesar Garcia Calvo (Labarca-2) taking off after 24 kms.

This quartet hung out in front of the ONCE-controlled peloton until Horillo dropped away on the cat. 2 Alto de la Faya de Los Lobos, but they never got more than around 2′ 30″ with Jorg Jaksche (making up for getting dropped in the TTT) and Mikel Pradera doing fearsome turns on the front. Eventually, the pace of the chasers and the arrival of the rain did for the breakaway with 50kms left.

By the time the Alto Mirador del Fito loomed into view the peloton had split in 2, with Levi Leipheimer, Alex Zuelle and USPS’s Chechu Rubiera caught in the second half. Leipheimer eventually lost 13 minutes, putting him totally out of the overall running. Up front, with a ferocious pace being set on the climb, Luis Perez and CSC’s Carlos Sastre escaped from Claus Moller, Isidrio Nozal and Michele Scarponi, cresting the summit together and hurtling down towards the finish, still a good 15 kms away, but close enough that the sprinters wouldn’t get back up to them.

The peloton, which had splintered on the climb pulled itself back together, with arguably the biggest sigh of relief coming from Aitor Gonzalez who struggled to folow up the slopes. 2001 champion Angel Casero was also seen in trouble. However, Perez and Sastre were too quick and held out. Perez manouvered his fellow Spaniard to the front, then dived past with 250m to go, scoring his first professional win. ONCE’s Joaquin Rodriguez took over as race leader by virtue of finishing ahead of his team-mate Igor Gonzalez de Galdeano in the bunch. 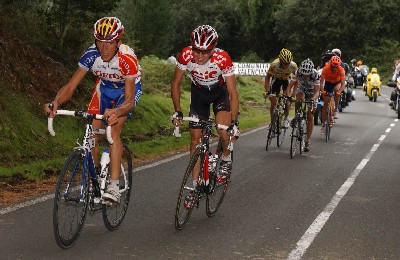 Behind the leaders, there were catastrophic time losses for several top stars. Cadel Evans lost over 4 minutes, Alex Zuelle lost 12, and David Millar and Jose Antonio Pecharroman finished right at the tail of the field more than 17 minutes down, alongside Fassa’s Sven Montgomery