So it’s here at last, the best event of the year in cycling. Yes it’s the daily distractions of La Vuelta! Oh yeah, there is a bike race as well. Today’s first stage is a team time trial again for the third year, the now lost ONCE squad have won the last two so the Liberty Seguros team will want to it carry on.

This years race will be a battle between the Spanish as usual, with so many Spaniards on different teams. The only teams without a Spanish rider are T-Mobile, Alesio and Vini Caldirola, but they have Stefano Garzelli who lives in Spain any way.

Nice sunny weather makes for a change, as it usually rains. In 1999 when Igor Gonzalez de Galdeano won the individual time trial and took the first yellow jersey as the last riders finished in darkness. Things started well with some very beautiful girls holding up the riders on the start ramp, nice. 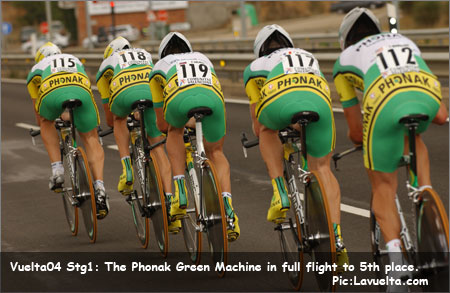 So will any one do a Quaranta and turn off the course after 5 minutes to go to the pie shop or a Cipollini and go home after the first stage, we hope not.

Todays stage starts and finishes in Leуn, 27.7 kilometers with a slight rise in the middle. First team off at 15.25 and last at 16.47, an average speed of approximately 52 kilometers an hour it should take them just over half an hour.

Of the early teams off Illes Balears were the fastest at 31 minutes and 41 seconds, and the slowest Rabobank, looking very raged and down to there last five men by half way. Kelme, sorry Comunitat Valenciana look good in their new kit, it’s only took six months for them to get it, but looks good anyway. U.S. Postal started fast and was faster than Balears at the first time check, and dropped Mikhailov with a long way to the finish on his own. 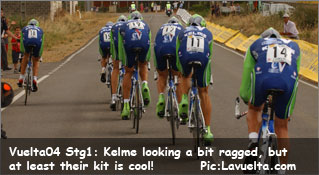 Liberty Seguros also looked fast and lost Renй Andrle and then Jan Hruska and Dariusz Barnowski on the little climb, but were not fast enough to be in contention with U.S. Postal and T-Mobile and not on a good day. C. Valenciana finished fast and all together to be just beaten by Balears. Liberty had a very bad ride to finish 8th to U.S. Postals win, last was the Basques of Eukaltel, saving themselves for the mountains?

Rabobank must have been wishing they already had signing for next year, Denis Menchov to help them out, replacing Liepheimer whose going to Gerolstiener.

So U.S. Postal take the stage and Floyd Landis the overall lead.