Stage 12 was expected to be tough, with three first category ascents, which included gradients of up to 11% it didn’t take a Bjarne Riis brain to figure out. How did the play unfold? Read on to find out…

This morning began with The Floyd in the Golden Fleece. The first few kilometres were marked by numerous attacks but the most significant of these occurred on the slopes of the first climb of the day. Francisco Lara (Paternina), Joseba Beloki (Saunier), Javier Pascual Rodriguez (Kelme) and Marcos Serrano (Liberty) all managed to create a distance between themselves and the peloton, but Lara was the only rider to commit to the endeavour. He began to gain time on the pack whilst a chase group formed including former Giro winner Stefano Garzelli and T-Mobile star Vinokourov. In between a rock and a hard place lay Cardenas and Serrano at about 1’30” behind Lara after breaking away from the other pursuers. They had an advantage of 50” over the remains of the bunch who were therefore 2”20 behind the leader on the road. Maths lesson over.

Lara continued to push ahead in his solo effort but the peloton carefully marshalled his progress as he started the day at only 8’ on GC in 22nd spot. The diminutive racer reached the second climb of the day, the Alto de Calar Alto. The Paternia rider held a 4’ lead on the main pack but only about 2’ on the chase group of seven. As the rain began to fall he still looked strong and evidence of his strength was provided by the lack of progress made by the chasers in their bid to recapture the escapee. Their attempt was not helped by a lack of unity in the group as riders began to attack to further their own chances. In a surprising move, Lara’s Paternia teammate, Gomez decided to attack the chasers on the climb. He was caught by the Vinokourov group nearing the top of the climb, as was Cardenas. This group trailed the stage leader by 4’05”. On the wet descent, the nine strong accumulation began to lose ground to the peloton and was soon caught. With 34km to go, the solo star of the day maintained a good pace and a handsome lead of about 5’ on the pack but a concerted effort from the peloton could eliminate that at almost any time… 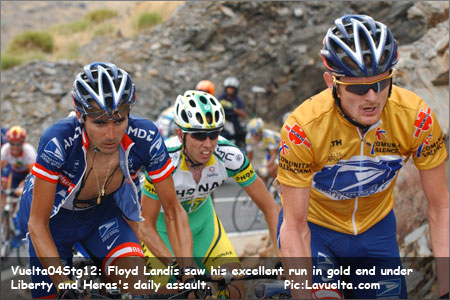 The final climb to the finish ascended the Alto de Calar Alto. No not a mistake on my part, the organisers made an imaginative initiative of sending the race up the same mountain from a different side. Maybe it was a buy one get one free deal. Lara hung out front with about 3’35” on the Liberty lead bunch, which was quickly reducing the peloton with its fierce pace. Within the space of a few kilometres, a few contenders found themselves in trouble. The Floyd dropped off the pace but dug ‘into the red’ to claw his way back into contention. As the group powered up the slopes relentlessly, Lara’s lead was diminished and just less than 7km from the finish, he was caught. Roberto Heras took advantage a moment’s satisfaction in the bunch to make a vicious acceleration to which no one could answer. As Heras continued to carve out his advantage in the closing kilometres, Valverde, second placed on GC exploded. No groups remained, and former leader Floyd Landis was in grave difficulty. The race was shattered and Heras continued his roaring ascent to take an impressive victory 34” ahead of Santiago Perez and 53” ahead of Francisco Mancebo. Despite suffering enormously on the steep sections of the climb, Valverde managed to continue strongly following his trauma and ‘only’ lost 1’27” to the stage winner.

So today’s stage was as expected, a killer. The GC has been shaken up once again and defending champion Roberto Heras is back in the lead. A second solo victory in two days of racing was not to be as the brave Lara was pulled back. Yet again, the Vuelta is unfolding in its own unique exciting and unpredictable fashion. Tomorrow’s stage should be one for the sprinters, providing they can get down the stairs of the hotel following today’s battering. The 172km from El Ejido to Mбlaga has no climbs and a net loss in altitude of 70m so watch for the big guns firing in a bunch dash for the line. However, another escape cannot be ruled out, so it’s still all to play for in Spain.