Today’s stage cracked off in Heras’ hometown and included four categorised climbs to spice up the proceedings in the final days of the race. Did the Homeboy take inspiration from the locals or was the day stolen by another pretender to the Vuelta’s throne? Read on… 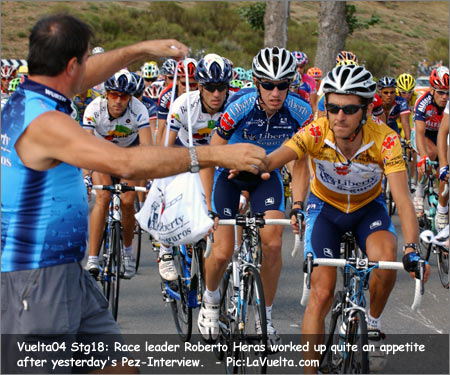 The Basque rider gave up in his pursuit and on the second climb of the day the escape held an advantage of 6’47” on the peloton. At around 69km to the finish, Heras’ Liberty team were bearing the yoke of the pace making when Unai Osa of Illes Balears decided to attack. The Liberty train were clearly surprised at this move, as they believed their pace was sufficient to hold off such an attempt. There’s jaws dropped open for a second time as Unai’s teammate and potential GC contender Mancebo nipped off the front and bridged across. For the next few kilometres the pair made a valiant effort but the Liberty riders soon got their act together and reabsorbed the duo. The result of this shot increased the speed of the peloton resulting in the break’s lead waning to 3’21” and the peloton itself being reduced to about 40 riders.

On the third climb of the day, Mikel Pradera (Illes Balears) attacked with Cedric Vasseur (Cofidis), which spurred a further acceleration in the pack spearheaded by Mancebo. The group shattered leaving 19 men to chase the escape leading up to the final climb of the day. Following this, the peloton regrouped and the Liberty team reassumed its position on the front. Seemingly happy with this arrangement, the pace eased allowing the break to begin to gain time once more and providing Vasseur and Pradera with an opportunity to catch the escape. However, up in front, in the last 30km the group of 10 began to attack each other which resulted in three riders being left in the lead: Ivan Parra (Cafes Baque), Javier Pascual Rodriguez (Comunidad Valenciana-Kelme) and Joan Horrach (Illes Balears) whilst the others floundered in pursuit. Parra went on to attack again. He was caught by Rodriguez leaving Horrach out in the cold.

Numerous attacks and counter attacks in the peloton on the final climb left a chasing group containing Heras, S. Perez, Valverde, Plaza, Mancebo, Garcia Acosta, Pradera, Sastre, L. Perez, Serrano and Veneberg but with a 3’48” deficit with 15km remaining, the money was on the two leaders. Rodriguez looked to be the stronger, matching the irrepressible Parra blow for blow. The stage was set to finish on the famous cobbled climb in the walled city of Бvila. Rodriguez set the pace over the rough surface in the closing kilometres, putting the pain into Parra. In a display of almost arrogant confidence, Rodriguez took a drink from his bottle in the closing 500m. Parra did not respond instantly, but the moment he did decide to accelerate, Rodriguez turned on the gas and powered to victory, scoring Kelme’s fourth win. 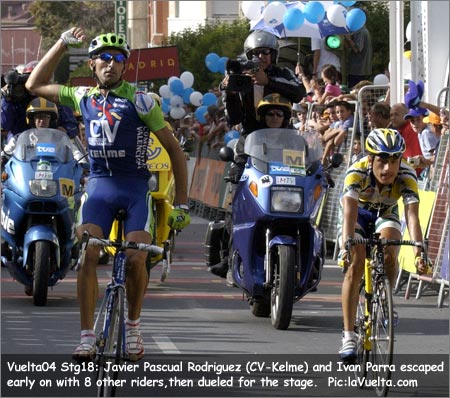 So not a lot has changed at the end of one of the more challenging stages of this year’s Vuelta. This is probably an indication that the main protagonists are all still in good form and recovering well. Liberty Seguros put on another performance of ‘Postalesque’ dominance to neutralise any dangerous moves, which suggests that Heras really is the man to beat. The last three days could still ruin this particular Spaniard’s dreams with a short nervous mountain stage tomorrow and a brutal course for Saturday including four Cat 1 climbs. The 30km ITT finali could also shake up the favourites. With three days remaining, a bad day could change the outlook completely for any of the top riders so stay tuned!

G’DAY Suisse: What A Season