The 3rd stage of the Vuelta was supposed to be another day for the sprinters. With 157 flat kilometres and no classified climbs en route this course was made for the fast men of the peloton with yesterday’s winner, Petacchi the obvious favourite.

There were many riders who wanted to spoil the sprinter’s day with a breakaway though & the first to try his hand was Pez favourite, Bert Roesems (Relax-Bodysol). Bert’s break didn’t last long though & he was soon brought back into the fold. Numerous counter attacks followed with a break of 4 eventually sticking. In the break was 2nd place overall, Benoit Joachim of US Postal. The Posties seem to like sharing the golden leader’s jersey of the Vuelta this year & Benoit had gold in his eyes as he took the first 2 bonification sprints from his fellow breakaways, Andy Flickinger (AG2R), Thorwald Veneberg (Rabobank) & Kevin Hulsmans (Quickstep). 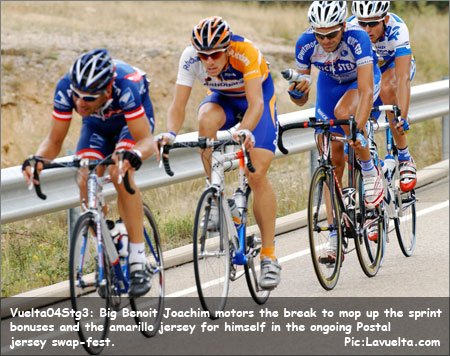 These 2 sprint wins gave Benoit 12 bonus seconds & the clear lead in the GC. These seconds combined with the 10 minute lead the break had over the peloton, made it look like a pretty successful day for the Postie from Luxembourg. With no chase coming from any of the sprinters teams, it was Saeco who eventually took up the effort ten kilometres before the feed. Saeco had seven men on the front of the peloton driving hard & quickly reducing the break’s lead, perhaps trying to set up their young sensation, Cunego?

Obviously the boys from Saeco were just hungry though, because straight after the feed they shut their chase down once they all had their musettes in hand. With no sprinters teams interested in the chase, the gap ballooned once again & the four attackers looked like fighting for the win.

Benoit Joachim took the final bonus sprint, taking his day’s tally of bonuses to 18 seconds. Cofidis & Kelme finally realised that the day’s stage was perhaps slipping away from them & they sent some workers to the front. As the rain started to fall, Matthew White (Cofidis) was setting a brutal pace on the front of the peloton & the leader’s gap which was looking very comfortable all day was starting to look shaky. The four were still working well, but Cofidis & Kelme were starting to get some more help from T-Mobile & the gap was falling at an alarming rate.

Notably absent from the chase were Fassa Bortolo – perhaps content to watch the other team’s tire themselves & profit from their work in the finale? Or maybe, they were thinking that the slight uphill finish into Soria would be too much for their ‘afraid of anything slightly uphill’ man, Petacchi.

After a terrific chase, mostly by T-Mobile in the final 20kms, the break was caught with only 8kms to go. All T-Mobile’s good work came to nothing though as Zabel punctured with 3kms to go and with no hope of him returning to the peloton, Vinokourov decided to try his hand in the sprint with 500m to go. The slight uphill wasn’t hard enough for his climbing legs though & it was the young, speedy Spaniard Valverde (Comunidad Valenciana-Kelme) who jumped with 200m to go and won by 4 lengths from Cofidis’ Stuart O’Grady & Menchov (Illes Balears-Banesto). 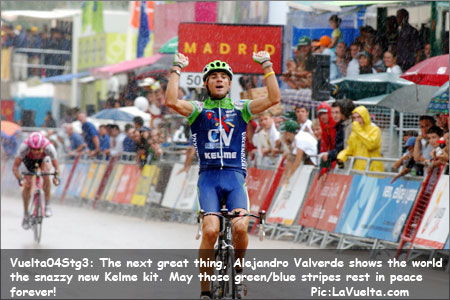 Valverde picked up a handy 20second bonus for his win & also gained some time on his GC rivals as there were a few splits in the field, in the difficult wet sprint. Most notable in their losses were Tyler Hamilton (5 seconds), Oscar Sevilla (15 seconds) & most of the Posties (15seconds) including the new GC leader, Benoit Joachim & yesterday’s leader Landis. 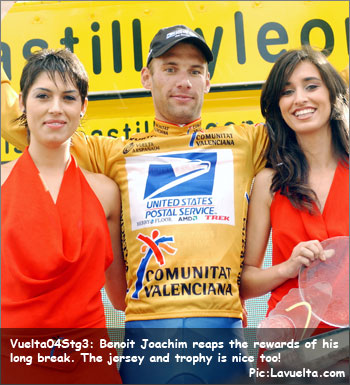