Vuelta Stage 9: Fox in the Henhouse!

OK, enough of this “taking it day by day” silliness, let’s get ready to rumble! After yesterday’s time trial, the peloton awoke to find Postal still swapping the golden laundry, but with Hamilton and a host of climbers licking their chops with the first real mountains on today’s menu.

After the initial thrust and parry of the first week, the Vuelta has begun to take its first stabs at sorting itself out after the time trial. About time, because this phony war was about the phoniest I can recall. Personally, I’m getting tired of all the riders saying they’re not sure how they are going. I don’t know about you, but have you heard Armstrong saying he’s going to take Le Tour day by day the past six years? And what about Petacchi complaining about being not in good form? I’ll have a bucketload of that bad form please!

OK, so onto today and the first mountaintop finish of the race. The mountains, along with the blast furnace heat coupled with the soggy humidity, are sure to make life miserable for the peloton the next few days. Sure enough, the boys at AG2R either are succumbing to the weather or have been sampling T-Mobile’s fish salad, because Flickinger, Inaudi, Berges, and Laidoun have all decided to pack it in. They’ve been joined by a mini-peloton of riders, including Postie sprinter van Heeswijk and Rabo Robbie Hunter.

Lots of riders obviously wanted to get a lead on the peloton before the climbing, with a nasty 42.6 km/h first hour and lots of breaks trying to form off the front. Finally, the pack let a 14-rider break go up the road prior to the 3rd Cat. La Magarida. Pretty much every GC team had a rider in the break, so nobody was overly motivated to pull it back.

In turn, the mountains do their own sorting out of the break, with Felix Cardenas (Cafй Baque) , Tadej Valjavec (Phonak), and Pablo Llastras (Balears) taking off on their own with a 4 min lead. Floyd Landis (USPS) looked comfortable surrounded by teammates, while Hamilton indeed looked to be suffering a bit as promised.

Onwards to the approach of the final climb to Alto de Aitana in Alicante, Phonak DS Alvaro Pino decided to get serious about the GC and have Valjavec drop back from the break to help out Sevilla and Hamilton, leaving former Vuelta KOM Cardenas and Llastas to try to stick to the finish together. Should be a fun battle, with 4:40 in hand. 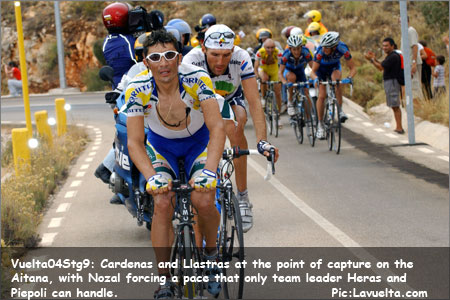 Cardenas takes the initiative and motors with Llastras in tow, while behind USPS shows awesome solidarity with former leader Beltran motoring at the head of the peloton. However, it looks as if Manolo Saiz has design on this stage for some major damage, as Liberty starts putting the major hurt on the dwindling bunch, with Baranowski doing the first weeding out. Then Nozal causes an explosion in the leading group, shedding Sevilla, Vino, Beltran, and even gold jersey Landis and Valverde. Nozal continues to lead Heras as they catch Cardenas and Llastras with about 3 k to go! Looks just like another famous Blue Train, with Heras in charge this time! 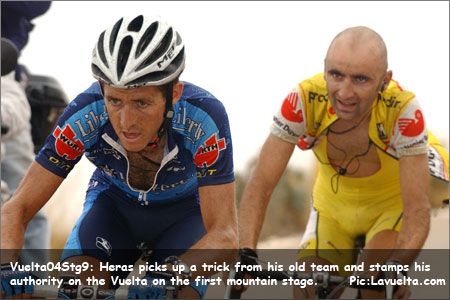 There seems to be a stowaway on this express, however, as a Saunier Duval rider is glued to Heras when he attacks. The optimists would say that Beloki is back to raging form. However, the realist would say that Beloki was dropped a few mountains ago, and it’s Piepoli instead who sprints by Heras at the line for the stage. Landis does a great job of limiting his losses and manages to hang onto the Oro for another day. 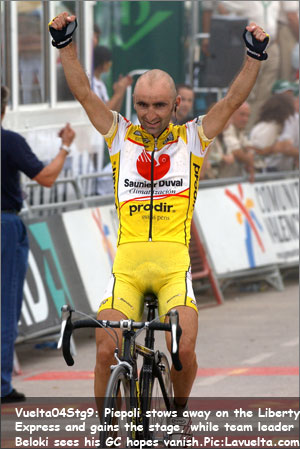 So what have we learned from the first mountain stage?
– I won’t doubt Hamilton again when he says he only wants the time trial and isn’t targeting the overall.

– Heras has learned from his ex-team leader about hammering the competition on the first day in the mountains.

– The Spanish Civil War is fully on, with Kelme, Liberty, and Illes Balears putting their cards fully on the table. Will Postal succumb to the onslaught, or will they use the battle to their advantage?