He doesn’t win that often, but when he does it’s usually worth the wait. Last year’s Spanish national champion, Francisco Mancebo, came out first on top of Ordino Arcalis for his first big win in recent times.

The Illes Balears boss man had a pretty good, if overshadowed, Tour de France where he rode consistently to 4th overall. Today he managed to haul himself back to Heras’ wheel when the big attack came, and then scraped by as Heras and Menchov thought they were slugging it out for the stage win.

There was a lot of attacking early on with all the Spanish teams having a go, and a lot of efforts from Phonak – the Swiss mob sent Elmiger, Pereiro and Perdiguero up the road as they tried to salvage something following Landis’ exit on Thursday.

Significantly, Liberty Seguros had put Angel Vicioso into the lead group – smart thinking by Manolo Saiz, because Michele Scarponi bridged up on the category 1 Port de Collada de Tosses along with Rik Verbrugghe, Inigo Cuesta and Joan Horrach, giving Rabobank a bit of a headache. 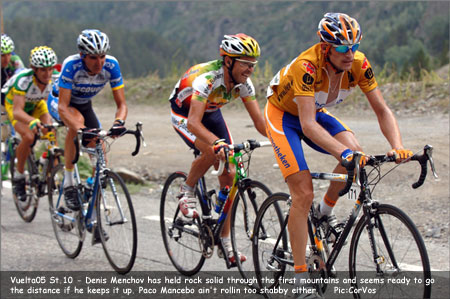 Things gradually came together, though, with the gap tumbling. This left Verbrugghe to give it all on the final slog to Arcalis, but he ran out of gas.

The big names ground the field down over the final 11km slog up to the finish, where a young Jan Ullrich once destroyed his rivals to take hold of the 1997 Tour de France.

Roberto Heras, smarting from his 10-second penalty for cutting a few corners (OK, a lot. Well, nearly all of them) on yesterday’s TT, tried to drop Mancebo, Denis Menchov, Sastre, Beltran and the rest, but the time gaps just weren’t as massive as you’d expect on such a big climbing day.

So Menchov got another opportunity to snuggle up to the podium girls, and if you want to know why he barrelled it so hard in yesterday’s TT, may I take this opportunity to divert our gentlemen readers to the Distracciones de la Vuelta section? Gracias to our fabled Vuelta reporter Al Hamilton! 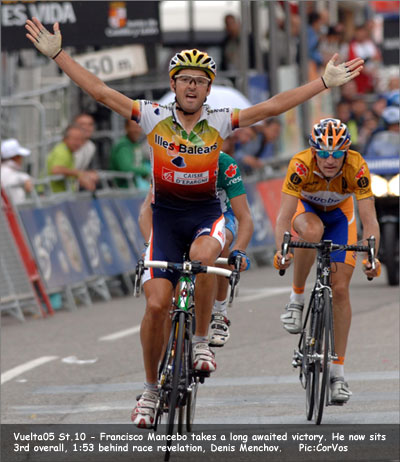 The golden jersey is starting to look like it fits a little comfier around the big Russian now … maybe Heras has met his Vuelta match?

Certainly Roberto can’t count on the support of Isidrio Nozal any more – the previous Vuelta podium-getter abandoned this afternoon, and he wasn’t the only one with guys like 2001 champ Angel Casero and Max Van Heeswijk opting for siestas. More mountains and a ski station finish again tomorrow so you can’t really blame them!

Return from Injury: OR to Olympics