And that’s the polite way of putting it! If you’re going to screw up in a big-time ProTour race, then you better do it when the organisation has been so shambolic that you’ve got ready-made excuses.

Poor Mauricio Ardila will be using a lot of very different words for screw-up which you might not find in a dictionary after coming within 200 metres of scoring a Vuelta stage win. The only problem was that when he made his final sprint for the line ahead of Oscar Pereiro and Samuel Sanchez, he sprinted for the ‘wrong finish’. 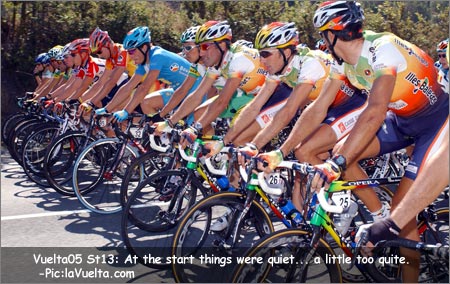 In their infinite wisdom, the Vuelta bosses had a King of the Mountains sprint just 200 metres from the real stage finish. That information and the riders seemed like long lost cousins as today’s stage distance expanded and constricted like an anaconda ‘processing’ a villager.

The whole shebang kicked off because of a broken down lorry at the midway point of the stage which had started out at 196kms long. The organisers made it longer first, then shorter, then shorter again, all while the riders were flying from Burgos to La Bien Aparecida. The last 2 changes came inside the final hour of racing. 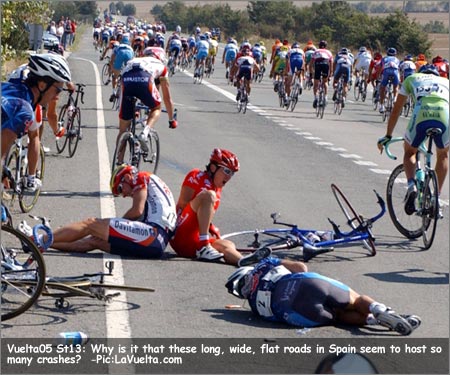 At the ‘line’, Ardila gleefully threw his arms in the air and Pereiro eased up thinking he was beaten, only to see Samuel Sanchez miraculously come from a few bike lengths back to nip past and take the real win, with a laughing look of disbelief. It’s like they say in other sports: “You’ve got to play to the whistle”, and Ardila got caught out.

But at least he can pin the blame on the organisers or his team because there is a KoM sprint clearly marked on the route profile and maybe someone should have sent out the cycling equivalent of an APB for that KoM point? 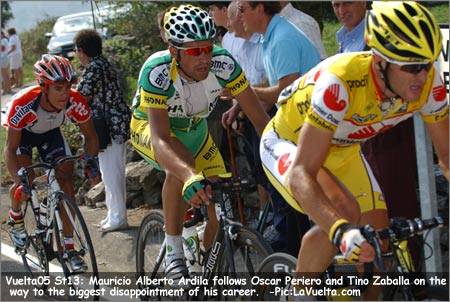 Oddly – no photos of Ardila crossing the line have been posted by the Vuelat organizers.

You’ve got to feel sorry for last year’s Tour of Britain winner, but I’d put money on him either winning angry tomorrow at Lagos de Covadonga or abandoning gloomily in the morning.

He’s been quoted by the La Vuelta website as saying: “These things happen in sport. I made a mistake and I have to assume that, but this is a sport and sometimes one gets confused. The important thing is to learn from one’s mistakes”.

Things were fast from the flag today with lots of attacks – one had over 30 guys in it, so I reckon that practically counts as a split in the field. There was another big crash early on today, at about 50 miles an hour, resulting in Tom Steels getting KO’d and leaving the race in the back of an ambulance.

Things were so fast that the riders were way ahead of schedule catching out the TV guys so pictures were a little ‘sporadic’.

Roberto Heras started after his tumble yesterday and got through to the finish alongside all the other GC contenders with no other problems.

We even had the unusual sight of Alessandro Petacchi leaving the cocoon of the Fassa train for the rarefied air of the open road – twice! Must have been feeling a bit frisky knowing he probably wouldn’t challenge for another win on a Cat. 3 finishing climb.