With his Vuelta 2005 chances drinking resolutely at the last chance saloon, Roberto Heras needed to haul himself blinking into the daylight to have one last go at seeing off Denis Menchov.

And on his final opportunity to take serious time, the 3-time champion succeeded, demolishing his isolated Russian rival. Menchov doesn’t have the strongest Rabobank squad with him this year, but Manolo Saiz has made sure that the Liberty Seguros cavalry were in full force for Heras. 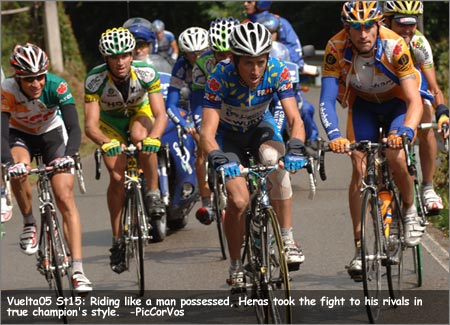 After a flurry of attacks, a 23-strong group got clear (with 3 Liberty men (Scarponi, Beloki and Vicioso versus De Groot of Rabobank) and a counter-attack formed with yet another Liberty man (Marcos Serrano).

Already, Menchov following Heras was looking a bit vulnerable. That position got weaker when Jukka Vastaranta abandoned leaving Menchov down to 4 helpers.

On the Alto de Colladiella, with 56 kms left, Heras pulled out the proverbial six-shooter and bulleted away. Menchov, Sastre and Sevilla followed …. Briefly, before another acceleration put them all in trouble. 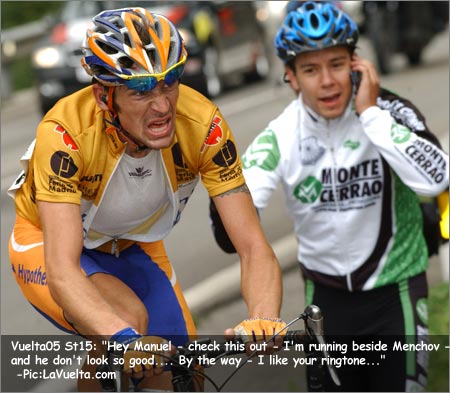 Heras no doubt had a portly man shouting “Venga! Venga! Venga!” at ear-splitting volume into his radio earpiece and raced harder to try to make him stop.

The gap slowly opened, and then grew more rapidly once Heras contacted his team-mates up front. 40 seconds became 1.5 minutes, then more. Beloki was doing monster amounts of work for Heras, while Menchov was relying on the CSC team to help Sastre and Illes Balears to help Mancebo who was also dropped.

All day the weather had been grim and it was getting worse with torrents of rain pouring down, making for an epic day of racing.

Menchov was in a real state, giving everything but falling further back; Heras kept levering up the pressure. On the final climb, he finally shed the remaining breakaways and went for it on his own.

Steep pitches of 16-17% briefly slowed Heras, but he was soon back to full speed, driving it through the fog to the finish. He came home for a brilliant win, with Samuel Sanchez a fine second. Friday’s victim, Mauricio Ardila, had a good day again for sixth, but the real story was the damage to the overall picture. 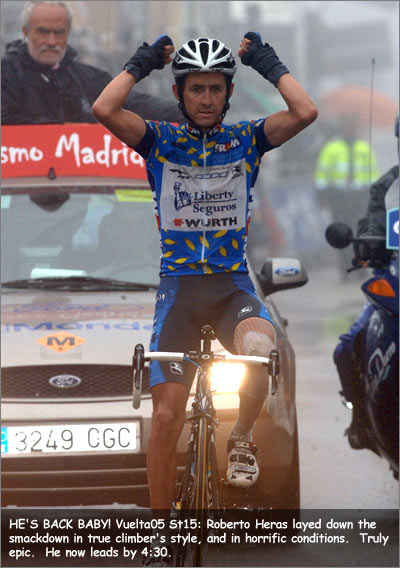 Heras looks odds-on to win in a week’s time. Keep it Pez to see if this Vuelta offers any more twists and turns.