To day was not a super hard day, but it could have caused a few upsets. Heras is fairly safe in his overall lead; behind him the others have a lot to play for and to day could give them the springboard to move up. 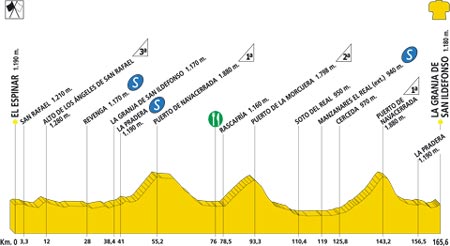 The action started early with a break including mountain leader Rodriguez (Saunier Duval) and rival Blanco (C.V.), they took the points in that order and then got caught. Next it was Petacchi who went after points at the intermediate sprints to get closer to Heras’s lead in that jersey. 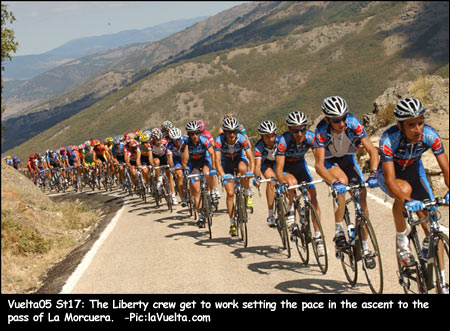 That caused a big break to pull away and it stayed away until the climb of the Morcuera when things started to happen where the group split and Liberty started to chase. Mancebo (Illes Balears) lit the touch paper by jumping away from the chasers. 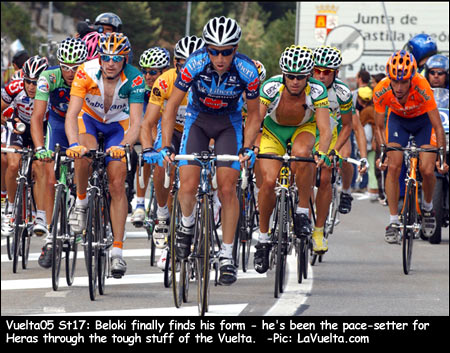 By the top it was Simoni and Blanco ahead and a lot of riders all over the road, chasing or catching. On the second time up the Navacerrada with 22 kilometers to go, Garcia Quesada (C.V.) was away on his own ahead of Mancebo and Santos Gonzalez. In the main bunch Sastre had to chase as his 3rd spot on gc was now threatened by Mancebo and Quesada – and of course Heras and Menchov stayed close to him. By the summit Quesada had 1:40 on Mancebo and the bunch at 2:24.

With 10km to the finish all was the same and it looked like Garcia Quesada had it in the bank, the important thing was the time gaps. At the finish the gaps were about the same, Garcia Quesada wins ahead of Mancebo and the stars 1 minute 40 seconds behind, panic over, hard day but nothing changes much. 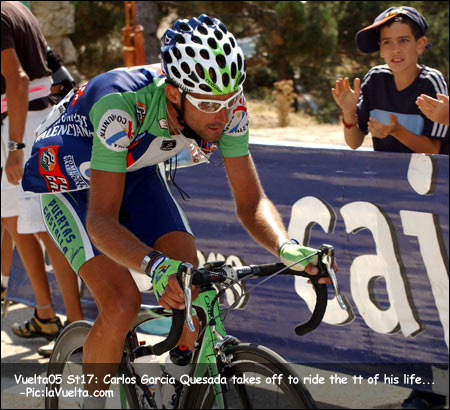 Rider Comments – Reported by team Liberty Seguros
Note: The original translations are used to keep the picante flavour of the Spanish race – ed.

• Roberto Heras: “One more day, the team’s work deserves 10. My companions have been sensational and I have felt well. The race has been very fast, with many attacks, but we have controlled them without problems “.

• Manolo Saiz: “It has not been a calm stage because there have been a thousand breakaways, but we have controlled well, with very much order working and it gives the sensation that we go relaxed. Quesada and Mancebo have attacked well, strongly, but that they take a minute it is not a problem for us. Scarponi has not had today a good day, though he has worked very well before, but this time was not him for the end, but Serrano. This is the key, that Heras always has a companion to his side. Tomorrow will repeat it of today, people race a bit crazy and seems that breakaways never are not valid”.