Today gave us an ever-changing picture of breakaways and chasers spread all over the place – a very exciting day’s racing. Not that you’d know from looking at the main field.

The peloton lost interest very early and trundled over the line more than a quarter of an hour behind. Safe to say that no top ten places changed and Roberto Heras is one day closer to winning his fourth Vuelta title.

With that we bid ‘Adios’ to the peloton as we won’t be referring to them again today. 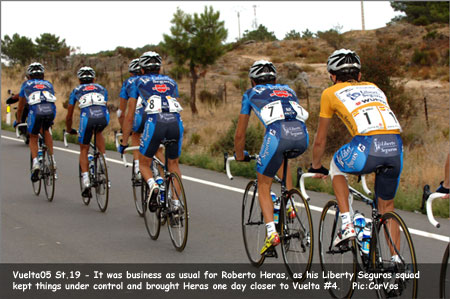 This afternoon’s victor, taking a first ever Grand Tour stage win was Heinrich Haussler of Gerolsteiner. The bald facts are that he was fastest out of four at the finish. Juan Manuel Fuentes (who’s been quite active in recent stages) lead things out in the dash for the line.

Fuentes ran out of juice and was overtaken by Phonak’s Martin Elmiger. Haussler had been playing the ‘Smart Cookie’ card by forcing Elmiger to chase the Spaniard.

As Elmiger tired, Haussler jumped out and nipped him on the line. A neat win for the young German, and one that hints he could do this pretty regularly in future.

As a betting man, I’d prepared to stake my usual few dollars on Linus Gerdemann – CSC’s German phenom was looking super aggressive and in the mood for winning. He made the early break and helped drive it along with Lastras, Zaballa and Adolfo Garcia Quesada.

But as things panned out, I’m afraid my investment didn’t pay off – so no Friday night on the tiles for me.

Behind the situation was about as stable as a tin-pot dictatorship when the population realises that the President has absconded with the loot. Total chaos, as about 10 riders chased the front quartet.

Then another half-dozen, then a couple, then another couple. Elmiger was quite a bit back behind the leaders early on – certainly not in the first chase group – so the Phonak man did a great ride to get across. 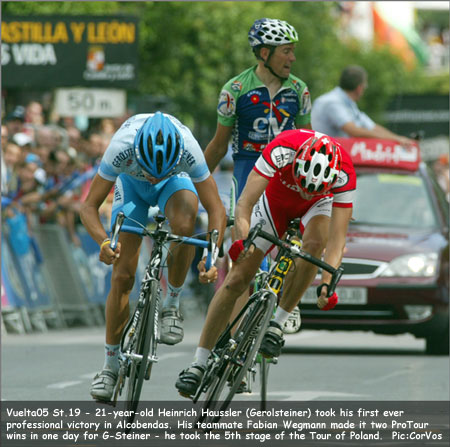 Gerdemann looked strong, chasing down a lot of moves and making some attacks, but he maybe lacks the top-end speed and experience to make it count at Grand Tour level …. so far.

He was caught out when the decisive move came – Adolfo Garcia Quesada was caught 15kms from home, and Gerdemann missed the immediate counter attack from the Haussler/Elmiger/Fuentes/Latasa combo. Today will stand him in good stead for the future and CSC won’t be too disappointed.

Up front, his young compatriot did the business so Germany has something to celebrate tonight.

Lance Talks: “We Have Nothing To Hide”