The penultimate day of the Vuelta didn’t promise any surprises, but delivered big-time in the astonishment stakes! Ruben Plaza confirmed his talent and his fine Vuelta placing with a thunderous ride on a pan-flat TT course to demolish the all-comers Grand Tour Time Trial speed record. 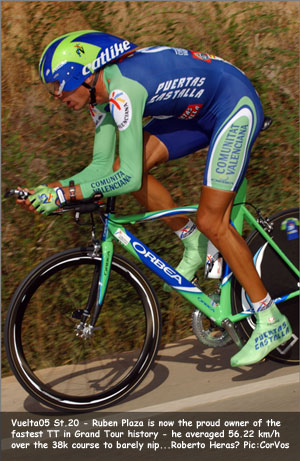 The Comunidad Valenciana star hurtled over the 38.9 kms course between Guadalajara and Alcala de Henares in a frankly amazing 56.2 kilometres per hour – ladies and gentlemen, I think we may have a new challenger for the World Hour Record!!

OK, there were mitigating factors – the course was dead flat and there was a raging tail wind, but it’s still amazing to generate that speed and power over such a distance.

Equally astounding was the performance of Roberto Heras – not many climbers can TT like the Liberty head honcho did today, but I guess it’s easier to raise your game when you’re one day away from a record fourth Vuelta victory.

In fact Heras came within a hair’s breadth of winning, separated from Plaza by nano-seconds. And that would have been a surprise. 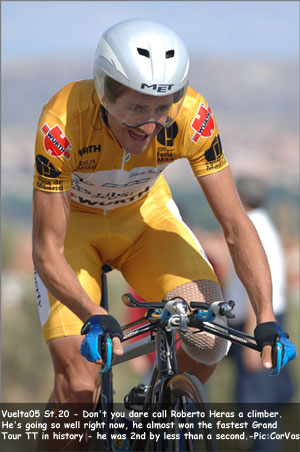 There were no major changes in the top 10, as most of the leading riders took advantage of the conditions to post super-quick times.

A big loser was Juan Miguel ‘Super’ Mercado who dropped two places to tenth overall. Tom Danielson showed that he may just be the guy for Discovery Channel in 2007 with another solid performance – top 10 on the day and overall.

Among the early pace setters was Magnus Backstedt – with everyone focussing on the Italy versus Australia sprint battle at the Madrid Worlds next week, just maybe big Magnus can cause an upset if peple forget to keep an eye on him.

One day left in the last Grand Tour of 2005 and Heras is home safe. Pez will round out our Vuelta coverage in Madrid tomorrow, before we take a well earned siesta in time for the World Road Championships …. stay tuned!