Starting at 50 m, arriving at 30m, with the high point in between at 490, Stage 8 is a sprinters dream. Some riders might be taking it easy, in anticipation of tomorrow’s ITT. But nonetheless, the first breakaway attempt was at 6km out, started by Davitamon’s Bart Dockx. He was followed, and soon a group of three was formed, Dockx along with Angel Gomez of Saunier Duval, and Xavier Florencio of Relax Fuenlabrada who finally caught on at km 28.

The first sprint of the day at La Gornal was taken by Dockx, then Gomez and Florencio. At sprint two (El Ordal) it was Florencio, Gomez, Dockx, and the lead was over nine minutes. Next up was the Category Three Puerto del Ordal, the only climb of the day, and the order over the hill was the same as the second sprint. 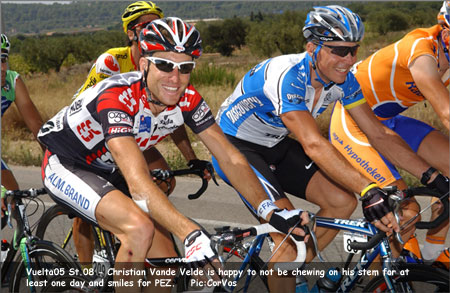 Coming down the hill, the lead climbed up a bit, and at the final sprint of the day at Sabadell, it was Dockx, Gomez, Florencio. At this point there were 86 km to go, and the sprinters teams got on the front to try and bring the three men out front back.

With 53 km to go, the break was down to under 5 minutes as the trains chugged along at the front of the peloton. With 25 km to go, the lead was down to just over a minute, and the break was showing the suffering a bit on their faces. However, they held strong, and last until the 16 km to go mark before finally being swallowed by the charging peloton. 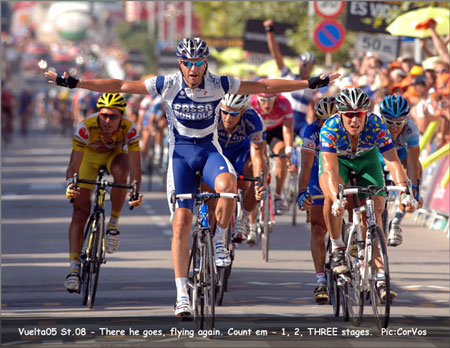 As to be expected, there were immediate counter-attacks. Three different Relax riders took their chances, but as usual, alone they didn’t last long. In the last two km, it was the Fassa train on front, with the usual suspects right behind. The course made a few bends through the city, and then hit the final straightaway. After a bit of juggling, Hushovd was on third wheel, with Pettachi at 5th. But when it came time to do his thing, the Ale-jet hit the after burners and took Thor at the line. The G.C. had no changes, with Heras still leading.

Vuelta a PEZ 2: A Day In The Mountains