La Vuelta A Espaсa got underway today in Granada Spain, and PEZ-Man Alastair Hamilton is there, armed with digi-cam and dark glasses. Our original photographer of the now famous “Daily Distractions”, this year we’ve asked Al to remember there’s a bike race going on as well… 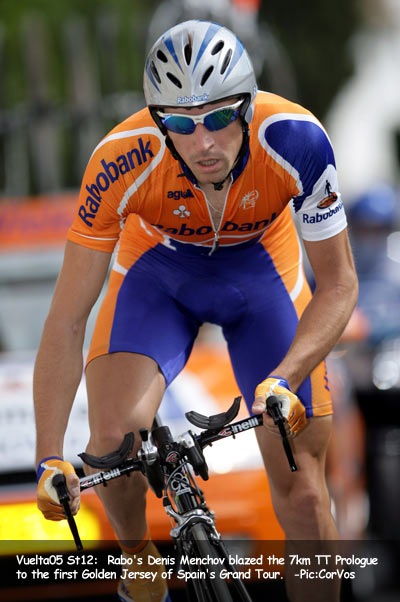 PEZ From Spain
After my 500-kilometer drive to the start of La Vuelta in Granada, it was a nice surprise to receive my free gifts as part of the official Vuelta press corp. This year they exceeded themselves, as we were given rucksack, hat, T-shirt, small stuffed toy, photographers jacket, pen and note pad and the CD-ROM to follow next week. It was worth it to sit through a press meeting, in Spanish and French, to introduce everyone on the race from chief of police down, and announce the new owners of La Vuelta, TV station Antenna 3.

Before this I had a chance to introduce myself to our new PEZ-mate, Abraham Olano, who was suitably impressed by PEZ’s riding in Germany at the Giant Tour last week (sort of). While waiting for my Wi-Fi hook-up to work I also received my nice AMD-HP umbrella and a promises of no rain. It was also interesting to see that Miguel Indurain got the same freebees as I did, except the jacket, and I think he looked a little envious.

Luckily (or unluckily) my hotel was on the finish line, so there was no chance of getting there for a siesta. So I had to make do with some work, taking photos for the Daily Distractions, what fun! With my new official “La Vuelta” photographer’s jacket I had “carte blanche” to go anywhere and photograph anything. The ladies were as usual, beautiful and you will see my work as the race unfolds, and I get my wi-fi figured out to transfer the photos! (Al has been instructed to not sleep until he’s sent us the first pics. – ed.) 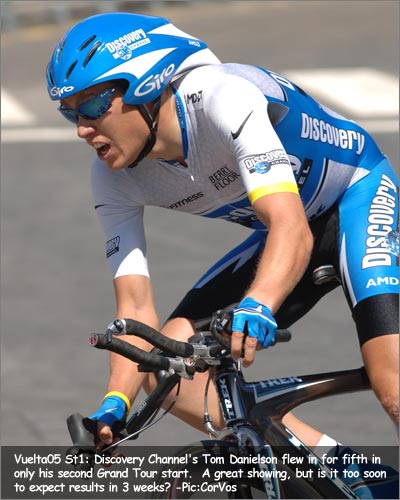 But What About The Race?
The Vuelta is underway and we could witness a changing odf the guard this year as some new faces were mixed into the top results of the stage 1 – 7km prologue. Taking top honours was Rabo’s Russian Denis Menchov, who’s obviously flying after some well-done post-Tour recuperation.

LaVuelta website reported that “Denis Menchov, the first golden jersey of the Vuelta 2005, said in a press conference that he didn’t expect this result and to win the stage. “This is my sixth year as pro and I failed on other occasions”. The Russian rider explained that during the year he has worked really hard and that he has had a good feeling about it. “I thought, he added, that I couldn’t compete with the specialists”. Menchov explained that after the Tour de France, he went to see his family in Russia, which was excellent to recover. “After that he worked really hard and it did work out, he added”.
Asking if he was a candidate to win the Vuelta, he answered: “I’m feeling good and I prefer to go from day to day. It’s not yet finished. I’m having confidence in my team”. The cyclist of Rabobank explained that he has to have great legs to do well in the mountains and not having bad days cause one bad day can ruin everything.” 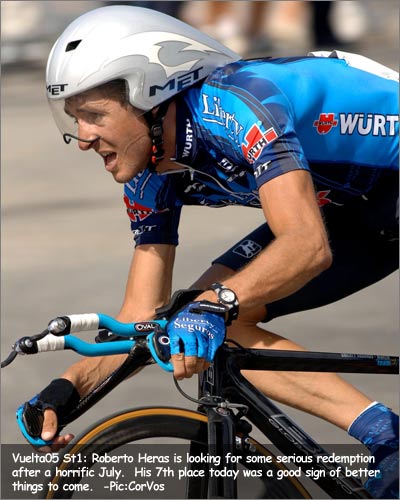 Past winner Roberto Heras looked much better than his Tour de France debacle placing 7th, while 2-time Giro winner Gibo Simoni appears to have been working on his time trialling, coming home in 10th.

Two surprises of the day are Americans Tom Danielson who impressed with 5th place, and Christian Vande Velde rolling on Simoni’s heels for 11th.

The Vuelta typically produces some great racing, so stay tuned for more of the PEZ-eye view from Spain.

La Vuelta a Espaсa 2005: The Contenders