French Team Cofidis won some much needed glory today when Leonardo Bertagnolli scored the win at a gallup over new camiche d’oro Brad McGee and the ever-present J-A Flecha.

It’s Sunday and the Pez-Crew is out riding, so today’s Vuelta stage report comes direct from the Vuelta press corp. So grab your passport and enjoy a little “continental” flavor from this Spanish translation. 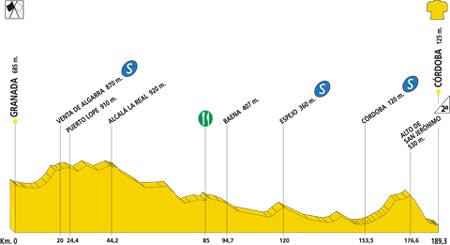 The second category climb, Alto de San Jerуnimo, which was waiting for the riders, 12 kilometres to the finishing line in Cordoba, has hurt more than anyone expected.

The stage started in Granada, on an easy way, gathering a delay that later riders couldnґt recover at the second part of the stage, when the started to arouse the rhythm. All 197 riders, taking part in this sixtieth edition of Vuelta a Espaсa, were facing a warm and sunny 189.3 kilometres, and maybe thatґs why they decided no to offer too much resistance when David de la Fuente y Herve Duclos Lassalle started a lonely adventure which happy ending was a little bit tougher. 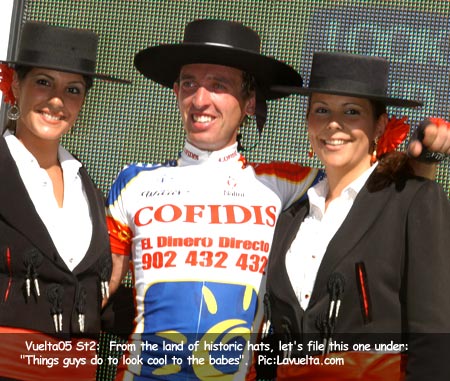 The break began at 24 kilometres, and got its largest advantage of 10:58. In that moment was when Quick Step team led the bunch. The Belgians didnґt impose a high rhythm not to burn out their ships before time, but they kept the break under control in every moment trusting to reach, with the bonus, Rik Verbruggheґs leadership.

Meanwhile the kilometres were passing by without something special occured, we could see Guiliano Figueras with problems, the whole time taking refuge in the car of the medical services. Finally, the Italian gave up after 67 kilometres of the stage and this transformed the rider into the first one to abandon the race.

Already in the final part of the stage, on the Hill of San Jeronimo, David de la Fuente, was catched up after riding alone for more than 140 kilometres. His escape companion had already been catched up a few kilometres earlier. The climb of second category was a pitfall for all teams because nobody could avoid that the stage went nuts and was full of attacks. 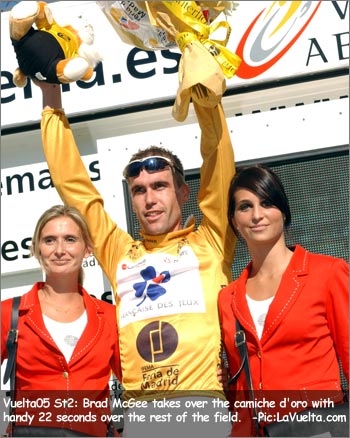 Finally, the good escape was the one of the Cofidis rider, Leonardo Bertagnolli, on which nobody had an answer. The Australian Bradley McGee, another man wanting to be dressed with the Golden Jersey, showed an enormous demonstration of his power by catching up with Bertagnolli without being followed by the group of pursuers, in which we could find Flecha, Vicioso, Yus, Joaquin Rodriguez and Patxi Vila.

Already in the final sprint and given the doubts of the two men ahead about to moment to start their sprint, Juan Antonio Flecha almost could effect the first Spanish victory in this Vuelta, although at the end he had to content himself with the third place after Bertagnolli and McGee. The Australian is the new leader in the overall standings, leading with 22 seconds on Bertagnolli and 31 on Flecha who, besides of being third, is the first Spanish rider of the Vuelta. 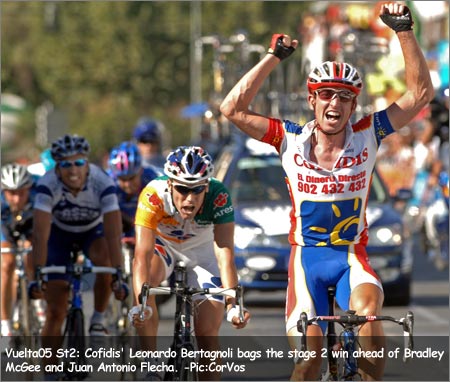