So here we are, the last stage of the last Grand Tour of the year, an exciting Vuelta with a worthy winner in Alexandre Vinokourov of the Astana team, good news the team passed the medical tests yesterday morning, no age test for that old sprinter Zabel though! 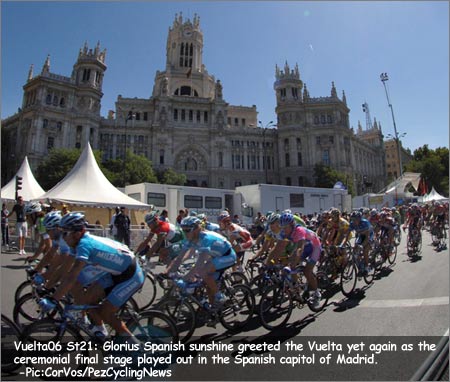 Interesting to see that Floyd Landis visited the race today, accompanied by now retired rider Angel Perdiguero, they went into the Phonak bus to see his old team mates and went to congratulate Vinokourov in the Astana bus, looked a bit strange, but well….

As usual with final stages it was a slow start, in the first two hours they had only covered 60 kilometres, but after that things livened up with an attack from Frйdйric Bessy and Luis Perez (Cofidis), Chris Horner (Davitamon-Lotto), Бngel Vallejo and Raъl Garcнa De Mateo (Relax), Oscar Pereiro (Caisse d’Epargne-Illes Balears), Pierre Drancourt (Bouygues T/com) with 30 kilometres to go to the very end. 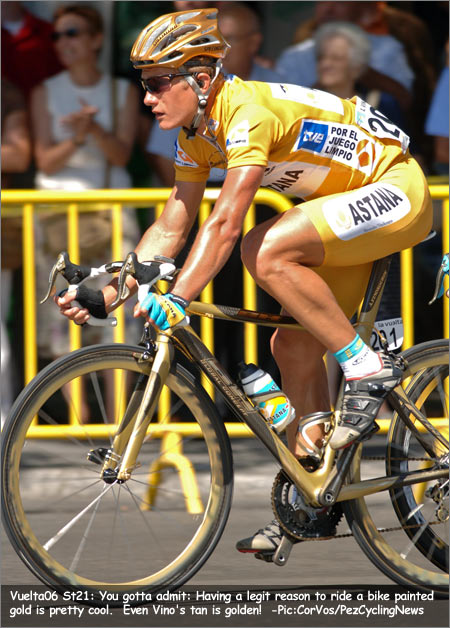 The six finishing circuits are in the centre of Madrid (not like the world champs last year), up and down the Passeos’ de la Castellana and Prado, finishing at the Plaza Cibeles, very nice part of the City, a Madrid version of the Champs Elysee, but without the high prices!

Credit Agricole, Milram, Gerolstiener and Phonak are on the front of the main bunch, “bus puncher” Petacchi has won here in the past, but could suit his team mate Zabel, very likely Hushovd is going to try again. Two 6 kilometre laps to go and things are not looking hopefull for the escapees as the gap is down to 14 seconds, the speed is now nearly 60 kilometres per hour, as they are about to start the last lap the race is all back together. 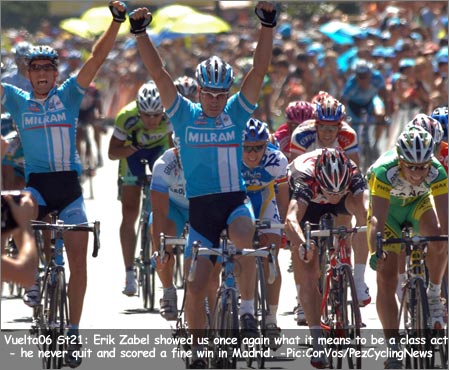 The Last Lap
CSC take over the lead work, Stuart O’Grady must be on form today and he has been close to a stage win already this Vuelta, Milram and Gerolstiener are also close to the front. The last sprint starts with a Rabobank rider jumping from the last corner to be pulled in by Milram and Liquigas, then Marco Velo kicks hard with Eric Zabel and Phonaks Aurelien Clerc on his wheel, Zabel comes round him for the millionth win of his long career and Thor Hushovd gets past Clerc for second, but left it very late.

And just like that it’s over for another year, Valverde did well, but is still getting it in the ear from the Spanish press, Vino, did a great job as did his team, Kashechkin will be big in the future, Egoi Martinez was great in the mountains and Danielson showed some of his class. You have to feel sorry for Sastre, fourth in the Tour and Vuelta and worked hard for Basso in the Giro and next he’s riding the Worlds, hard year.

Best thing on the last day? If you ever get the chance to hear the Kasakh National Anthem, well…… 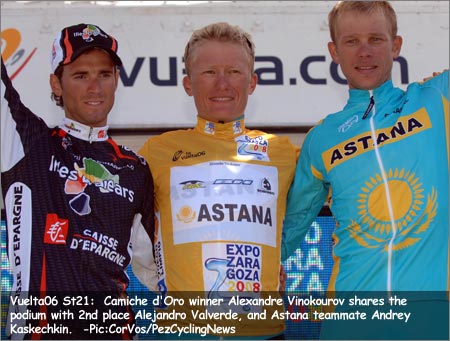 And thanks to everyone who tuned in to PEZCycling for our Vuelta coverage – we’ll be live and in person in Salzburg later this week for all the Worlds coverage we can muster – so get your rest now!