Try saying that headline after you’ve had a couple of cold ones. And I don’t mean mineral water, which, I’m sure, Robert Forster and his team-mates will be celebrating with tonight. The Gerolsteiner speedster came up with a sparkling sprint to nab the German squad their first win of the Vuelta.

And he couldn’t have timed it better. Chances for the sprinters in the final week of the Vuelta look rather few and far between so there will be quite a few guys kicking themselves that they missed out today. 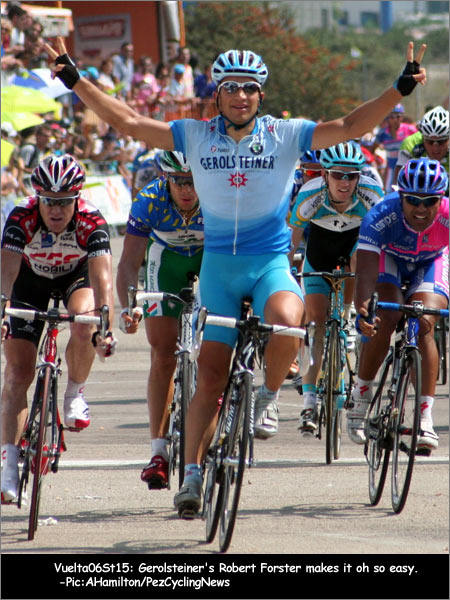 Gerolsteiner have also had pretty wretched luck with half the team abandoning, and countless behind the scenes niggles – lost luggage, broken machinery, transport mishaps, etc. Davide Rebellin also decided overnight that he’d had enough and packed his bags. But things look rather bubblier tonight.

Especially for Forster who now has two Grand Tour stage wins this season; he also took the honours on the final stage into Milan in the Giro d’ Italia.

Stuey O’Grady was damn close to nailing the win that his injury-ravaged season could do with, but Thor Hushovd will be more than happy to have grabbed fourth and extended his lead in the points competition.

Overall, there was no change after yesterday’s TT, with Valverde holding the best part of a minute on Andrey Kashechkin. It remains to be seen what will happen tomorrow, however. Apparently, the UCI vampires turned up at the team hotel to blood test Kashechkin and Vinoukorov this morning, but they’d already left in the bus for the stage start.

If there is anything to report, you’ll see it in Eurotrash tomorrow. If the UCI decide that Astana are at fault (which is a possibility, given the current relationship between the two groups) they’re likely to take a dim view of any missed test – regardless of the reasons.

Today’s race was a pretty leisurely affair. The profile suggested it could have been an all-guns-blazing charge of the light-headed brigade, off the plateau and down to the coast at Valencia. Instead, with the riders heading to the finish at the Ford motor factory (yes, really!), the feet were distinctly off the gas and the pedals were most certainly not to the metal.

The only guys who wanted to make a go of it were Kjell Carlstrom from Liquigas and Relax breakaway artist Jorge Garcia. They managed to pull out a six-and-a-half minute lead, but the sprinters’ teams increased tempo enough to keep them in range.

Carlstrom had to let go of the Spaniard mid-way through the stage, but Garcia held out until he was swept up 15kms from home.

Tomorrow is a much-needed rest day as the riders wait for Tuesday’s firestorm of a stage to the Calar Alto observatory. Keep it Pez for all the latest action!

PEZ T’s For Back To School!