Last year it took Italian champion, Paolo Bettini (Quick Step) until the 16th stage of the Vuelta to add to his palmares; this year he was in more of a hurry as he out-dragged super-sprinters Thor Hushovd (Norway & CA) and Robbie McEwen (Australia &Lotto) to take stage two into the Moorish city of Cordoba.

With 100 metres to go it looked like ‘Little Robbie’ was going to add to his 2006 Giro and Tour stage victories, but lead-out man Fred Rodriguez (USA) had dumped him out into the wind on the hot tarmac too early and it was the surprising Bettini who was too quick for Hushovd; the man with the Australian champion’s bands on his sleeves was only fourth. 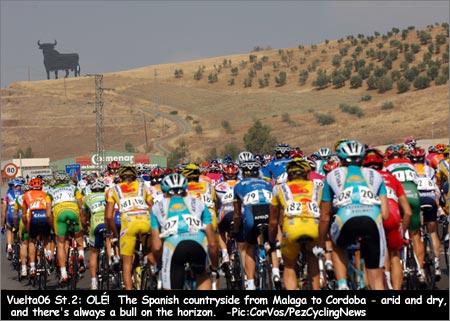 Third wasn’t too much of a revelation if you had spoken to Pez diarist, Dario Cioni (Italy & Liquigas) who told us last night that his team mate Luca Paolini (Italy) was in fine form. The Milanese 1999 Worlds under 23 silver medallist showed great sharpness in the mкlйe at the finish, switching and diving for position right to the line. He must be a good bet for a stage win in the days to come.

After today’s performance there will now be no reservations amongst his Liquigas team mates about his ability to win a stage and this will surely reflect in their riding for him in the finales.

It wasn’t all bad for Hushovd; his 12 seconds bonus for second propelled him into the leader’s golden jersey to add to his Tour yellow from earlier in the year. Bettini must surely fancy a day or two clad in gold though as he is only two seconds behind the big Norwegian.

Third on GC is the man who crossed the finish line first from the CSC squad in their rapid team time test prologue victory at Malaga last night, where today’s stage started – Carlos Sastre (Spain). The little Spaniard will go back to biding his time until the mountains now. Sastre punctured inside the last three kilometres, but new regulations dictate that any crash or mechanical failure inside the last three kilometres entitle the victim to the same time as the peloton, so he is at seven seconds on Hushovd.

The last 10 kilometres were typical of a sprint stage with a long, snaking line testifying to the fact that the tempo was at warp level. Teams ‘in the house’ were Liquigas, for Paolini; Lampre, for Napolitano; Lotto, for McEwen and Milram, for Zabel – it’s maybe too much to expect Pettachi to be up-there already.

As the finish neared, Saunier and in particular David Millar began to appear at the head of things on behalf of Spaniard, Ventoso, who wasn’t too far away at the death in sixth place. Milram controlled the finale well, but a stage like this isn’t hard enough for Erik Zabel and tenth was the best he could do against younger legs. 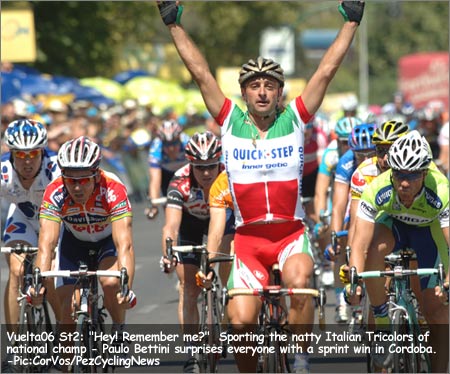 The compulsory suicide break by wild-card, non-ProTour rider act of the race was played out by second year pro Mario De Sarraga (Spain & Relax-Gam) who was away ‘en seule’ from three K out until 30 K to go.

His lead peaked at 13 minutes but he was caught by Thierry Marichal (France & Cofidis) and Benoit Joachim (Discovery & Luxembourg) who had countered with 34 to go. (A Disco-boy in a hopeless counter-attack – jeez, it’s all changed since Lance retired) The two dropped Sarraga at 25km to go before being caught themselves with 13 to go and by then it was finale time and the curtain was up for the lead-out guys.

Despite McEwen’s faux-pas today, he’ll be back – watch this space.