Another predicted mass sprint finish, another surprise victor and yet another breakaway for the most aggressive rider from this year’s Tour de France’s, David de la Fuente.

Being the longest stage of the Vuelta06 at 219km and with 40 degree temperatures the day was always going to be a tough. Neither the heat, the distance nor the inevitability of a sprint finish could stop David de la Fuente (Saunier Duval), Herve Duclos-Lassalle (Cofidis) and Enrico Franzoi (Lampre) from trying their hand though in a long breakaway from 210km to go. 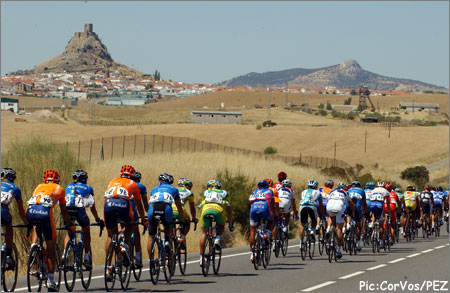 At least there was a little bit to look at…every once in awhile.

It was a case of ‘Haven’t I seen you here before?’ for De la Fuente and Duclos-Lassalle who were in an almost identical break together on the 2nd stage of the 2005 Vuelta. The move that day was eventually doomed by the chasing peloton and history looked like repeating itself as Credit Agricole, Lotto-Davitamon and Milram were all keeping the break within a reasonable distance. The trio out the front were working hard and gained a maximum gap of 7m45s but with so many super sprinters in the Vuelta peloton this year, would they really let a trio steal their glory on only the 3rd stage? 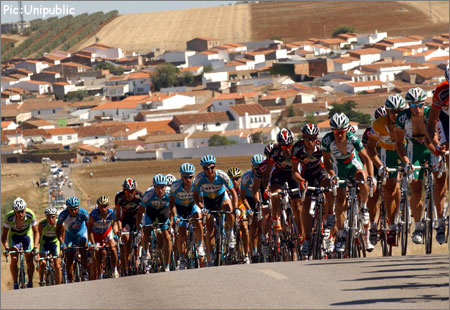 Ok, so today was not completely flat by any stretch of the imagination.

Robbie Mac is never one to give away a possibility of a win so he sent his Lotto Davitamon boys to the front, Thor Hushovd sent his squad to the front to protect his leader’s jersey and Erik Zabel, still searching for that elusive win had the Milram boys up there too. The gap to the break started dropping rapidly from the 40km to go mark onwards and with 25km to go it was down to only 3min. In 2005 De la Fuente was caught with 25km to go, so he was 3min better this year but nothing was going to stop the sprinters having their day with the break eventually being caught at 5km to go. 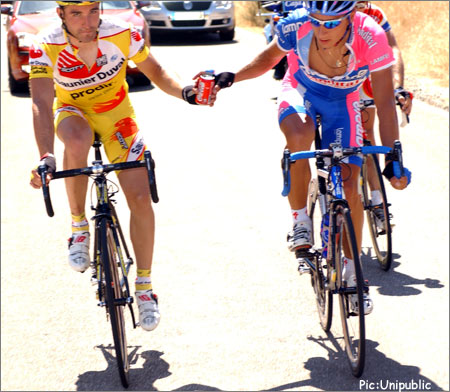 The member’s of today’s elite break club share a Coke before being swallowed up by the mighty whale.

It was now time for a sprinter’s Battle Royale! Bettini (Quickstep) was keen to repeat his surprise victory from the day before over the true sprinters like McEwen, Hushovd and Zabel who was Milram’s main man today after Petacchi stated that he wasn’t in the form necessary for the win. With 2km to go AG2R took over on the front of the peloton as they tried to set up Nazon, but it was all a bit too early and they died a quick death on the front and it was at this point that reformed bad boy, David Millar (Saunier Duval) launched a brilliant attack almost getting the win, but he was caught with 500m to go. 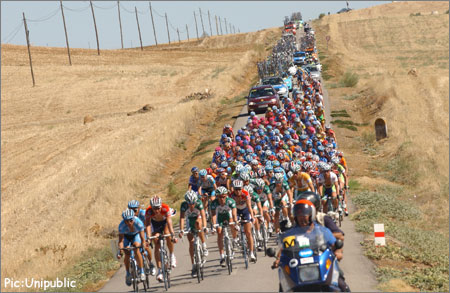 A nice downhill every now and again provided a nice blast of hot air to the face…without having to pedal.

Straight after the capture of Millar, Fast Freddie led McEwen out, but it was just a touch too early as McEwen was rolled in the last 80 metres to only finish 5th. The man who rolled him to get the win was the big surprise though – Francisco Josй Ventoso of Saunier Duval. Previously unmentioned when talking about the day’s favourites, Ventoso rode a perfect final kilometer to time his sprint to perfection and cross the line with time to throw his hands in the air, finishing ahead of Hushovd (Credit Agricole) and O’Grady (CSC). 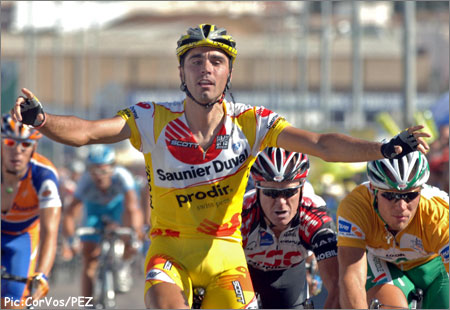 Francisco Ventoso confirmed today what he’s been threatening for most of this season – a bunch sprint win. He’s been in the mix of tons and tons of sprints all year, and finally got the big win today.

A great day out for Saunier Duval, with De la Fuente away almost the whole day, a superb late attack by David Millar which almost succeeded and then a perfect sprint by Ventoso to actually take the victory. Before the start of the Vuelta, director sportif of Saunier Duval Joxean Fernбndez stated that, “Thereґs only one goal: victory. To accomplish it, the team will need a lot of attacks and a fighting spirit”. Saunier Duval’s fighting spirit was perfectly demonstrated today – the yellow clad amigos will be celebrating tonight!