Well, someone has to take charge of a long flat stage and it’s probably a bit easier when you’re named after a powerful Norse god. The Credit Agricole sprinter has enjoyed a great year and now has a Vuelta stage win to go with his time in the Maillot Oro.

The peloton thundered into Leon at perilous speed, touching 60 miles per hour thanks to the efforts of Liquigas and Milram. The blue boys looked like they had things in order until David Millar, showing stronger each day, infiltrated the train for Saunier-Duval.

Millar put in a huge churn of the wheels for his mate Ventoso into the final 500 metres. Milram went again through Petacchi on one side of the road, but T-Mobile’s Andre Griepel came up the middle. 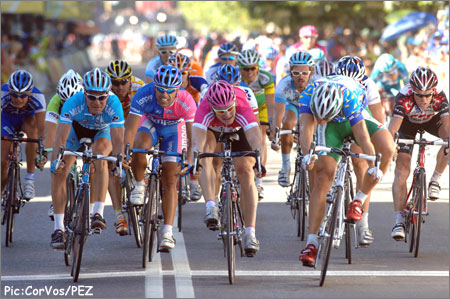 Can anyone win a stage by enough to throw up some arms please? These head down finish line shots are bumming me out.

Hushovd calmly pick pocketed him from behind for the stage win, with Erik Zabel rounding out the day’s podium placings.

It wasn’t the most riveting of stages to watch today, as we only had the briefest flurry of early escape attempts – Walter Beneteau deserves a mention as he was involved a couple of times, But, as per usual, one foolhardy soul was dispatched to ‘liven up’ the long, hot flat proceedings. 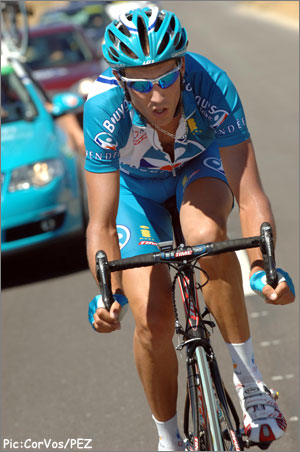 Today’s headbanger (who stuck up his hand and said ‘Yes’ when his team-mates were, presumably, sitting on their hands, looking at the floor and whistling) was Matthieu Claude from Bouyges Telecom.

Bet your ass he’ll be paying more attention from now on after almost 150km on his own in the lead. He’ll at least have the satisfaction of knowing he’s done his bit for the sponsors, but it was never a serious possibility that he’d stick it out until the line. 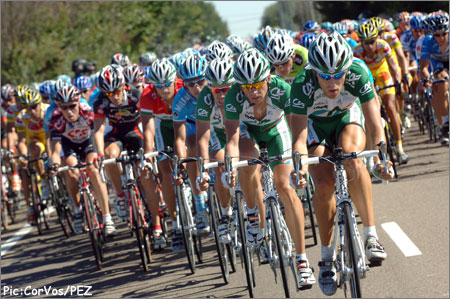 Credit Agricole had the right idea today – working to ensure a bunch kick for Thor was spot on.

Today was always looking like sprinter territory, even though Davitamon-Lotto will have taken their feet off the gas with the time-cut elimination of Robbie McEwen last night. Milram, Liquigas, CSC and Lampre all have fast men here who fancy their chances but no-one could get the edge on big Thor this afternoon. 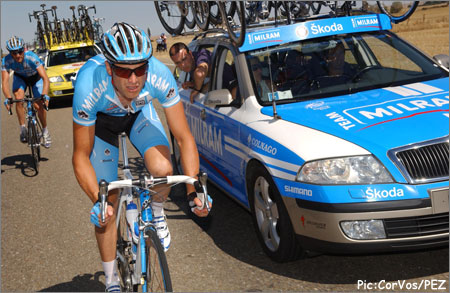 Perhaps there was some miscommunication between Ete and Ale today – whatever, it was still cool to see the Ale-Jet back in the mix of a bunch sprint – it’s been a long, long while. Look for a stage here soon.

It always makes me a bit suspicious when I see two sprinters from the same team in the top few placings – were Zabel and Petacchi on the same page today? Did Ale-Jet get a teeny-weeny bit jealous after the German’s stage win the other day? 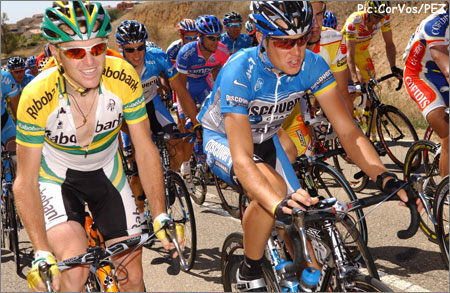 There was a lot of time for discussion today…young William Walker and Tommy D had plenty of time to while away the time in idle conversation.

Another interesting point today: Matthieu Claude’s lead went back up by about half a minute when the peloton stopped for a ‘mass natural break’. I think they were a bit bored by proceedings and thought they’d add a bit of spice by giving him almost 4 minutes of an advantage inside the last 50 kms. Didn’t work though as they hauled him in comfortably.

Tomorrow should be a lot more entertaining as we have another big climb to the finish on the Morredero. Keep it PEZ!