After so many, many close calls, podium appearances, and also-rans, everybody has to profess in some way to being a fan of Erik Zabel. You can’t help pulling for the guy in every sprint – maybe today will be the day…no…maybe tomorrow? At long last, the dry spell came to an end in fantastic fashion in Stage 4 of the Vuelta!

Today’s 4th Stage of the Vuelta promised yet another sprint finish, except this time, a sprint would be guaranteed without nearly 6 hours to get ready for it. The Vuelta’s longest stage was followed by one of its shortest (thankfully) with 142 km covered in under 3.5 hours. 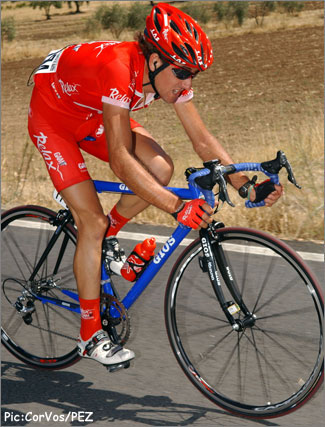 Of course, it would not be the Vuelta without some TV time for the Relax team. Relax has done anything but since the Vuelta started, taking great pains to make sure they make the most of every second of the race. Today, it was Raul Garcia who got the nod for the break. So he rode out front, all by his lonesome for a long time and then, oh drama, the field gots to moving, and he gots to fading, and the field gots to opening its gaping craw, and voila, Garcia was no more. 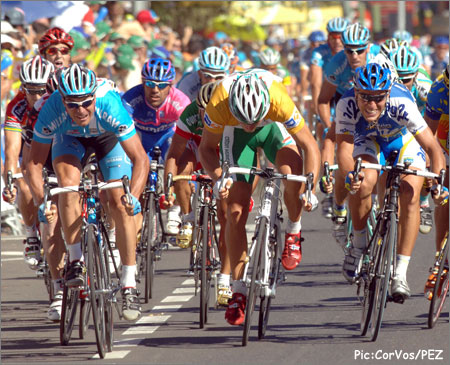 A sprint was on the menu at the start of the day, so a sprint is what was had. For once it seems that everything went Erik Zabel’s way. It was as if the sun broke through the clouds and shone down upon the aging sprint star…or maybe in this heat, it was more like the clouds gathered over Ete and offered him some respite from the pizza oven. 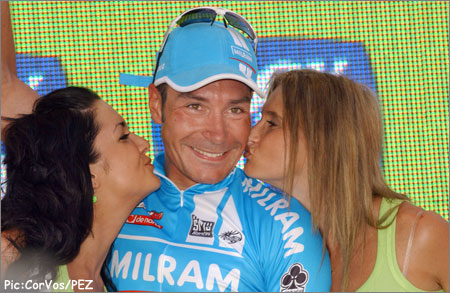 Erik Zabel looked pretty bummed about his win today. Eat it up, and lest anyone forget it: Zabel is still the most successful active bike racer in Europe at the moment, his tally creeps ever closer to 200 wins. 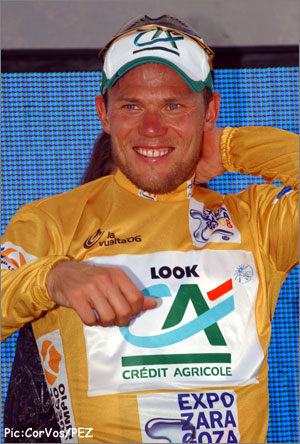 Thor Hushovd kept tight hold of his Maillot Oro today, but he won’t be seeing any part of it again for at least another year. Tomorrow’s stage finishes atop the HC Covatilla. Let the GC battle begin!

For more fun, head to TheBikeGame Dot Com
Like PEZ? Why not subscribe to our weekly newsletter to receive updates and reminders on what's cool in road cycling?