Sergio Paulinho gave Astana a going-away present, or Discovery a house-warming gift, depending on how you look at it with a fine opportunist’s win in the lumpy tenth stage of this year’s Vuelta. For those keeping count, that’s three-in-a-row for the Astana boys.

The little Portugese, who goes Disco for 2007 and whose best result until today was the Olympic silver behind Italy’s Paolo Bettini in 2004 was smartest of the 16 survivors of a initial breakaway of some 24 riders which went early in the stage. The parcours ran along Spain’s northern, Bay of Biscay coastline on a route whose profile resembled a fine-toothed timber saw. 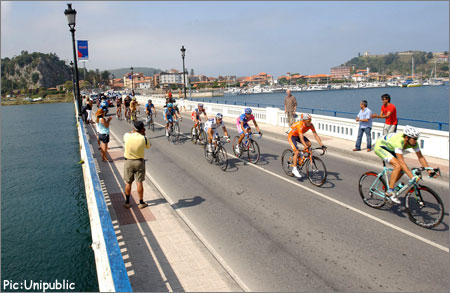 This stage was always destined for a break-away, the only questions were how many, how much time, and what team would profit the most?

CSC commited a rare tactical blunder by putting no one in the break who could influence the GC and were punished by having to chase all day. Nicki Sorensen did make it up for the Danska boys but couldn’t save the day with a stage win. Carlos Sastre will miss that gas that was burned-up today later in this race. 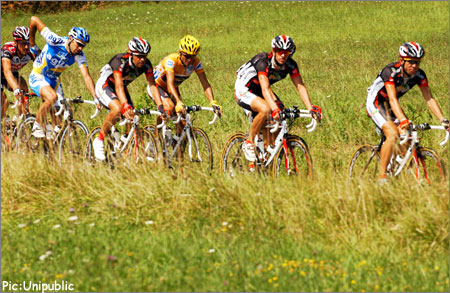 The Illes-Balears team pulled off a tactical coup by getting potential GC threat, Vladimir Karpets up the road. Then the race leader’s team got to sit back and enjoy the view of CSC slaving at the front all day.

There were no such faux-pas by race leader Valverde’s team, Caisse D’Epargne who had big Russian, Vladimir Karpets in the right place Indeed, at one time the man with enough hair for a team pursuit squad was leader on the road – before CSC strapped on the leg-irons that is. 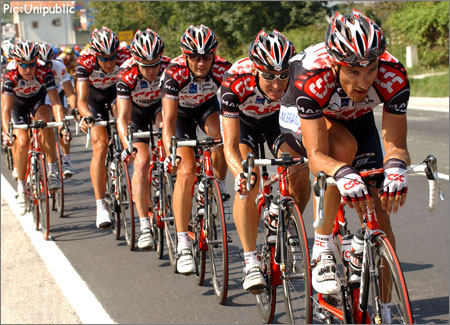 CSC took a fair number of lashings on the front today, but look at the bright side: Fabian Cancellara got some great Worlds TT prep.

Astana too, with Kashechkin in second on GC got it just right and not only did Paulinho take the stage he moved to tenth overall, one place behind Karpets new position. 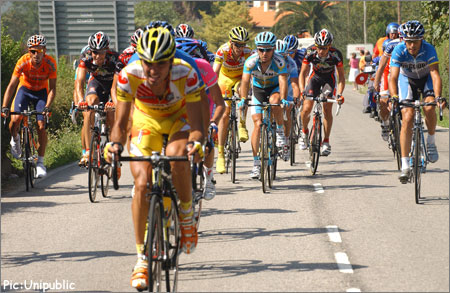 Late in the stage, the once well-oiled machine of a break turned to utter mayhem as all tried their hand at getting away for the stage win – no one wanted to go to the line with Ventoso in tow, that’s for sure.

With three kilometres to go it looked like the stage was going Saunier Duval”s way as David Millar shepherded early stage winner and man with a big sprint, Francisco Ventoso with some sefless riding which bodes well for his World’s time trial assault. But even the class of Millar couldn’t contain a breakaway full of men thirsty for cava and that nice view from the podium. 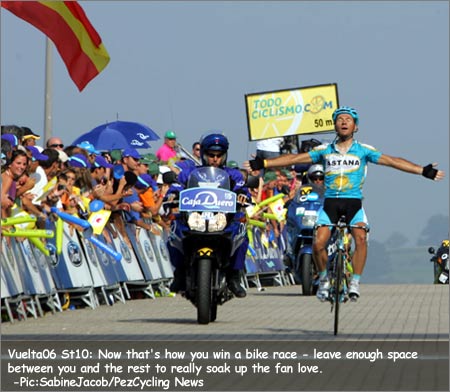 Pez diarist Dario Cioni (Liquigas), Karpets and Iban Mayo (Euskaltel) all tried but once the 2004 Portuguese chrono champion got the gap inside the last kilometre it was all over. The top three on GC remains unchanged but the CSC masseurs have the hardest job tonight.

Tomorrow’s Fun
Tomorrow’s Stage 11 could well provide another opportunity for the pain-loving, stage glory seeking breakaways. The first 130k is rather lumpy with three categorized climbs (Cats 1,2,3!). Depending on the mood of the field this could mean any number of things – carnage, status quo, or breakaway.

A break looks by far like the best bet – perhaps CSC can do a better job of getting a break in their favor: perhaps O’Grady?

If one of the big sprinters is feeling the love though, the stage could end up bunch sprint style in Burgos. The final 40k is a virtually flat run-in to a dead straight mile to the finish in Burgos.

MAGNUS Maximus: On The Rest Day

Be Your Own Coach: FAQ’s Part II