Another day at the Vuelta, another gut puncher of a course. Maybe easy on profile, but the Cat 3 climbs loom to hamper the riders today. Would Valverde continue his reign on top? Would one of the opportunists along the lines of a Bettini or a Dekker come out on top? With the ITT tomorrow would there be a surprise attacker? Check inside and find out….

It wasn’t too surprising to see a big group of 30 riders jump off and extend to a nice lead of almost 7 minutes for the first part of the race, leaving Caisse d’Epargne to take their rightful place at the front of the peloton and slowly begin to reel in the group up front.

Eventually Quick Step sent a man up there, Milram offered help as well, and the sprinters teams began their assault on the lead the front group had accumulated, and it began to appear as though a bunch sprint would indeed be the result. Although the group up front had the likes of Boogerd and Rebillin on board, as Liquigas, Milram, and Quick Step ramped up the speed, the break began to lose their advantage. 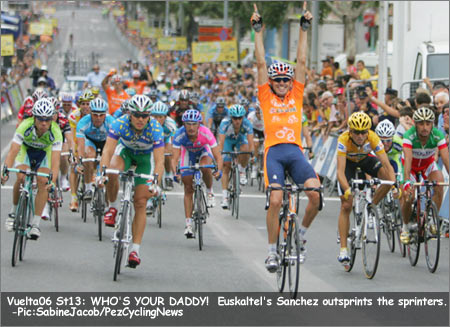 As rain began to fall in Cuenca, it looked rather apparent that the break was doomed. Cycling Mathematics 101, at your service! At 20km to go, the breakaway was rubber necking to check out the hot chick behind them. Said hot chick being the peloton barreling towards them at 65km/hr!! The break was assimilated at the foot of the last climb of the day the Alto del Castillo.

Renй Haselbacher of Gerolsteiner was the first to blot, but he was quickly reeled in and Di Luca countered. Valverde emerged and dragging Bettini and Sastre with him to close down Di Luca. The erstwhile Luis Perez of Cofidis made a jump as well. The group of chasers swelled to about 15, all the big names therein. They went over the top of the climb and began the descent, with a small lead in hand, and while they swept up Perez, Samuel Sanchez of Euskatel leapt off the front. It would be the descent, and then the finish!

Sanchez powered away and held his lead, head down and teeth grinding the whole way, to take a fine finish just barely in front of the hard charging Thor Hushovd.

Tomorrow may see a shake up in the GC, so stay tuned to Pez’s coverage of the Vuelta to find out!

POWER CRANKS Test: You Can Run…