Once disgraced doper David Millar scored a huge win for himself – and ‘clean’ riders alike- at today’s 33km Vuelta ITT. After only 2 months back to racing – you gotta respect a man who let his legs do the talking when all of cycling
is being watched with a skeptical eye from the public and media.

Often the first individual time trials in the big Tours are fairly long, flat affairs – but not in the Vuelta, they like to do things just a little differently in Spain. This time trial may only be 33.2kms long but it contains numerous obstacles for the riders, sharp corners, small hills and one major difficulty – a cobbled 3rd category climb Ѕ way through the stage pitching up to 10% in places. 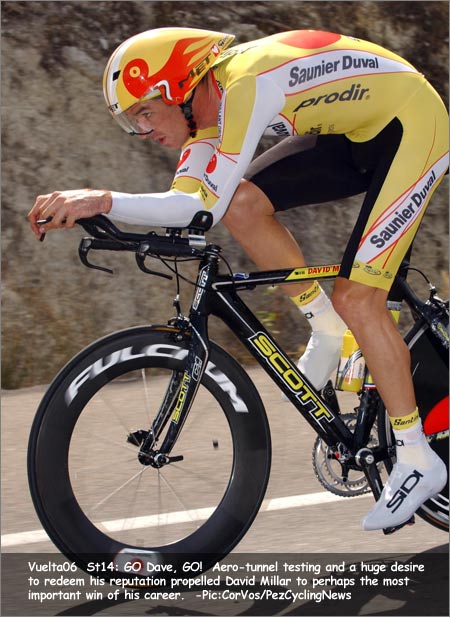 The first rider of the 158 to start today on this testing course was Cyril Lemoine (Crйdit Agricole). Maybe Cyril being the last man on GC in the race has been resting up these last two weeks as he came out of the blocks absolutely flying to set a very impressive time of 43m14s giving the Frenchmen an average speed of 46.18kph. This quick time was actually to stand for quite a while until time trial specialist, Fabian Cancellara (CSC) came home with a time of 40m54s. Cancellara along with David Millar (Saunier Duval) and Alexandre Vinokourov (Astana) were the nominated favorites before the start and the Swiss, Cancellara confirmed his favoritism with a very quick time.

No other riders could get close to Cancellara’s time early on but many tried. His team mate Stuart O’Grady came the closest of the early runners at 54s down and Magnus Backstedt (Liquigas) also did a very quick ride to finish only 2m01s down. The big man’s ride was even more impressive considering the 3rd category climb in the middle of the stage didn’t exactly suit him…he lost nearly a minute on the climb alone. 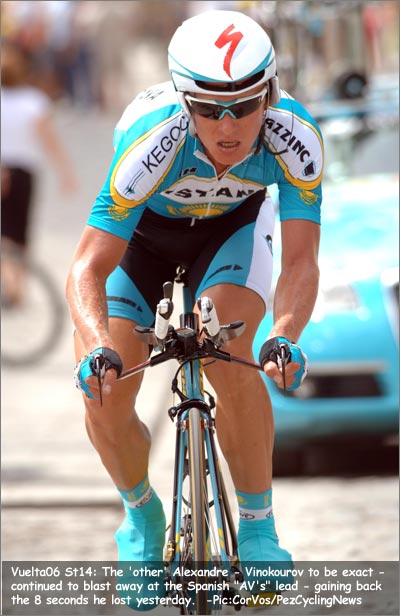 The last of the time trial specialists to go before the GC men came out to play was David Millar. The Scot started well being only 10s down at the first check and was then only 11s down at the second check at the top of the hill. David then powered his way down the descent taking good CLEAN lines through the corners to come home less than Ѕ a second better than Cancellara. Millar has been flying all Vuelta so far, setting up Ventoso in the sprints and being in a couple of breaks but it was today where he really shone. The first truly impressive time trial for David in 2 years will do wonders for his confidence going into the Worlds where he hopes to reclaim his lost title.

Millar and his team mate Josй Gomez Marchante (4th in GC overnight @ 1m04s) may have themselves a slight advantage today over the other contenders with their Scott TT machines and setups. Both Millar and Marchante were amongst 4 Saunier Duval riders who visited the famous San Diego Low Speed Wind Tunnel at the start of the year to improve their positions relating to both their aerodynamics and to their power output. The same wind tunnel was used regularly by a certain Lance Armstrong and it seemed to work quite well for him! Marchante in particular is very hopeful of getting a spot on the podium in Madrid and he knows how important both this time trial at Cuenca and the final test at Vaciamadrid will be. 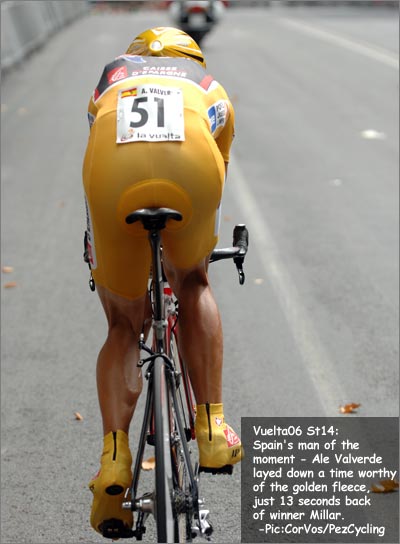 The other GC men that are hoping to claw back some time on Alejandro Valverde’s lead today are of course Vinokourov and Kaschenkin (Astana 5th & 2nd on GC) and CSC’s Carlos Sastre currently in 3rd place. They were all 8 seconds further behind Valverde today at the start of the stage though due to his brilliant sprinting yesterday afternoon which won Valverde the 3rd place time bonus. How crucial will those eight seconds be in the long run of this race? That is an area where Valverde has a big advantage over his rivals as he has the ability to pick up more bonus seconds in the sprints as the race goes on.

As the top ten on GC progressed through the race we got a good idea of who was on and who wasn’t. It was Vinokourov leading the way amongst the GC men at the first check where he was 24 seconds down on the best time of Cancellara but more importantly 8 seconds up on Valverde. That’s yesterday’s bonus back – can Vino now take more time over the hill? Well the answer to that question is yes…but only 2 seconds! Vino was now 10seconds up on a storming Valverde with the other GC men out of the race for stage honors, but all within a minute of Vino’s time – except for Di Luca (Liquigas) and Brajkovic (Discovery) who were the biggest losers from the GC men at 1m18s and 1m20s behind respectively after 20.7kms.

It was all up in the air after the 2nd check – would Millar hang on for the stage win – or would he be upstaged by the GC riders? Millar was only 5th at the 2nd check but the boy can descend! Vinokourov lost 21 seconds to Millar over the downhill and flat final 13kms to only finish 3rd on the stage 5 seconds down on David Millar. An incredibly strong performance by the Scot on his Scott as he took the stage win.

Overall Valverde did the time trial of his life as he increased his lead over all his main rivals except for Vino who took 8 seconds away from him – those same 8 seconds from yesterday. Whereas Vino had to work really hard for 41 minutes for those eight seconds, Valverde yesterday only had to sprint for 200m for his. Doesn’t quite seem fair does it? Whatever the case, today’s performance by the Caisse d’Epargne rider proved to both himself and the other riders that he is here to win this Vuelta. There is still 3 hilly stages and one time trial to go and of course anything can happen, but at the moment Alejandro Valverde is looking good in his Gold leader’s jersey. 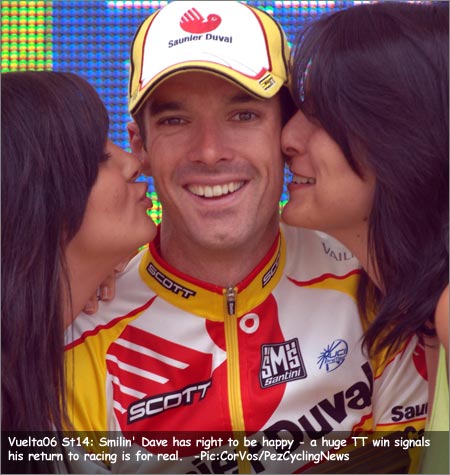 POWER CRANKS Test: You Can Run…

PEZ T’s For Back To School!