Well – about as close as you can get to it in Spain at least – . Today’s first lump in the final week’s triple scoop of mountains climbed to the summit finished at the planetary observatory of Cala Alto – and while Euskaltel’s Anton won the day, it was a gc slugfest not far behind him.

Are you rested? Are you out of widdle beddy bye bye and weddy to wide your bikey? Good. Because after all the rainbows and ponies of the rest day, it’s time for the brick-to-the-head of the last few mountainous stages of this year’s Vuelta! Valverde is the proverbial carrot, and the Kazakh death squad had better line the Spaniard up in their sights soon or relinquish any hope of winning this Grand Tour…

What to do: attack like crazy or rest up for the next two tough days?

What to do: attack like crazy or rest up for the next two tough days?

You have to figure, as riders, that if the stage ends at an astronomical observatory, You’re going waaaaay uphill, and so it was. And we think a lot of riders saw the day and said “I miss home” and split. Boogerd of Rabobank, Fabian Cancellara (CSC), Cyril Dessel (AG2r), Luca Paolini (Liquigas), Bernhard Eisel (FDJ), and Rene Haselbacher (Gerolsteiner) all thought home sounded better than this slog. And poor ol’ Alessandro Petacchi broke his hand in “sprinter vs. bus” battle royale, so he was gone as well and the remaining 149 souls pushed off to ‘enjoy’ the fireworks of the mountains. 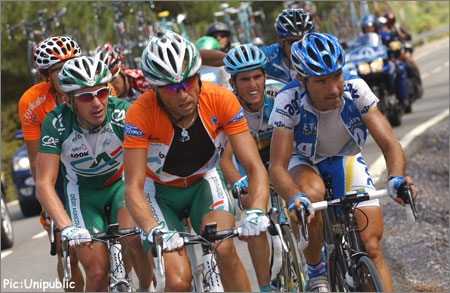 You love being in the break, you love it! Now say it with me…

Within the first kms, the inevitable large break was established, with the best placed GC rider being Discovery’s Egoi Martinez at over 9 minutes. They motored over the first bumps in the profile, and behind the reeling began, Bill Dance style: “slow and easy now!”

Though at first, it seemed the break, with no danger men in it, might have a chance if the peloton felt a little lazy with two more mountain days on tap. Riders dropped from the break, a few caught back on, but all in all, the clock started to wane in their favor as the peloton raced, echelon style, to catch them by the foot of the last, monstrous climb, only 4.5 minutes behind: 21 km long at 6.4%, and to top it off, thunderheads gathered over the finish area. 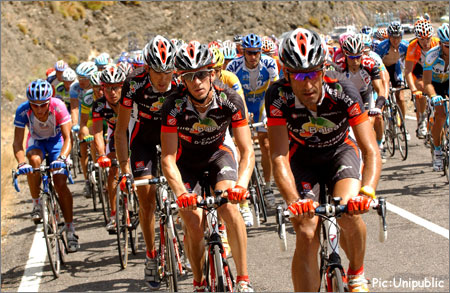 The Illes Balears team of Alejandro Valverde set a torrid pace leading into the final climb.

The break up front was sorting out who was for real and who was along for the ride, splintering in the early going, while behind Caisse d’Epargne decided to turn the screw and they inflicted their own damage on the peloton, withered by the crosswinds and the run up to the final climb. 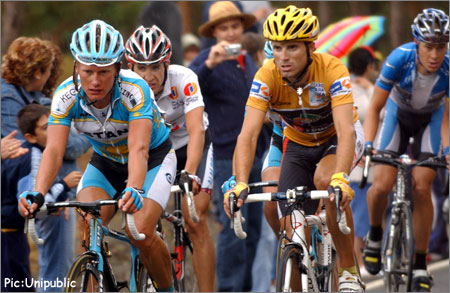 It didn’t take long before the peloton dwindled to the usual suspects.

The break was shattering, and some of the players tried some moves, doomed from the start. The only noticeable one was Disco’s Martinez, in the hunt for some mountain points, but the real story was unfolding behind, with 11km to go.

Redondo, Anton and Landaluze were the last remaining souls under 5 km to go. Behind them, maybe at 15 seconds, we had Valverde, Danielson, Sanchez, Martinez, Sastre, and Vinokourov. Just as suspected, the who’s who of this race, minus the other Kazakh, Kashechkin. And what a fine recovery by Tom Danielson, after having struggled in the earlier mountains to find some form. Beltran was here a moment ago, but Sastre’s pace had dispatched him. 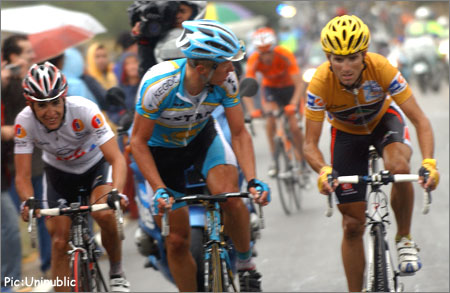 It wasn’t much longer till the group was only three: Vino, Valverde, and Sastre.

Vino had a dig. Then another, this time taking Valverde with him. Up front, the other Astana, Redondo, waited up for Vino. That left Igor Anton (Euskatel) alone up front. Seeing his chance, his head went down and his legs jackhammered as best they could while the cat and mouse continued on behind. Danielson also snuck back up to Vino and Valverde and took a dig, getting free albeit briefly. 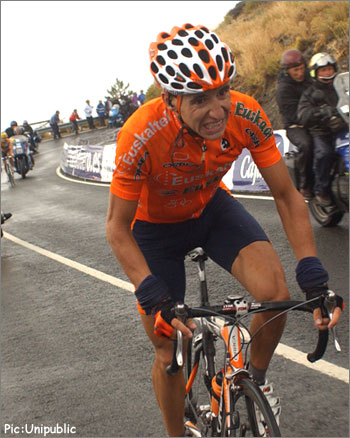 The ride of the day by far went to Igor Anton who rode the break all day and still managed a heroic effort on the final climb.

Anton solo’d away wonderfully, and while the riders behind eyed each other, he held on for a fine victory for the men in orange!

Valverde held off the others to take second place sprint rather easily it seemed, with Vino and Sanchez coming in right behind, and the other big names a few more seconds back. 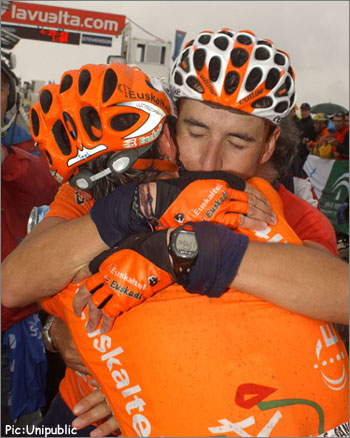 The Euskaltel boys have good cause for celebration after two stage wins in the past few days.

One has to admit, the Caisse d’Epargne team looks sharp, and their leader Valverde looks like his defenses are impenetrable. There are two mountain stages left – will Vino come up with the answer to the Spanish riddle? Stay tuned to PEZ and find out!