Can the Grand Tours of 2006 be any more exciting? Today, the once impregnable fortress of Alejandro Valverde finally succumbed to the onslaught of the unbelievably aggressive Alexandre Vinokourov. Vino was a big winner, but none moreso than Tom Danielson who came good on heaps of expectations.

Hell, bike racing is easy when you live by this sacred Eastern philosophy: attack when you can, and damn the consequences. Alexandre Vinokourov took his hammer to the Vuelta field and the man who suffered the most was the fabled Green Bullet, Valverde. Vino’ smashed him to rip away the leader’s gold jersey with one of the rides of the year.

It was the most dynamic day of racing all year (if we politely discount Landis, Basso and co. until all legal arguments have been put to rest). A tough mountain stage with 3 climbs and a rapid descent to the Granada finish.

In a Tour de France stage like this, most years nothing would have happened – the favourites would have let the break go, they’d sit and watch each other until 2 kms to go and trade a handful of seconds. 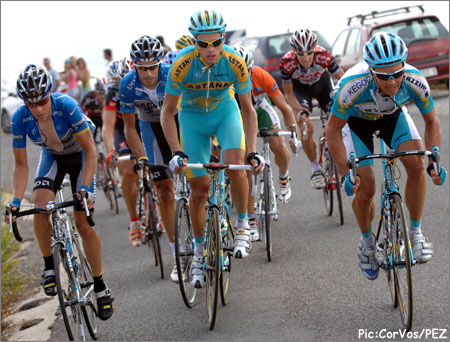 The break that made it all possible…

Most of the contenders had been forced into action as Tom Danielson jumped into a very early break, and the field was in bits before it even reached the first climb (Alto de Albondon). Sergio Paulinho was policing Tommy D’s move for Vino’s Astana team.

Danielson got up to 4′ 30″ clear of Valverde’s group so he was never challenging the race lead, but he was looking towards a podium place or top 5, so Astana, CSC and Saunier-Duval were getting twitchy.

Caisse-d’ Epargne were rolling smoothly looking after Valverde heading into the final climb, the Alto de Monachil, with 30kms to go. CSC came through to lend a hand with Stuey O’Grady and Nicki Sorensen. 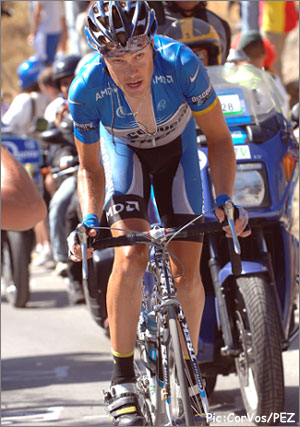 It didn’t take long for Tommy D to leave his break-mates behind on the big climb.

A couple of kms into the climb and, up front, Danielson has taken the initiative and attacked the break. Behind, Valverde is looking a bit queasy, struggling as the road steepens to 10%. Kashechkin attacks, Saunier-Duval counters and Valverde is gapped.

Danielson focuses on the task in hand and scrapes out a bigger lead. Behind him, Vino’ launches an attack! He roars away on the final pitches of the Alto de Monachil. He’s up to Kashechkin in an instant, takes a breather, then off again and soon they pick up Paulinho an Astana triple-whammy for Valverde. 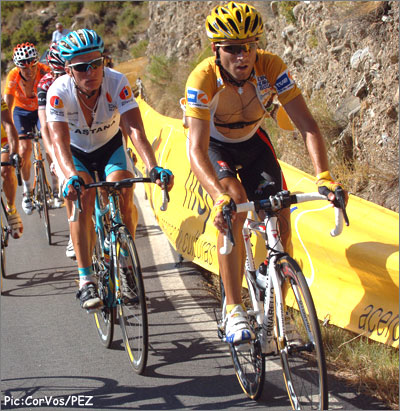 Alejandro Valverde probably thought that all was ok when he went over the top of the final climb with Vino…unfortunately for Valverde, Vino forgot his brakes at home.

Valverde manages to up the pace and claws himself up to the Vino’/Kashechkin group, with Sastre sitting on his wheel as the slope dies away.

It’s a brave miscalculation from Valverde, though. Not long after he makes the junction, Vino’ launches an all-or-nothing attack on the descent. Like a surgeon, the Kazakh makes the incision swift, decisive and accurate.

Vino’ rides like brakes were never invented, hurtling down in pursuit of Danielson (who is doing a great ride), and catches him 5kms out. Tommy D uses his head and tucks in, then works.

The gap is growing behind because Valverde has passengers on his back – Gomez Marchante, Kashechkin, Piepoli, Paulinho. The manic descent has gained Vino’ 80 seconds on Valverde. 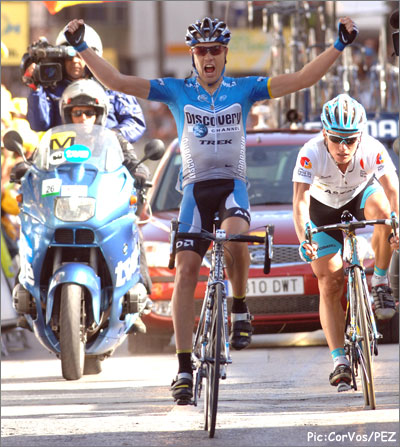 Well that’s a way to answer the doubters – Danielson came good in a big way today on so many expectations that have been heaped upon his little frame over the past few seasons.

Into the final kilometre, the gap keeps growing. Danielson is swapping turns with Vino’ but jumps him in the last hundred metres for the stage win – a huge Euro breakthrough for Danielson! Vino’ shoots over the line and watches the clock – he grabs the overall lead by 9 seconds!

A fantastic race, and let’s just hope that this time we don’t get any nasty sting in the tail. Valverde has taken a beating today, but he’s only 9 seconds behind Vino’ overall. And with Sastre less than two minutes back, Astana and Caisse-d’ Epargne better keep their eyes on the ball. 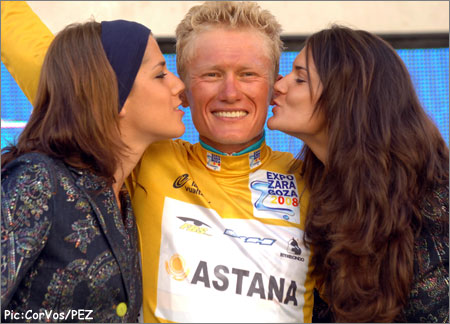 Unbelievable performance from Vino today – the huge question now is: can he defend his lead on tomorrow’s super tough finish on La Pandera?

Tomorrow we’re back in the mountains for one final mountaintop finish, so keep it PEZ for all the action.